newsinfo / Headlines
Headlines
Bracing for uptick due to Omicron variant 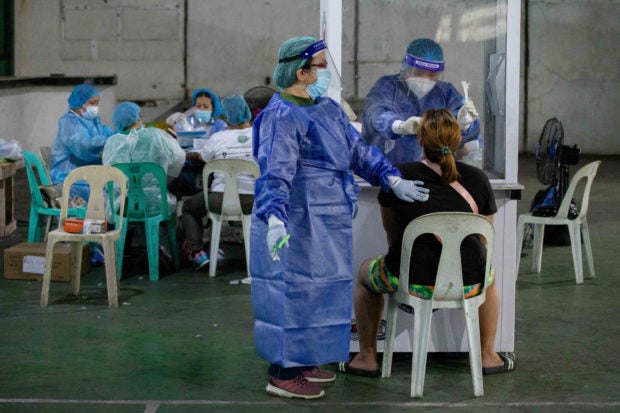 There were 909 people who recovered from the respiratory illness, bringing total recoveries to 2,768,389.

Citing the test results of 24,442 people last Sunday, the DOH said the country’s COVID-19 positivity rate was at 2.1 percent.

The DOH also reported in its Nov. 30 bulletin that 26 percent of intensive care unit beds and 17 percent of mechanical ventilators were in use.

As the government braces for an uptick in cases with the possible entry of the Omicron strain of COVID-19, the Philippines could suffer economically as the UK-based think tank Capital Economics expected tourism-dependent countries with low vaccination rates to be affected most if the new variant should wreak havoc globally.

“At this stage, we know little about the extent to which the variant has spread elsewhere in the emerging world, how transmissible it is, the severity of illness that it causes and its ability to evade the immune response. It is likely to take several days or weeks before we have more definitive information,” Capital Economics chief emerging market economist William Jackson said in a Nov. 29 report.

“But if it proves more virulent, the economic fallout would probably be largest in emerging markets in parts of Africa and South and Southeast Asia that have lower vaccination rates, more limited fiscal space and/or larger tourism sectors,” he said.

The Philippines’ tourism sector accounted for about a fourth of gross domestic product (GDP).

A separate report of Goldman Sachs Economics Research last week noted that the Philippines and Indonesia had been lagging behind in the region in achieving herd immunity with only 39 percent and 49 percent, respectively, of their populations inoculated with at least one dose.

Singapore led in vaccination progress with 86 percent of its population already jabbed at least once; Malaysia, 78 percent; Vietnam, 69 percent; and Thailand, 67 percent, it said.

In terms of funding to fight COVID-19, the Philippines’ war chest stood at $30.72 billion as of Nov. 15, equivalent to 8.7 percent of GDP, the latest Asian Development Bank (ADB) data showed.

Other Southeast Asian countries have been spending more against the pandemic: Indonesia (11.4 percent of GDP), Malaysia (43.5 percent), Singapore (30.9 percent), Thailand (21.6 percent) and Timor-Leste (16.1 percent), according to ADB estimates.