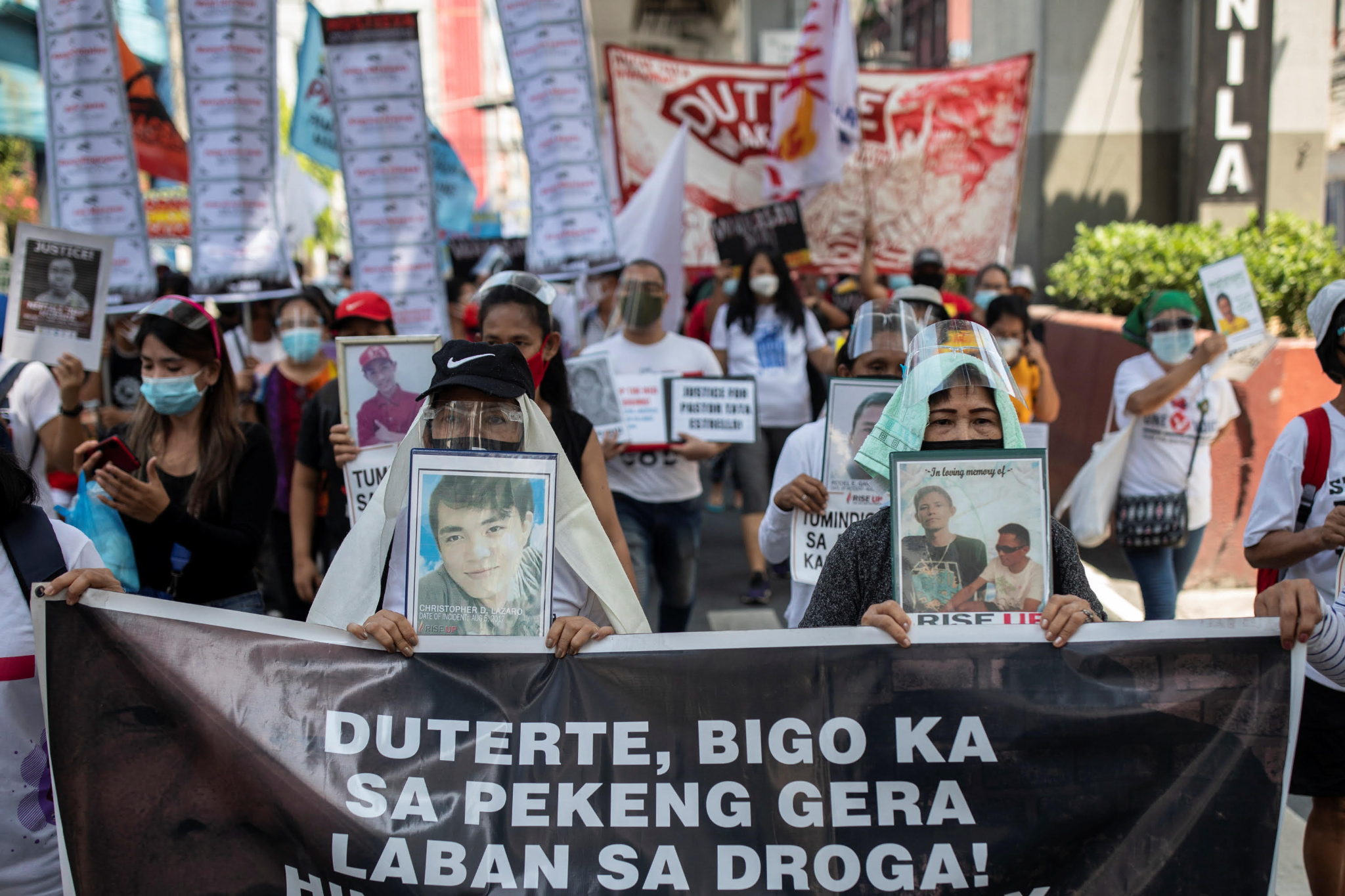 The word was uttered repeatedly by Philippine President Rodrigo Duterte throughout his term in relation to his anti-drug campaign, which continued to be relentless.

In the course of the bloody campaign, the death toll ranged from 6,000 based on official government figures and 30,000 based on claims made by human rights groups and critics of the violence that marked the campaign.

When Duterte steps down in 2022, critics of the bloodshed that characterized the anti-drug campaign were likely to see hope for an end to the killings as most aspirants seeking to become the next president all commented that while they would continue the anti-drug campaign, it would not be as bloody.

The University of the Philippines Third World Studies Center, however, said since 2016, the government’s drug war has killed two individuals each day.

The “Dahas (violence)” data by the Third World Studies Center revealed that the most killings occurred under the watch of PNP chief Ronald “Bato” Dela Rosa, now senator.

In 2020, the Social Weather Stations found that 76 percent of people believed “many” rights violations were committed in the government’s drug war with 33 percent saying “very many” while 42 percent saying “somewhat many”

Only 24 percent said there were few rights violations. 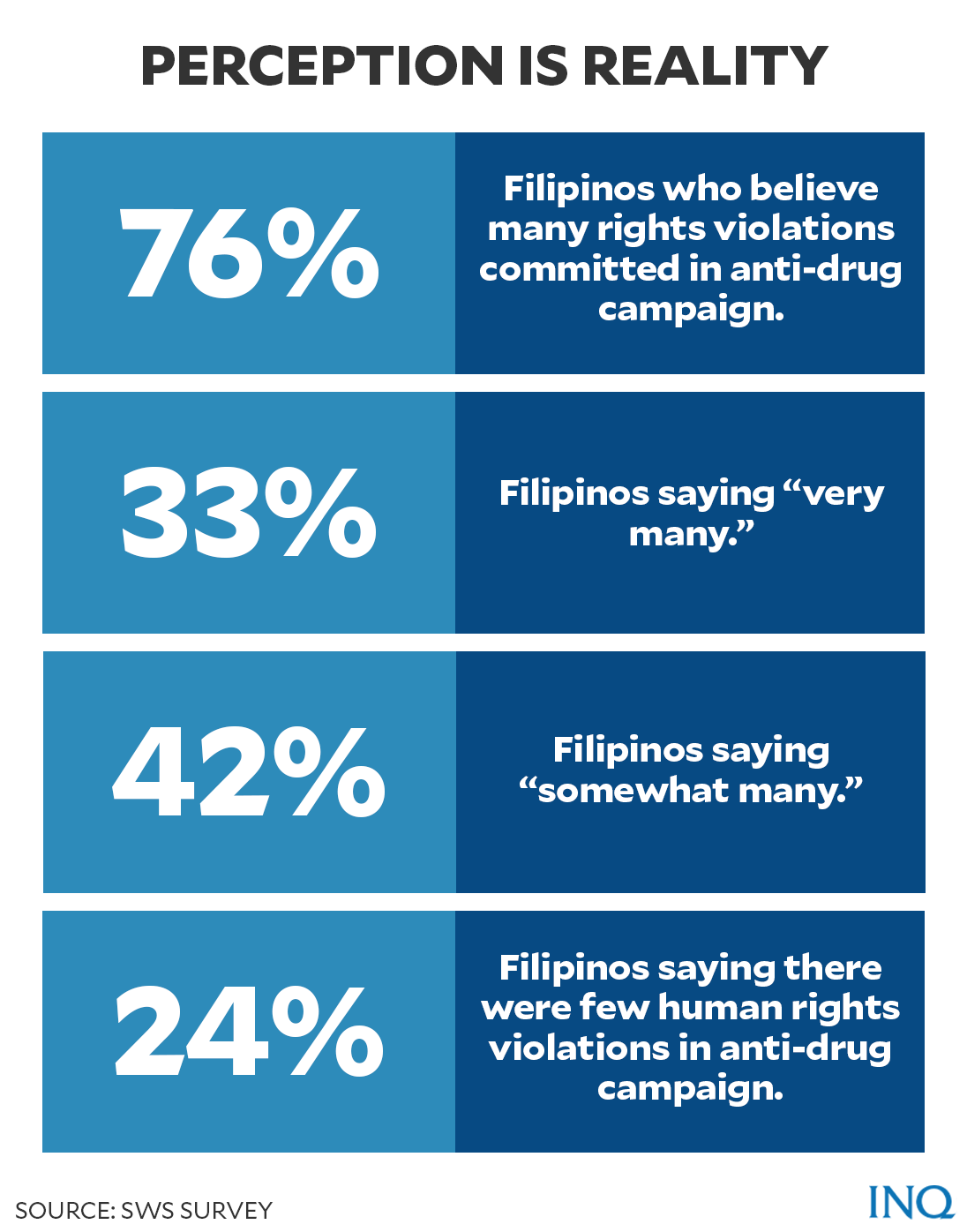 Last Sept. 15, the International Criminal Court (ICC) formally initiated an official investigation into crimes against humanity that were allegedly committed in the Philippines, especially in the government’s war on drugs.

It said there was “reasonable basis” to proceed with the investigation, explaining that “specific legal element of the crime against humanity of murder” appears to have been committed.

This, however, was opposed by the Duterte administration, saying that the ICC has no jurisdiction over the Philippines since the President already withdrew the country from the treaty that established the ICC––the Rome Statute.

The government also insisted that the justice system works in the Philippines. Last October, the Department of Justice (DOJ) released details of its review of 52 killings related to the war on drugs.

On Nov. 10, the Philippines asked the ICC to defer the investigation, saying that it was “investigating or has investigated with respect to the alleged crimes against humanity of murder under Article 7(1) of the Rome Statute.”

The ICC agreed to suspend the investigation, but demanded proof that there was no impunity in the Philippines. The Free Legal Assistance Group sent a letter asking ICC to continue its probe, saying the scope of the DOJ investigation covered only a small portion of the killings.

Where do they stand?

The President, on Nov. 6, said the war on drugs was meant to protect the Philippines from the “scourge” of illegal drugs. “I did it because I want to protect your children and their future,” he said.

Will the aspirants seeking to replace Duterte be able to perform better than him in the campaign against drugs which the Dangerous Drugs Board said had consumed at least 1.67 million people between the age of 10 to 69 or two out of every 100 Filipinos?

Here’s what they say:

De Guzman, who recently dared the President to investigate the cocaine use of an unidentified presidential aspirant, told Rappler on Oct. 26 that the Philippine authorities should also investigate the drug war.

If elected, De Guzman said he will cooperate with the ICC probe, saying that he wants the Philippines back as a signatory to the Rome Statute which established the ICC.

Go, Duterte’s most trusted confidant, on Oct. 6, reiterated that he backs the government’s war on drugs. However, he said he wanted to develop a “holistic approach” to help victims of drug addiction.

“In addition to the fight for the nation’s safety and security against the menace of illegal drugs, we must also direct attention towards the rehabilitation and recovery of its many victims,” he said.

Go stressed that “drug dependents should be treated as victims in need of medical, psychological, and spiritual help.” This, however, contradicted what he said in 2019.

“They said it’s a failure because innocent criminals should be protected. Do criminals who are innocent exist? That’s why they’re called criminals because they have the brain of a criminal. They don’t care,” he said.

Lacson said on Feb. 28 that the government’s war on drugs was a failure despite the thousands of Filipinos who were killed and the international embarrassment the war brought.

“Let us not pretend anymore, the drug war really failed because the drugs are still there. If it succeeded, then there should be a significant dent on the drug syndicates,” said Lacson, former head of the PNP.

In October, he said if he won the presidential race, Senate President Vicente Sotto III, who is seeking the vice presidency, will lead the fight against drugs under a Lacson administration.

He cited Sotto’s explanation that the government focused too much on law enforcement which was problematic. According to Lacson, under Sotto, law enforcement in the fight against drugs would be “just one of the components.”

“He wants to focus on prevention and rehabilitation, which were ignored. The approach must be holistic,” he said.

Marcos Jr., on Oct. 7, told CNN Philippines that he will continue Duterte’s war on drugs “in a different way”. He, however, did not directly say if he saw rights violations committed in the bloody anti-drug campaign.

“Yes, but perhaps in a different way. We have seen that the drug war has been conducted purely on [the] enforcement side. I think we should also focus on the prevention side,” he said.

While Marcos Jr. said he wanted to focus on prevention, he stressed that he will not help ICC investigators in strengthening the case against government officials.

“They want us to help them bring accusations against our Filipino workers in government? That’s too much, I don’t think that’s right,” said Marcos Jr. who initially wanted Duterte to be his vice president in the 2022 elections.

Moreno said on Nov. 26 that if he wins, he will continue Duterte’s drug war. However, he said he would focus on “drug lords and syndicates,” especially foreigners.

“We’ll go after those syndicates, drug lords, especially those who are bringing drugs from overseas. The long arm of the law and whatever existing laws, we’ll throw the book at them,” he said.

In October, Moreno said he will not resort to extrajudicial killings, saying that every individual has the right to life. “I believe that human rights are fundamental,” he said.

Moreno, however, said he would allow the ICC to investigate. “We will not hide anything. They can enter here. They can investigate. If someone is proven guilty, we will hold them accountable in the eyes of the law,” he said.

Pacquiao, in 2016, defended the government’s war on drugs,  saying that the President and police did not violate the law. He said “drug lords” were the ones responsible for the killings echoing a position made by Malacañang.

Last Nov. 23, however, he admitted that as a “naive” young man in the past, he had used meth because of his ignorance of the law. He now says drug offenders must have a chance to defend themselves in court.

“We have to put in jail those who are using drugs, selling drugs — that’s what the law says,” he said, saying that he will continue the war on drugs “in the right way”.

Robredo, who had a short stint as one of the heads of the Inter-Agency Committee on Anti-Illegal Drugs, said she will continue the war on drugs, but it will not be “kill, kill, kill”.

“In our case, we saw in the past five years that the drug war was conducted in such a way that is heavy on the enforcement—I do not believe in that strategy,” she said, explaining that despite the deaths, the problem did not diminish.

“In my belief, once the Dangerous Drugs Board sits as the chair, its plan will not be just ‘kill, kill, kill’ but the plan will be more comprehensive—heavy on prevention, heavy on rehabilitation,” she said.

Last Sept. 3, Robredo said the next president should let a potential ICC investigation take place in an “unhampered” way.