MANILA, Philippines — Pharmally Pharmaceutical Corp. executive Mohit Dargani on Friday identified to senators the “friend” who shouldered his and his sister’s chartered flight out of the country.

Dargani and his sister, Twinkle, are currently under the custody of the upper chamber after their arrest at Davao City Airport by the Senate security when they were about to flee to Malaysia last Nov. 14.

The flight cost around $37,000 or approximately P1.85 million, according to a document earlier shown by Senator Risa Hontiveros.

At first, Dargani refused to identify the friend who shouldered their chartered flight to Malaysia to protect his privacy.

But Hontiveros, who quizzed Dargani on the financier of the flight on Friday, repeatedly said his refusal to name the friend could be considered as an “obstruction of justice.”

The Pharmally executive then agreed to write their friend’s name on a piece of paper, which was read by blue ribbon committee director-general Rudy Quimbo, who identified the Dargani siblings’ “friend” as a certain Gary Wong. 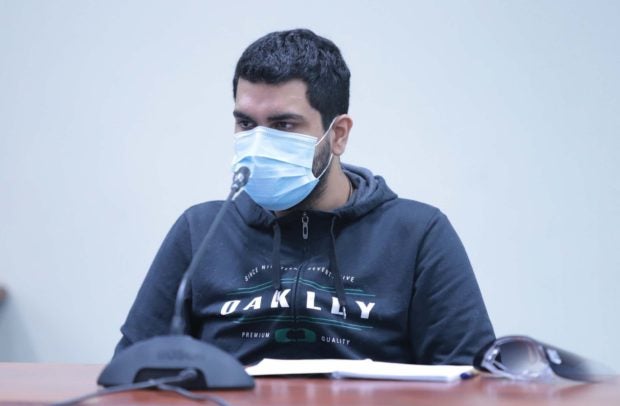 Pharmally Pharmaceutical Corp. executive Mohit Dargani attends the continuation of the online inquiry of the Senate Blue Ribbon Committee into the 2020 Commission on Audit (COA) report and other issues related to budget utilization of the Department of Health (DOH), especially its expenditures related to the fight against COVID-19 Friday, November 26, 2021. (Albert Calvelo/Senate PRIB)

According to Dargani, Wong is a Singapore-based entrepreneur.

He said he met Wong at a restaurant or a bar in Singapore.

Dargani added that Wong was not aware that an arrest order had been issued against him and Twinkle but knew that the Senate security eventually intercepted them.

“I will still have to pay for it (flight expenses), but I think he would be kind enough to wait until I get out of here,” Dargani noted.

Mohit serves as the corporate secretary and treasurer of Pharmally, while his sister serves as its president.

Over P8.6 billion of this went to the contracts awarded to Pharmally in 2020.