MANILA, Philippines — Pharmally Pharmaceutical Corp. executive Mohit Dargani turned emotional on Friday during questioning about their foiled flight out of the country, denying that he and his sister were trying to “escape or hide” from an ongoing Senate investigation.

“We did not do this to escape or to hide from the investigation….I was just exerting our rights. And the documents that were asked from me and my sister. We have provided. All the subpoena duces tecum that was addressed to me and Twinkle, we have provided. We have complied,” Dargani said during Friday’s Senate blue ribbon committee hearing into the government’s pandemic-related purchases.

“We were traveling from one place to another place. I just have to do this because I was doing this as a son, for my mother and for my sister who’s fighting mental health [problems],” he added.

During his testimony to the senators, he said he came back to the Philippines to be with his mother and sister, but he hasn’t felt safe together recently.

“We’re not hiding. They did not want me to come back [to the Philippines] but I came back because they’re my home. They’re my safe place. I needed my safe place,” Dargani said.

“But right now, when we are together, even though we were together, we couldn’t be safe. We were not safe with each other,” he added, turning emotional.

“We’re going from one place to another place,” he added. 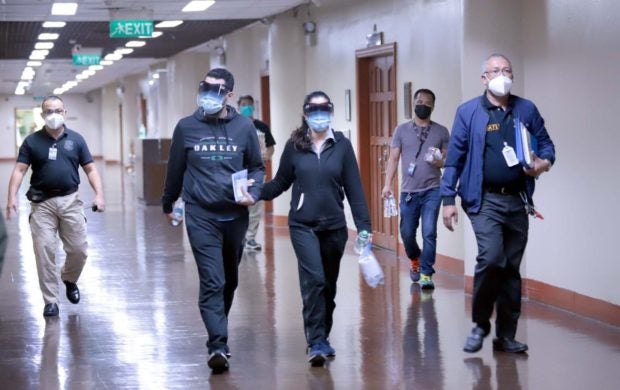 FOILED: Daragani siblings nabbed as they are about to fly out of the country. (Albert Calvelo/Senate PRIB)

According to Dargani, his sister’s mental health has also been “deteriorating.”

But Sen. Risa Hontiveros, who was questioning Dargani, said the siblings’ flight to Malaysia appeared to be an attempt to get away.

“Nagmukha po talaga sa main (It looked that way) until the Senate OSAA (Office of the Sergeant-at-Arms) were able to prevent your taking that flight na tumatakas nga kayo sa amin (you are running away from us),” she said, adding that Dargani, after being intercepted by the Senate OSAA, had even tried to flee.

Meanwhile, Hontiveros expressed empathy for Twinkle’s mental health concerns but noted that the blue ribbon committee only wants “accurate and complete answers to our questions.”

The Dargani siblings are currently under the custody of the Senate after their arrest at Davao City Airport last Nov. 14 when they were about to flee to Malaysia.

Both were arrested for contempt of the Senate after refusing to submit documents previously subpoenaed by the blue ribbon committee.