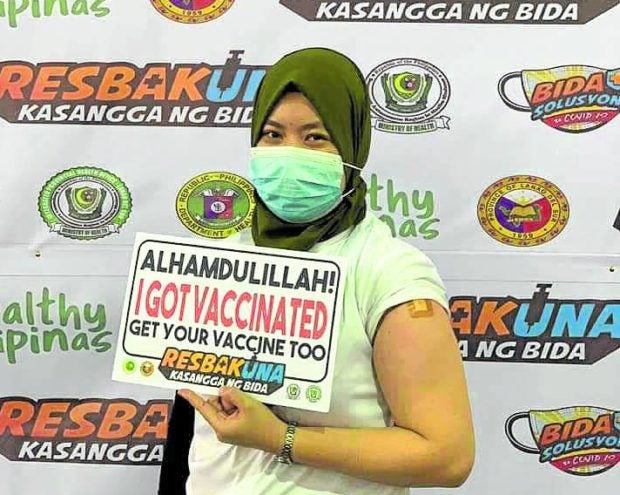 LEADING THE WAY Lanao del Sur’s health workers get vaccinated against COVID-19 to ensure that they are protected while they keep the province’s hospitals and other medical facilities running amid the pandemic. —PHOTO COURTESY OF INTEGRATED PROVINCIAL HEALTH OFFICE OF LANAO DEL SUR

MARAWI CITY — Asisah, 60, a resident of Marantao town, Lanao del Sur, declined taking COVID-19 vaccine shots in deference to the admonition of elders in the family.

Asisah had not experienced being immunized against contagious diseases in the past, hence, saw no need for being inoculated against COVID-19.

“Despite that, we have not suffered any serious illness until now,” she told the Inquirer.

Vaccine refusal and hesitancy will be a major roadblock to achieving herd immunity against COVID-19 in Lanao del Sur, and even throughout the Bangsamoro Autonomous Region in Muslim Mindanao (BARMM), the region with the lowest vaccination rate in the country, health officials said.

Data from the National Task Force Against COVID-19 showed that as of Nov. 14, BARMM reported 324,246 fully vaccinated individuals, equivalent to 7.59 percent of its estimated 4.27 million population or 10.85 percent of the region’s 2.9 million target.

Other regions with less than 20 percent of its population fully vaccinated were Mimaropa (17.72 percent), Soccsksargen (16.65 percent), Bicol (16.85 percent) and Zamboanga Peninsula (18.15 percent).

During the national vaccination drive, “Bayanihan, Bakunahan” from Nov. 29 to Dec. 1, BARMM officials are aiming to inoculate 985,947 people, of which 300,000 will be from Lanao del Sur.

In eight months of the government’s vaccination rollout, health authorities in Lanao del Sur’s 39 towns were only able to fully inoculate 60,250 people, or just 9 percent of the province’s target.

In the provincial capital of Marawi City, which is densely populated, fully vaccinated individuals accounted for only 13,000 or just 10 percent of the 133,512 target.

Enhanced accessDr. Alinader Minalang, chief of the Integrated Provincial Health Office, said many Maranaos continued to harbor fears about vaccines, mostly due to lack of information or wrong information they get from social media or those passed on to them by other people.

Adiong reminded the local Muslim population that “the vaccines are halal (permissible),” echoing what religious authorities in the BARMM have been repeatedly saying since the start of the government’s vaccination drive.

Minalang said they would set up at least 300 vaccination sites in 39 towns, using schools and big establishments. These will be on top of inoculation operations at the government-run Amai Pakpak Medical Center in Marawi City and the district hospitals.

“We are hoping to achieve the target given to us by the national government which is 100,000 jabs per day,” Minalang said.

Vaccination sites will also be set up in checkpoints manned by the military and police to cater to travelers.

Those who signified consent to receive vaccine shots can choose to be served by the mobile vaccination teams, or go to either the City Hall or the Mindanao State University infirmary.

Apart from hesitancy, Dalidig said they were also fighting complacency among locals as active cases in Lanao del Sur had dropped to only 12 as of Tuesday and no new cases were recorded in the past two days. He said the decrease in infections was due to the localized lockdowns.

Minalang said they were hoping to increase the vaccination coverage in the province to 50 percent by the end of the year and achieve herd immunity by the first quarter of 2022.

Aside from hesitancy and refusal, BARMM’s vaccination drive is also weighed down by lack of health personnel. For the three-day vaccination drive, Health Minister Bashary Latiph said the region needed additional 2,900 vaccinators.

International development agencies, such as Plan International, UN Children’s Fund and the British government, are helping the regional government in information campaigns to overturn vaccine hesitancy among the region’s people.

To further encourage vaccination, the Ministry of Social Services and Development has prepared a package of goods for indigents, seniors and persons with disability who take COVID-19 shots during the national vaccination drive.