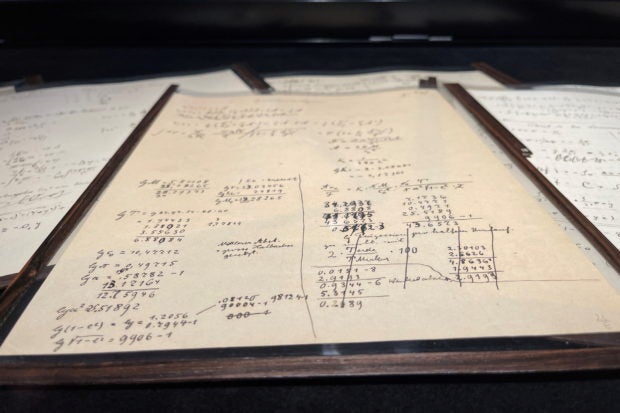 A page of the Einstein-Besso manuscript, a 54-page working manuscript written jointly by Albert Einstein and Michele Besso between June 1913 and early 1914, which documents a crucial stage in the development of the general theory of relativity, is displayed at Christie’s auction house in Paris, France, November 22, 2021. REUTERS FILE PHOTO

PARIS — A manuscript co-authored by Albert Einstein, offering a rare insight into the legendary physicist’s thinking leading up to his general theory of relativity, was sold in an auction on Tuesday for 11.7 million euros ($13.17 million).

Auction house Christie’s had estimated the value of the manuscript at between 2 million and 3 million euros.

The 54 pages of paper, around half filled with Einstein’s handwriting, are one of only two working documents known in which the thinker approaches his famous theory that laid the groundwork for modern cosmology and technology such as GPS navigation.

They had been kept in the custody of the Swiss physicist Michele Besso, a close friend and academic partner of Einstein’s, who co-authored the work between 1913 and 1914.

“That’s also what makes it particularly important given that working documents by Einstein before 1919 are extremely rare,” said Vincent Belloy, an expert at Christie’s who hosted the auction in Paris.

“Einstein is someone who kept very few notes, so the mere fact that the manuscript survived and made its way to us already makes it absolutely extraordinary,” he added.

Made up mainly of endless calculations in black ink on wrinkled, lightly yellowed paper, the manuscript challenges Einstein’s popular image as an absolute genius, because it shows that even he – at least sometimes – made mistakes.

“Einstein makes errors in this manuscript, and that I think makes it even greater in a way, because we see the persistence, the thought that was in the process of being built, that is being corrected and redirected,” Belloy said.

In May, a handwritten letter in which Einstein mentioned his famous E=mc² equation, a part of his earlier theory of special relativity, was sold at roughly one million euros in the United States, more than three times its estimated price.

With his general theory of relativity that was published in 1915, Einstein revolutionised modern physics when he first described gravitation as a geometric warping of space and time, a finding that remains valid.

Christie’s did not reveal the name of the buyer.