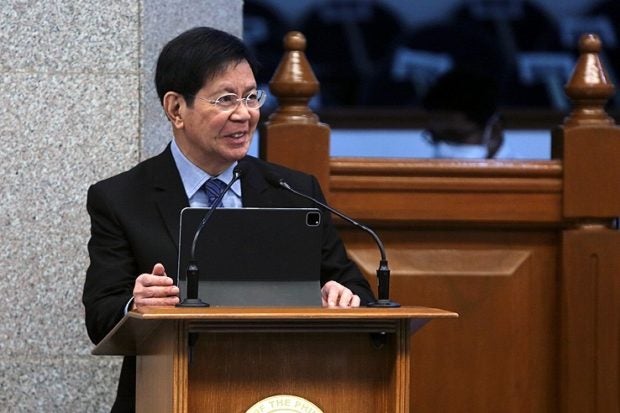 WHY ARE THERE SO MANY DSWD PROGRAMS? Sen. Panfilo Lacson sounds the alarm bell over the possible overlapping claims for beneficiaries under the different programs of the Department of Social Welfare and Development (DSWD). During Tuesday’s hybrid plenary session November 23, 2021 deliberating on the agency’s proposed 2022 budget, Lacson asked whether the DSWD could streamline its programs so that the government will be able to save money from overhead costs. (Bibo Nueva España/Senate PRIB)

During the plenary deliberations on the proposed 2022 budget of the DSWD, Lacson said he received a letter from the former president of Social Welfare Employees Association of the Philippines regarding the alleged irregularities within the DSWD’s office in Region 11.

“According to him, DSWD Region 11 staff were complaining because they did not receive their travel allowance, TEV (travel expense voucher), in their Land Bank accounts,” Lacson said.

Lacson, citing the letter, noted that a total of around P1 million intended for the payment of TEV “was unlawfully deposited to the account” of the office’s administrative assistant assigned in the preparation of the payroll.

Instead, the said administrative assistant was just allowed to finish the employment contract until Dec. 2020 without renewal, noted Lacson.

The former president of the employees’ union, according to Lacson, said the incident has already been communicated to the regional office “but no action has been taken as of date.”

“Worse, [the] Pantawid Program division chief ordered to keep the incident a secret,” he added, citing the letter.

“This complaint has also been elevated to Sec. (Rolando) Bautista but no investigation has been conducted until now, may we hear from the DSWD?” Lacson asked.

Senator Imee Marcos, who defended the budget of the DSWD, said she was told by Bautista that “action has been taken” and that an investigation is being undertaken by a fact-finding committee.

A separate investigation with the Land Bank has already started, she added.

But with the incident happening already one year ago, Lacson asked the DSWD about the progress of the investigation.

“This happened last year…We should expect that some progress of the investigation has already been accomplished,” he said.

In response, Marcos, citing answers given to her by the DSWD, said the Land Bank would need to “secure the payrolls for travel allowance as it appears impossible that only one account could’ve been declared in the payroll.”

“So it looks like there should be even more of this or further record-taking has to be made to verify these claims,” she said.

Further, Marcos said she was informed that the field office has completed its investigation but that the findings were “inconclusive.”

“There was no sufficient evidence of the said P1-million transfer so they are now enjoining the Land Bank to undertake the investigation but the Land Bank finds that they have insufficient records with regard to all the travel allowance payrolls,” she told her colleagues.

“Hindi daw nila mabuo sa ngayon yung total amount na talaga ipinadala because it is impossible that only one account should have been declared in the payroll kasi yung travel allowance, hiwa-hiwalay yun ay sa iba-ibang tao,” she said.

“There’s a level of confusion pa ho, but I do understand it’s been a year, we should get on it,” she added.

Lacson said he will await the result of the current investigation being conducted on the matter.