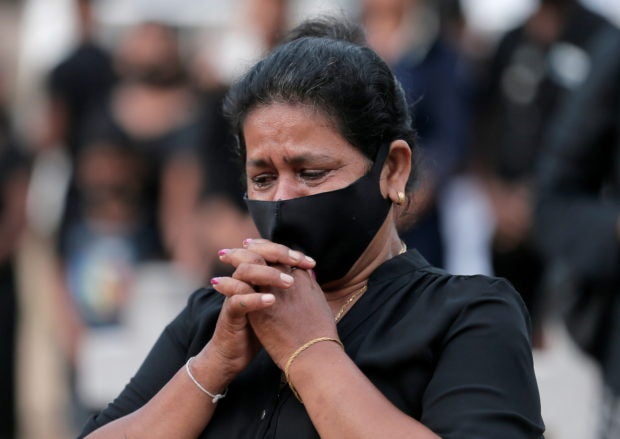 A family member of a victim of the 2019 Easter Sunday bomb attacks reacts near a mass graveyard next to St. Sebastian’s Church, one of the churches that was attacked, during the second anniversary in Katuwapitiya, Sri Lanka, April 21, 2021. REUTERS FILE PHOTO

COLOMBO — A Sri Lankan court on Monday began the first of three trials connected to bombings that killed nearly 270 people on the island in 2019, amidst appeals for greater accountability from victim support groups.

In this trial, former national police chief Pujith Jayasundara is charged with failing to act on repeated intelligence warnings of a possible terror attack.

A total of 855 charges of murder and attempted murder were read out as Jayasundara stood in the dock at the back of the courtroom. A total of 1,215 witnesses have been listed to give evidence but not all may be called, his lawyer said.

“Our position is the former police chief is not guilty. He did not intentionally aid or abet the attacks and there was no omission on his part that caused the attacks,” attorney Roshan Dehiwala told Reuters.

Ex-Defense Secretary Hemasiri Fernando, the top official in the defence ministry at the time, faces similar charges in a trial beginning later on Monday. Neither he nor his lawyer could be reached for comment.

Both men are out on bail.

The trial of 24 men accused of carrying out the attacks begins on Tuesday.

Police filed over 23,000 charges against those suspects, including conspiring to murder, aiding and abetting the attacks, and collecting arms and ammunition. The group also includes Mohammad Naufer, who officials say masterminded the attacks and is linked to Islamic State.

On Sunday, dozens of Catholic community members held protests and laid flowers at multiple events organized to remember those lost in the attacks.

Participants appealed to the government to support survivors and ensure the trials are allowed to proceed without political interference.

“We want genuine justice from this process. That is what we are appealing for the officials to deliver. We have been waiting a long time and we want the real people responsible held accountable for what happened,” said Eranga Gunasekera, a member of a victims support group, during a remembrance ceremony held in Colombo.