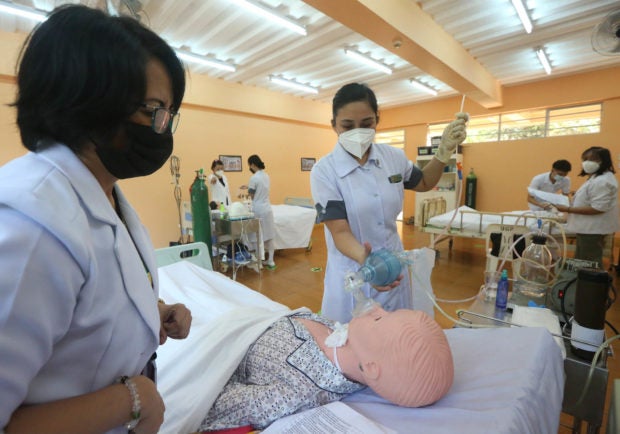 HANDS-ON TRAINING: Clinical instructors assist graduating nursing students during a dry run of in-person classes at Universidad de Manila on Monday. The university has been allowed to conduct physical sessions for a limited number of students and teachers per classroom as Metro Manila eases its COVID-19 restrictions. (Photo by MARIANNE BERMUDEZ / Philippine Daily Inquirer)

MANILA, Philippines — Excited students returned to classrooms in selected areas in the central and northern parts of Luzon on Monday as part of the pilot implementation of in-person classes in 20 private schools nationwide.

A triage area was set up near the gate of Academica de Meridien at Barangay San Gregorio in San Antonio, Zambales province, for 12 of its 23 students ranging from kindergarten to Grade 3.

They underwent sanitation procedures and temperature screening before being allowed into their respective classrooms where they were seated 1 meter apart. They were also required to wear face masks while in class. Their parents were prohibited from entering the school premises.

“The children were excited to see each other and talk in person,” Jocelyn Andaya told the Inquirer when she inspected the school’s reopening.

Andaya, the director of the Department of Education’s (DepEd) Bureau of Curriculum Development, said she witnessed the readiness of the schools she visited and their collaboration with their respective local governments for the resumption of classes.

In Pampanga province, 20 of 28 senior high school students at Mother of Good Counsel Seminary in the capital city of San Fernando attended the in-person classes.

Mayor Edwin Santiago, who was at the school reopening, said the classrooms were well-ventilated to ensure the safety of students. Only six or seven students seated a meter apart were allowed per classroom with a transparent plastic barrier separating them from their teacher.

The Singapore School Clark inside the Clark Freeport, also in Pampanga, was among those included in the list of private schools allowed to hold in-person classes. However, it decided to postpone its reopening to January.

“The first day of the implementation of [in-person] classes coincided with the first day of the term break of our school calendar so we had to reschedule it [to] Jan. 10 next year,” school head Pamela Tolentino said in a phone interview.

She said they wanted their students to have uninterrupted classes, adding that 18 students from kindergarten to Grade 3 would participate in the pilot run next year.

“It’s successful and we believe this is a better arrangement because the teachers need not travel to the different houses of students for remedial lessons, especially those who cannot easily understand the modules,” she said.

In Ilocos Norte province, Saviour’s Foundation Inc. in the capital city of Laoag did not take part in the pilot run despite a go signal from the DepEd.

Like the 100 public schools that kicked off the pilot run of face-to-face classes last week, the private schools went through an evaluation process. Aside from being in areas with a low risk of COVID-19, they also underwent a safety assessment and validation, and secured permission from their respective local governments and the parents of students.

These requirements were part of the guidelines under the joint memorandum circular of DepEd and the Department of Health.

This year, 3.21 million students enrolled in private schools compared to 3.3 million in 2020.

The Alliance of Concerned Teachers (ACT), meanwhile, relaunched a help desk for teachers and other school personnel to address questions and report other concerns about preparations for and the resumption of in-person classes nationwide.

The group’s COVID-19 Hotline Assistance for Teachers in Private Schools-Bantay Ligtas na Balik-Paaralan Project can be contacted through its Facebook page (facebook.com/ACTPSCHATProject) or by calling 0917-6395942.

Jonathan Geronimo, the secretary general of ACT Private Schools, said that while they welcome recent developments in the education sector, the government should also continue to prioritize ensuring the safety of both students and school personnel.