Vaccination a must for on-site workers starting Dec. 1 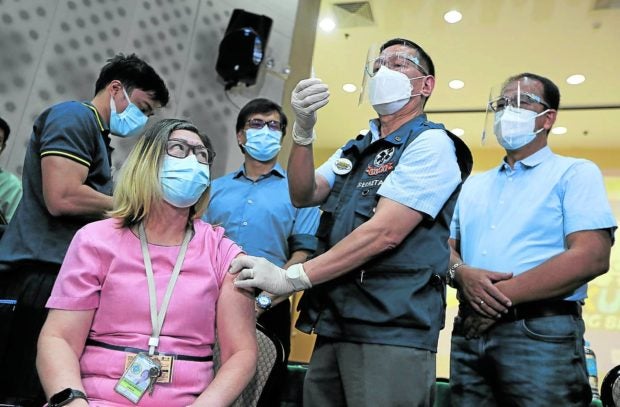 MANILA, Philippines — Starting Dec. 1, the “no work, no pay” rule may be applied to unvaccinated employees who are required to work on-site but refuse to undergo mandatory regular testing for COVID-19, according to a labor official.

The Inter-Agency Task Force for the Management of Emerging Infectious Diseases (IATF), through Resolutions No. 148 and No. 149 dated Nov. 12 and Nov. 18, respectively, has ordered all establishments and employers to require their employees who must report in person to be vaccinated.

By Dec. 1, the IATF said, all unvaccinated workers must undergo RT-PCR (reverse transcription-polymerase chain reaction) testing at their own expense regularly or at least once every two weeks, to be able to work on-site. A rapid antigen test may be used when RT-PCR capacity is “insufficient or not immediately available.”

“Those who do not want to be vaccinated but have to report on-site can report, but they have to be tested at their own expense,” Labor Assistant Secretary Teresita Cucueco said in an online briefing on Monday.

According to her, the Department of Labor and Employment (Dole) will no longer issue a labor advisory on the IATF policy.

Cucueco said the “no work, no pay” rule may be applied to on-site workers who refuse to be vaccinated and do not present a negative RT-PCR test.

“The worker may work from home if there is a work-from-home arrangement. But if there’s none and the worker is really needed on-site, the worker can work but should undergo testing. Now if they still refuse that, any remaining leaves may apply. If there are no more leaves, they would have to go to ‘no work, no pay,’” she added.

But she admitted there were still no penalties prescribed against employers and employees who fail to comply with the IATF policy.

“There is no penalty included in the resolution. So we will just take it from there [if] we see any violation … , any problem that may arise,” Cucueco said.

Cucueco, the concurrent director for the Dole’s Bureau of Working Conditions, acknowledged that under Republic Act No. 11525, or the COVID-19 vaccination program law passed last February, vaccination cards were not mandatory for employment.

“The law says it’s not mandatory. That’s why we are saying you do have an option. If you don’t like [to be vaccinated], you can be tested regularly at your own expense,” she said.

She reported that a case had been brought before the Dole regional office for Metro Manila by a group of workers who complained of discrimination from their employer because they were unvaccinated.

“The Dole regional office made an inspection. We are looking into this,” she said.

But she pointed out that the complaint was filed before the IATF laid down the policy, adding: “We have the [IATF] resolution now that will give direction. [The investigation] is continuing.”

Meanwhile, President Duterte has ordered all government agencies to support the “Bayanihan Bakunahan” nationwide vaccination campaign that aims to inoculate 15 million Filipinos against COVID-19 from Nov. 29 to Dec. 1.

The Department of the Interior and Local Government (DILG), which is spearheading the three-day drive with the Department of Health (DOH), will tap members of the Sangguniang Kabataan nationwide to serve primarily as data encoders.

The DILG has also tapped medical teams from the Philippine National Police, Bureau of Jail Management and Penology and Bureau of Fire Protection to serve as vaccinators.

Cabinet Secretary Karlo Nograles, acting presidential spokesperson, urged “our unvaccinated countrymen to participate in the ‘Bayanihan Bakunahan’ project so that they can provide themselves and their families with the protection and peace of mind that vaccines provide its recipients.”

According to him, more than 32.9 million Filipinos have been fully vaccinated against COVID-19.

As the government started administering booster shots and additional vaccine doses, a health official reminded inoculation centers to assign separate lanes for those getting either their primary or booster jabs to avoid confusion.

“There must still be special lanes for those who are not yet fully vaccinated,” Health Undersecretary Maria Rosario Vergeire said.

“It is still more important for people to get their primary series of vaccines,” she added.

The DOH said that all 8.25 million senior citizens who were fully vaccinated against COVID-19 would be eligible for booster shots.

On the other hand, additional doses shall initially be offered to immunocompromised individuals that are among 9.02 million people with comorbidities.

Booster shots are for individuals who have received the full dose of the vaccine but experience a decline in their immune response to COVID-19 after several months. An additional dose, meanwhile, is an extension of the primary vaccination series to improve the response of the immunocompromised.

—WITH REPORTS FROM JEANNETTE I. ANDRADE AND JEROME ANING