Robredo to small businesses: Be frugal, spend only if it will yield returns | Inquirer News
Close
menu
search

Robredo to small businesses: Be frugal, spend only if it will yield returns 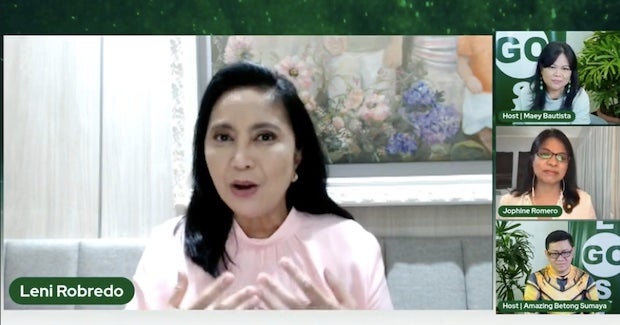 MANILA, Philippines — Small-business owners should try to stay frugal and spend only if it would yield a return, Vice President Leni Robredo said on Monday at “Kandidatalk,” a forum organized by Go Negosyo to tackle issues affecting micro, small, and medium enterprises (MSMEs).

Robredo – who holds an economics degree from the University of the Philippines — was asked to give advice to two business owners on how they would spend the P25,000 given to them for participating in the forum, which was conducted through video conferencing.

“For me, it’s always the financial [aspect]. Isn’t the advice always to not spend more than what you need? Sometimes, we [her office] also have sustainable livelihood and training programs. The failure of a business happens if we don’t know how to manage,” she said, speaking in Filipino.

“So the very first thing that we should manage is that we should know how to be strictly frugal at the start. We should spend only on things that would yield returns. If there’s no return, it’s not the time. Let’s skip that for now. We can spend on luxuries when we already have extra money,” she added.

One of the MSME owners asked Robredo what advice she could give for businesses that had been struggling during the pandemic.

“Just hold on. But keep fighting and keep looking for solutions. Nothing is too small for us. What I’m saying is, if we really want to progress, we must be willing to do all sorts of things, as long as they’re good,” she said.

“‘Some are a bit choosy: ‘I don’t want to that. This is the only thing I want to do.’ If we’re like that, the opportunities are fewer, I think. But if we are the type of person who keeps fighting, the doors and windows of opportunity will really open up for us,” she added.

But Robredo also stressed that the government should still help MSMEs, which she considers the backbone of the country’s economy. She pointed out that, of the over 950,000 business enterprises in the country, 99.5 percent are MSMEs, and 88.7 percent are micro-enterprises.

“You’re lucky that you were able to ask your questions to VP Leni,” Concepcion told the forum participants.

“In fact, I’m quite impressed. You’re like a super mentor, in fact,” he went on, this time addressing Robredo. “So I’m impressed. You know the approach. And I think, these small business people will really find it hard because they lack capital. They lack mentors who can guide them competently. And that’s important,” he added.

“Kandidatalks” is a series of discussions that Go Negosyo will hold with presidential candidates in the 2022 national elections. Robredo was the second of the eight aspirants they had invited.

The first resource person at the forum that was held last Nov. 19 was former presidential spokesperson Ernesto Abella.

The following presidential aspirants have confirmed their attendance in the forum:

The 2022 presidential race is turning out to be a tight contest, with several big names vying for the seat.

Despite this, Robredo has remained optimistic about her chances, after a recent survey showed the second to Marcos as the preferred candidate. It was a pleasant surprise, according to her, as she was not expecting her numbers to improve until around January or February 2022.