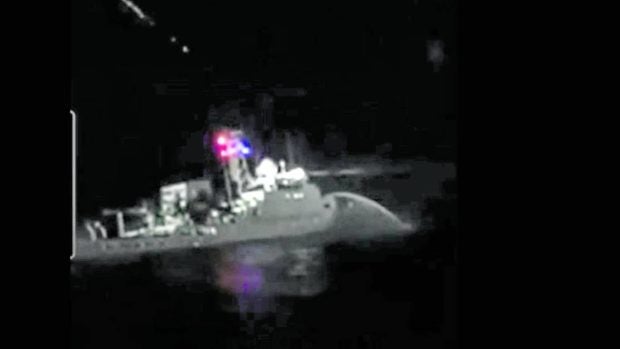 NIGHT ATTACK: A blurry image from a cell phone camera of one of the crew members of a Filipino boat shows the Chinese Coast Guard ship that blasted them with a water cannon on Tuesday, Nov. 16, 2021, to prevent them from bringing supplies to troops on the rusted BRP Sierra Madre, which serves as a Philippine Navy outpost at Ayungin (Second Thomas) Shoal west of Palawan province. No one was injured in the attack. (VIDEO GRAB / INQUIRER FILE PHOTO)

MANILA, Philippines — President Rodrigo Duterte himself is to blame for the Ayungin Shoal incident during which a Chinese Coast Guard ship stopped and water-cannoned Philippine supply vessels, Bayan Muna Rep. Carlos Zarate said in a statement issued on Monday.

Duterte did condemn the incident last Tuesday, but he himself was instrumental in allowing such actions from China, Zarate said.

“The buck also stops with Malacañang,” the lawmaker said. “China’s aggressiveness in the WPS [West Philippine Sea] and inside our own territory is also largely a product of the so-called ‘soft landing’ and ‘pivot to China’ foreign policies of the Duterte administration since 2016.”

“China has become even more emboldened with its imperialist actions in the WPS because of the vassal-like attitude of the Duterte administration,” he added.

Last Thursday, Foreign Affairs Secretary Teodoro Locsin Jr. confirmed that Chinese Coast Guard vessels blocked and water-cannoned the boats that were in a resupply mission to BRP Sierra Madre, a ship deliberately grounded at the Ayungin Shoal to serve as a Philippine Navy outpost.

The incident, which occurred last Nov. 16, did not cause any injuries but forced the boats to abort their mission.

According to the 2016 ruling of the Permanent Court of Arbitration (PCA), China’s nine-dash line territorial claim does not have any legal or historical basis and the Philippines enjoys rights to its EEZ.

China has maintained that it would not acknowledge the ruling.

Earlier, Duterte released a statement saying that the Ayungin incident did not speak well of the relations between China and the Philippines, stressing that parties with a stake at the West Philippine Sea must ensure that the disputed region would be a “sea of peace and stability”.

Duterte has been long criticized for allegedly starting the pivot to China, under what he called his administration’s independent foreign policy.  He chose to mend ties with the Asian superpower after relations became strained due to the complaints filed by the previous administration of President Benigno Aquino III.

Now, Zarate believes that Duterte’s statements must not be taken as mere words.

“President Duterte’s statement now should be coupled with a clear policy statement stopping his skewed appeasement policy that only resulted to China’s aggressive, even unchecked expansionism,” Zarate said.

“Otherwise, it can be interpreted as just a political stunt since elections are fast approaching and he again wants to court the Filipino peoples’ votes for him and his candidates. It might become like his jetski joke in 2016,” he added, partly in Filipino.

Zarate thinks that Duterte should also assert the 2016 PCA ruling, and conduct joint patrols with other nations — without resorting to armed conflict.

“There are so many ways to stand up for our country without going to war. We should use these options now rather than surrender our right to our EEZ and the lives and livelihood of our people,” he noted.

The reef is just 175 nautical miles west of Bataraza, Palawan — which is also inside the country’s EEZ.

Read Next
Robredo to small businesses: Be frugal, spend only if it will yield returns
EDITORS' PICK
PH to import 60,000 tons of fish to cover shortage
Gear up and get ready to play with Yamaha Mio Gear
Over 3 Million worth of prizes to be won at Smart Padala’s SENDali Manalo Promo!
Acer starts the year off strong with the Aspire Vero National Geographic Edition
#VotePH2022: COVID, power woes loom as poll concerns
Workers are exempted from ‘no vax, no ride’ policy – DOLE chief
MOST READ
Guevarra to Acosta: Obey rules on unvaccinated
PH to import 60,000 tons of fish to cover shortage
Emma Stone calls Andrew Garfield a ‘jerk’ after he ‘lied’ about his ‘Spider-Man: No Way Home’ appearance
Cold-case investigation names surprise suspect in Anne Frank’s betrayal
Don't miss out on the latest news and information.