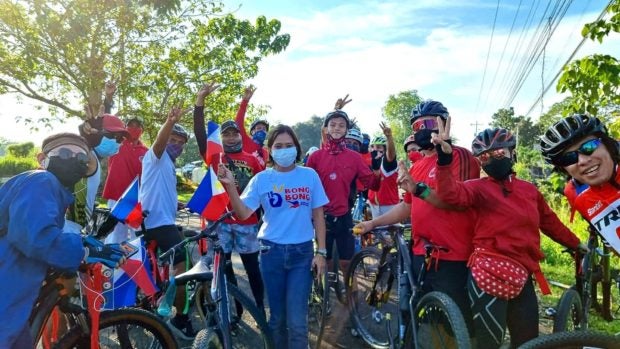 The caravan participants, shouting “BBM, BBM,” were onboard vehicles plastered with tarpaulins of Marcos’ photos and decorated with red and green ribbons.

Organizers said around 3,000 to 5,000 vehicles participated in the caravan from Talisay City in the north and Bago City in the south.

The police did not give any estimate as to the number of vehicles that participated.

The caravan was staged to express support to Marcos, and his running mate Davao City Mayor Sara Duterte as shown in their red and green ribbons.

Aurora Blanca, Silent Majority BBM 2022 chairman, said they believed in the advocacy of Marcos and will not be distracted or swayed in their belief that he is the right president for the country despite negative statements being hurled against him.

“We see the positive side of Marcos and believe he can bring change and improve the economy,” she said.

The “unity caravan” was composed of different groups supporting Marcos in Negros, many of whom got to know each other through social media.

Blanca said they drew participants to join the caravan through social media because they wanted to show the rest of the country that Marcos has supporters in Negros.

She said her group is called Silent Majority BBM 2022 because many of the participants work in government and cannot publicly come out.

Read Next
100,000 supporters join Ilocos Norte ‘unity ride’ for Bongbong Marcos
EDITORS' PICK
Acer starts the year off strong with the Aspire Vero National Geographic Edition
Comelec division junks petition to cancel Marcos COC for president
PH logs 37,070 more COVID-19 cases; over 33K others recover
The best of bayside and city living at SMDC’s Sail Residences
‘Not yet the end’: Lawyer says Marcos Jr’s DQ cases to take lengthy process
Over 3 Million worth of prizes to be won at Smart Padala’s SENDali Manalo Promo!
MOST READ
NBI foils escape attempt of Kerwin Espinosa, two others
Marcos camp ‘extends hand of unity’ after COC cancellation bid is thrown out
Wendell Ramos finally gets to hold his newborn for the 1st time
No vaccine, no French Open for Djokovic, says French Sports ministry
Don't miss out on the latest news and information.