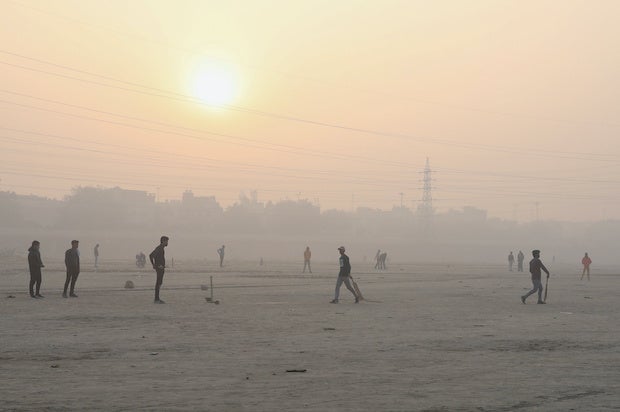 People play cricket on the floodplains of the Yamuna river on a smoggy morning in New Delhi, India, Nov. 17, 2021. (REUTERS)

NEW DELHI — More children are in hospital with breathing problems as pollution levels remain dangerously high in New Delhi, doctors warned on Wednesday, and the government shut five power stations and extended school closures to try to contain the crisis.

The city of 20 million was the world’s most polluted capital for the third straight year in 2020, according to IQAir, a Swiss group, and air quality has hit hazardous levels there and in other parts of northern India this month.

On some cloudless mornings, the sun struggles to break through the smog, and landmarks just a few hundred meters away are barely visible.

Hospitals are seeing a sharp increase in the number of children with respiratory complaints, raising concern among parents and doctors about their health in the short and long term.

Numbers have jumped threefold in the past seven to 10 days, according to Arvind Bountra, head of pediatrics at Max Super Speciality Hospital.

“This is directly linked to high levels of pollution that the city of Delhi and NCR are witnessing…” Bountra said, referring to the National Capital Region that includes Delhi’s satellite cities.

Extended exposure to pollutants, including lead, could lead to more severe complications.

“There is some study that shows that the cognitive functions of the brain (among kids) are also affected by these very small particles,” Bountra added.

On most days, the Air Quality Index (AQI) has stayed above 451 on a scale of 500, indicating “very poor” and “severe” conditions that affect even healthy people and seriously impact those with existing diseases, according to the federal pollution control board’s guidance.

The AQI measures the concentration of poisonous particulate matter PM2.5 in a cubic meter of air. The government prescribes a “safe” PM2.5 reading at 60 micrograms per cubic meter of air over a period of 24 hours.

India’s Supreme Court has rapped the government over its failure to mitigate pollution for residents who endure toxic air almost every winter when temperatures and wind speed drop and pollutants get trapped in thick smog.

The country’s top court also asked the Commission for Air Quality Management, a panel under the federal Ministry of Environment, Forest and Climate Change, to come up with measures to cut pollution.

After the Court’s intervention, the Commission on Wednesday shut down five coal-fired power plants around New Delhi, banned trucks carrying non-essential goods, and stopped construction in the capital and its satellite cities.

The panel also indefinitely extended the closure of schools, after the Delhi government ordered them to shut for a week last Saturday.

At least half of government employees should work from home until Nov. 21, it added.

November usually brings worsening pollution, with a surge in the concentration of tiny airborne particles, partly because farmers burn crop waste ahead of a new sowing season.

India’s efforts to reduce the burning of crop waste, a major source of air pollution during winter, have had little benefit, despite spending billions of rupees over the past four years.