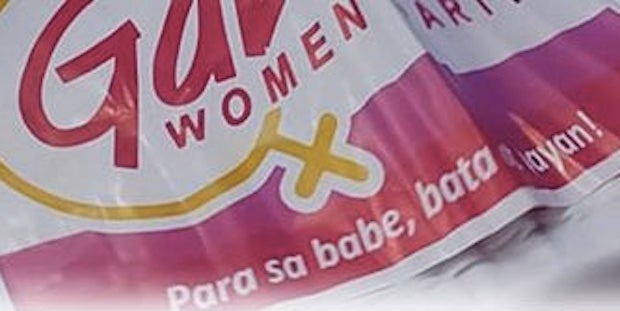 The tarp allegedly confiscated during the arrest of suspected communist rebels had a typo: Intead of “babae,” it had “babe” printed as part of the Gabriela slogan. (Photo grabbed from a Gabriela post on Facebook)

MANILA, Philippines — The Gabriela Women’s Party accused the Philippine National Police (PNP) on Wednesday of planting tarpaulins that allegedly came from the group, as “evidence” during the arrest of suspected communist rebels.

The party-list group was referring to the claim of the PNP that members of its Criminal Investigation and Detection Group (CIDG)  had confiscated tarpaulins of Gabriela and another progressive group Bayan Muna, along with firearms, explosives during the arrest of six suspected communist rebels wanted in Quezon City and Bulacan for murder, multiple murder, homicide, and arson.

“Maybe the police officers have been so accustomed to using ‘babe’ in their flirtatious relations with several women, or they were rushing to print the fake tarps ahead of our own printing without diligent proofreading,” it added.

With this typo, Gabriela said the PNP had been caught “red-handed” in its “desperate attempt” at red-tagging.

It explained that this is the exact reason why the party-list has been critical of the P30.46-billion budget for the National Task Force to End Local Communist Armed Conflict — “as we are well aware that it will be used for these kinds of lame black propaganda.”

“These red-tagging gimmicks, while not new, seek to place the lives and safety of our members and leaders on the line,” Gabriela said.

“We strongly condemn these publicly funded gimmicks and assert our firm stance against red-tagging and fake news,” it added.

“The operations conducted by your PNP were legitimate and the police officers were armed with valid arrest warrants issued by the court,” Ferro said in a statement.

“The pieces of evidence that were inadvertently found in the possession of the wanted persons were properly inventoried in the presence of barangay officials,” he added.

He then accused both Gabriela and Bayan Muna of merely wanting to discredit the police officers involved in the operation, adding that the CIDG would remain open to an investigation to shed light on the incident.