Myanmar says COVID-19 and internal conflict on the wane, looks to reopen borders 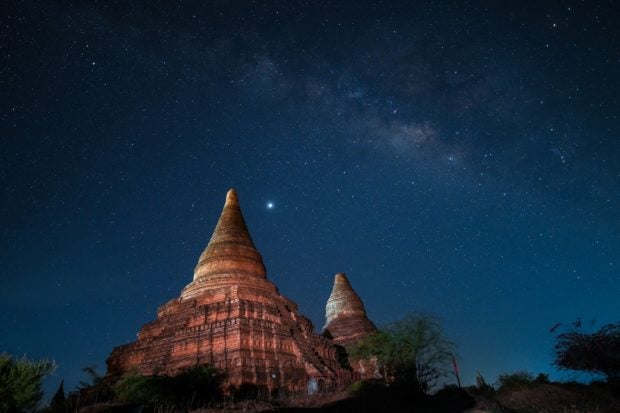 This photo taken on June 22, 2020 shows the Milky Way seen above pagodas in a temple complex in Bagan, Mandalay Region. AFP FILE PHOTO

SINGAPORE — Myanmar will reopen its land and international borders to international visitors after a Feb 1 military coup, in a step that will pave the way for more foreign investments and business recovery, Minister of Information Maung Maung Ohn told The Straits Times in an interview.

This comes even as reports of internal clashes between civilians and military forces continue to emerge from Myanmar and the World Bank forecasts that its economy could contract by more than 18 per cent this year.

The military-run State Administrative Council announced on Tuesday (Nov 16) that it will reopen land border crossings with China and Thailand by December, ahead ofa planned resumption of international air travel by the end of the first quarter of 2022, “as (Covid-19) vaccination rates have improved significantly”, according to a statement released on the Ministry of Information’s website.

“Travel restrictions will be eased at Muse in Myanmar, which borders Ruili city in China’s Yunnan Province, and at the three Myanmar towns of Tachileik, Kawthaung and Htee Kee which border Thailand,” the statement said.

Mr Maung Maung Ohn said that Bagan, Inle Lake and the Ngapali, Chaungtha and Ngwe Saung beaches have been earmarked as tourism hot spots, where tourist safety will be “taken care of” by the military and police force.

He said Covid-19 is “no longer an issue” in Myanmar, with the government continuing to receive vaccines mostly from China and other donors. As at Nov 12, the Ministry of Health has administered at least one dose of vaccine each to 14.4 million citizens above the age of 18, or 42.5 per cent of the population. This will increase to half of the population by the end of this year. The ministry says it will have sufficient vaccines to inoculate the entire population by April next year.

Those vaccinated include prisoners and members of ethnic armed organisations. “However, some individuals who had been involved in civil disturbance activities are reluctant to register for vaccination, especially in major cities,” Mr Maung Maung Ohn said.

The minister added that incidences of internal violence have subsided and no longer pose a threat to tourists. He added that domestic tourism has picked up and many hotels are booked up for the holiday season.

The Myanmar military on Feb 1 overthrew the government of Ms Aung San Suu Kyi in a surprise coup. Since then, clashes with a civilian resistance led by ousted lawmakers who form the National Unity Government have resulted in thousands of casualties. A nationwide strike has also pummelled the economy.

Last month, Asean leaders excluded military chief Min Aung Hlaing from their annual summit, citing the failure to take steps to end violence and start a dialogue with the opposition.

Before the pandemic, in 2019, the largest inflows of tourists to the country came from China and Thailand. China accounted for 39 per cent and Thailand 14 per cent of the total number of international tourists to Myanmar, according to data provided by the Ministry of Hotels and Tourism.

Mr Maung Maung Ohn said protocols for the easing of travel restrictions at the borders and for international flights will be announced in January. These will include quarantine and testing requirements for travellers as well as visa requirements.

He said terms and conditions for tourist visas will be arranged based on existing bilateral agreements. Currently, only travellers from Hong Kong do not need a visa. Singaporean travellers are being considered for visa exemption, the minister said.

Mr Maung Maung Ohn added that arrangements for expatriates to return to Myanmar are also under way and that requirements for business visas can be expected in January.

He said an economic recovery plan is being drafted and the Myanmar kyat has stabilised at 1,800 kyat per US dollar from a low of more than 2,000 kyat two months ago.