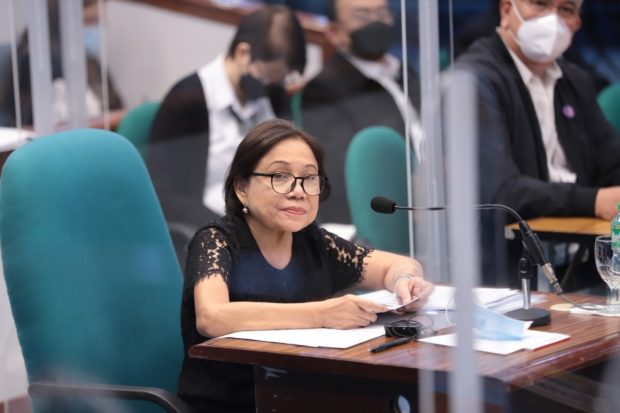 MANILA, Philippines — Several senators on Monday sought the restoration of P2.5 billion in the budget of the Department of Agrarian Reform (DAR) to support one of its projects that legislators deem “crucial” to the country’s goal of “improving land security tenure and stabilization of property rights of agrarian reform beneficiaries.”

During the Senate plenary debates, Senator Cynthia Villar said the House of Representatives, under its General Appropriations Bill (GAB), slashed P2.5 billion from the budget intended for the agency’s Support to Parcelization of Lands for Individual Titling (SPLIT) project.

“It is unfortunate that the house of representatives in their general appropriations bill sought the cut by P2.599 billion from the SPLIT project,” said Villar, who defended DAR’s proposed 2022 budget.

“I’m asking the support of the Senate in ensuring that the government be able to deliver what rightfully belongs to our agrarian reform beneficiaries, land that truly belongs to them, by reinstating the budget cut made by the House of Representatives,” she added.

According to Villar, the SPLIT project enables the subdivision of collective certificates of land ownership awards (CLOA) into individual land titles.

“The SPLIT project is crucial in our goal in improving land security tenure and stabilization of property rights of agrarian reform beneficiaries and achieving poverty reduction,” she said.

Villar further noted that the SPLIT project is set to be implemented using a loan granted by the World Bank.

The World Bank, she said, will provide P19.24-billion financial support to the project with a P5.38-billion government counterpart for a total of P24.6 billion.

As the SPLIT project is considered a foreign-assisted project, Villar pointed out that the proposed funding intended for it cannot be used for another purpose.

“It cannot be used for any other purpose except that because that is the loan from the World Bank, so by not using it, we have to pay a commitment fee of around P11 million for not using it. So I think they (House) did not understand this, they thought they could transfer it for some other purposes,” she said.

Senate Minority Leader Franklin Drilon said he agrees with Villar and backed her call for the restoration of the amount under the Senate’s version of the 2022 budget.

“I join the good sponsor in appealing to the chamber to restore this amount because this is sourced from borrowings and if we don’t use it, we will have to pay a commitment fee of P11 million and also I assume the interest will start to run. So there is really no rationale for reducing this budget arising from the World Bank loan,” Drilon said.

Asked by the minority leader where the P2.5 billion could have been transferred, Villar said: “I have no idea where.”

“But it cannot be transferred because it is a loan proceed,” she added.

He also noted that the P2.599 billion may have been transferred to the farm-to-market road budget of the Department of Agriculture (DA).

“This is not conclusive yet—there’s an increase in the farm to market road budget in the DA in the amount of P1.97 billion from P4.98 billion to P6.9 billion in the GAB—the House version. So mayroong missing talaga, more or less that amount,” Lacson said.

“So it’s important that we find it because we are with you (Villar) in restoring that budget. Sabi niyo nga, hindi pwedeng galawin, magbabayad tayo ng commitment fee for nothing cause we can’t use it for any other purpose,” he added.