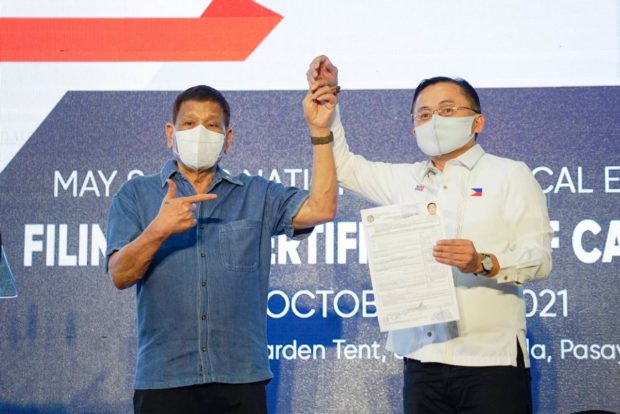 MANILA, Philippines — Presidential aspirant and Senator Christopher “Bong” Go said that he accepted the challenge to lead the country to continue the reforms initiated by President Rodrigo Duterte.

Go, a long-time aide of Duterte before he was elected senator in 2019,  launched his bid for president on Saturday when he substituted for Grepor Belgica as the standard-bearer of the Pederalismo ng Dugong Dakilang Samahan party.

(If I need to step up for the sake of the administration and continue the reforms initiated by President Duterte, I’ll do it.)

(I love President Duterte.  I don’t want him to get hurt or feel offended.)

Go vowed to work hard to fulfill Duterte’s remaining plans which are beneficial to Filipinos.

“The Filipino people should eventually be the winner in this election. While we head towards that, I have to consider the stand of my political party, led by President Duterte, which will both help us achieve our objectives,” Go said.

He noted his commitment to Duterte’s war on drugs, crime, and corruption and promised to push for the continuity of programs and projects to further improve the lives of Filipinos.

President Duterte earlier also revealed that he will run for vice president next year.