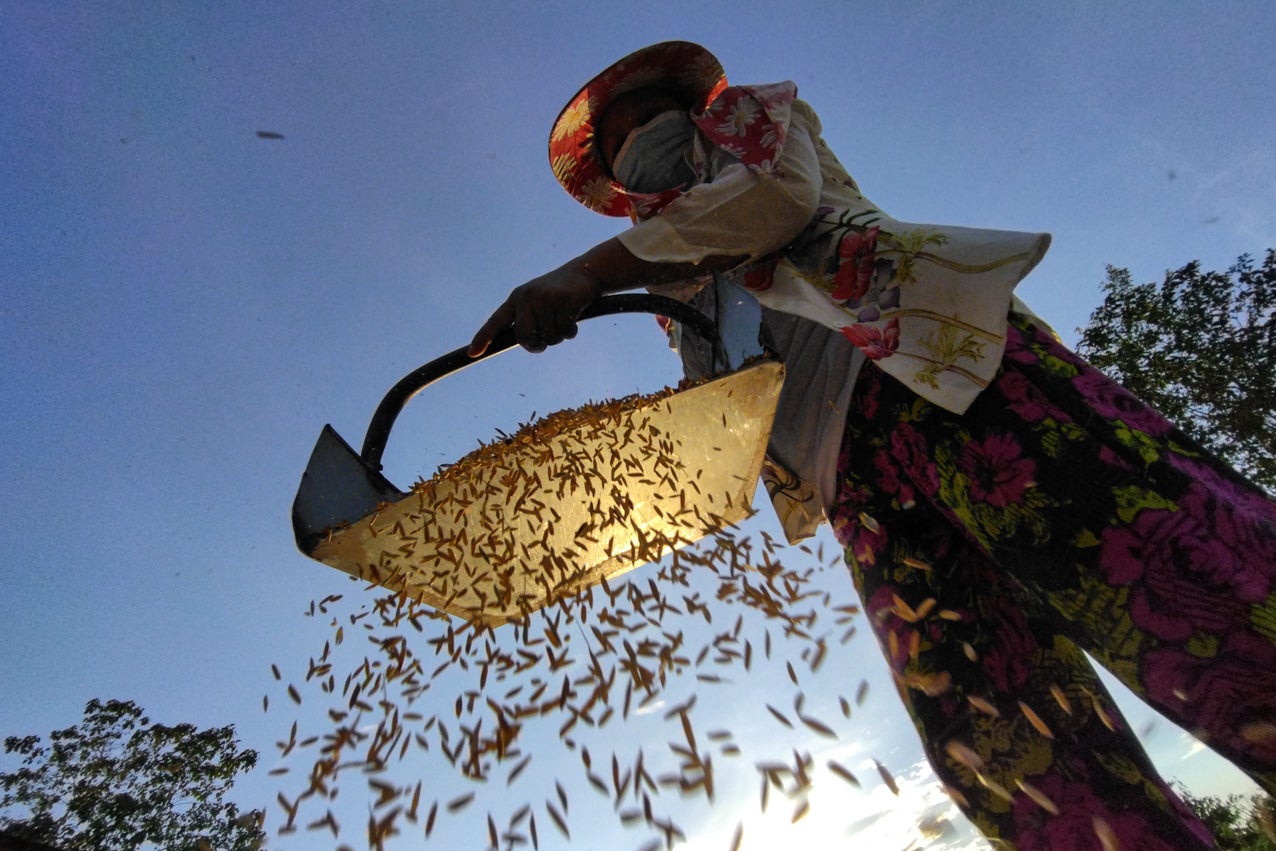 PRECIOUS GRAINS Farmer Irene Soriben uses a “saki” (rice shovel) to collect sundried palay (unhusked rice) at a rice drying facility in the village of Kita-Kita in Balungao, Pangasinan. The government says food producers, like rice and vegetable farmers, and workers in the agriculture industry, will be key in the country’s economic recovery after the pandemic. —RICHARD BALONGLONG / FILE PHOTO

MANILA, Philippines—As the Philippines celebrates National Rice Awareness Month this November, the face of rice being consumed by Filipinos is likely to be that of a Vietnamese or a Thai farmer.

Importation is digging a deeper pit for Philippine farmers in the belief that allowing rice grown in other countries to enter Philippine markets with virtually no limit would keep prices stable for consumers.

November is supposed to be National Rice Awareness Month, according to Proclamation No. 524 issued by then-President Gloria Macapagal Arroyo on Jan. 5, 2004.

The celebration coincided with the anniversary of the Philippine Rice Research Institute (PRRI), created by Executive Order 1061 on Nov. 5, 1985.

But raising awareness on rice and its production would inevitably lead to an ugly picture—how Filipino rice farmers continue to suffer not only during the COVID pandemic but also because of other factors that have been bludgeoning the agriculture sector.

According to data released by the Philippine Statistics Authority (PSA) on Nov. 8, there was a 6.7 percent increase in palay production for the third quarter of 2021. 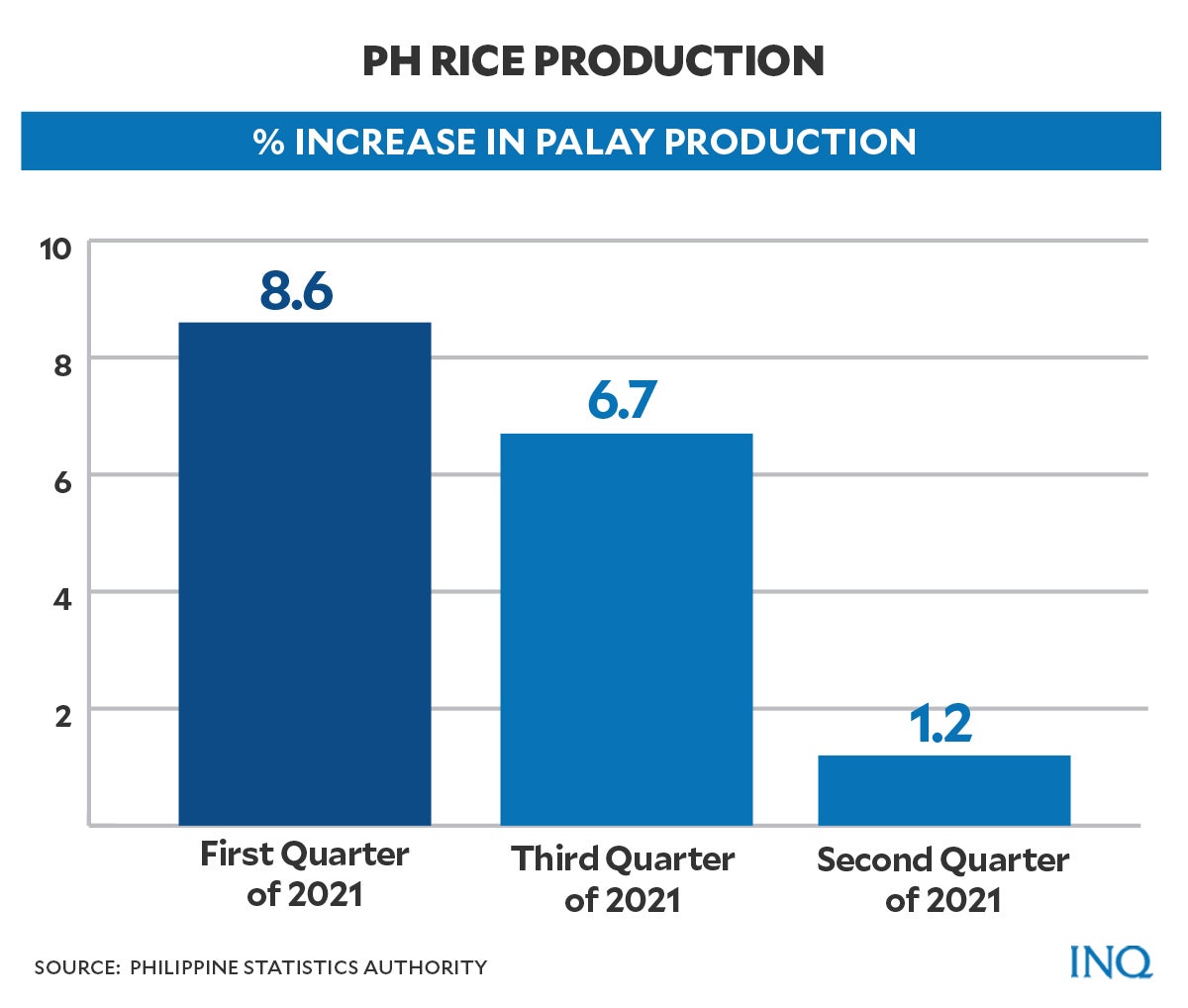 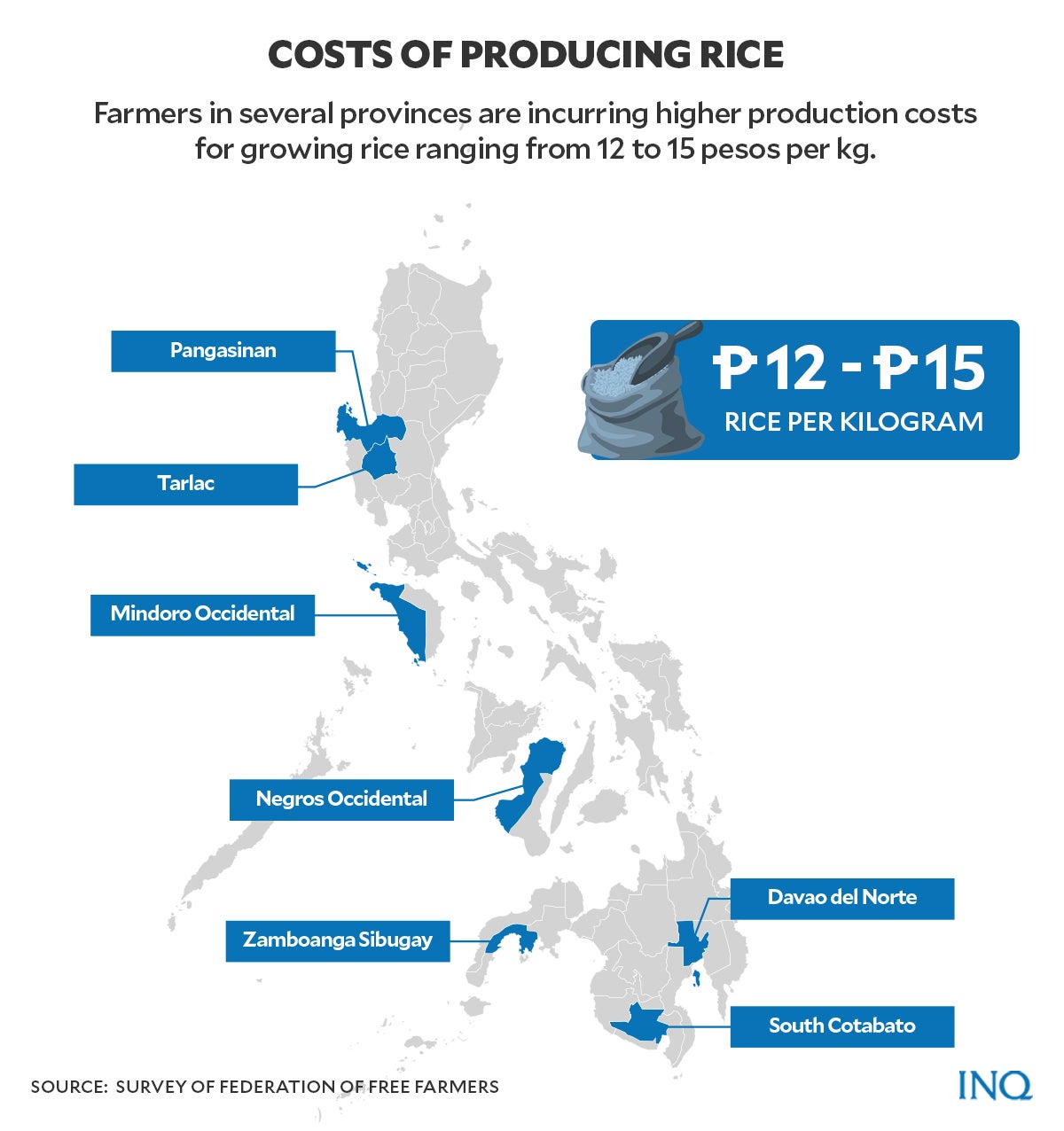 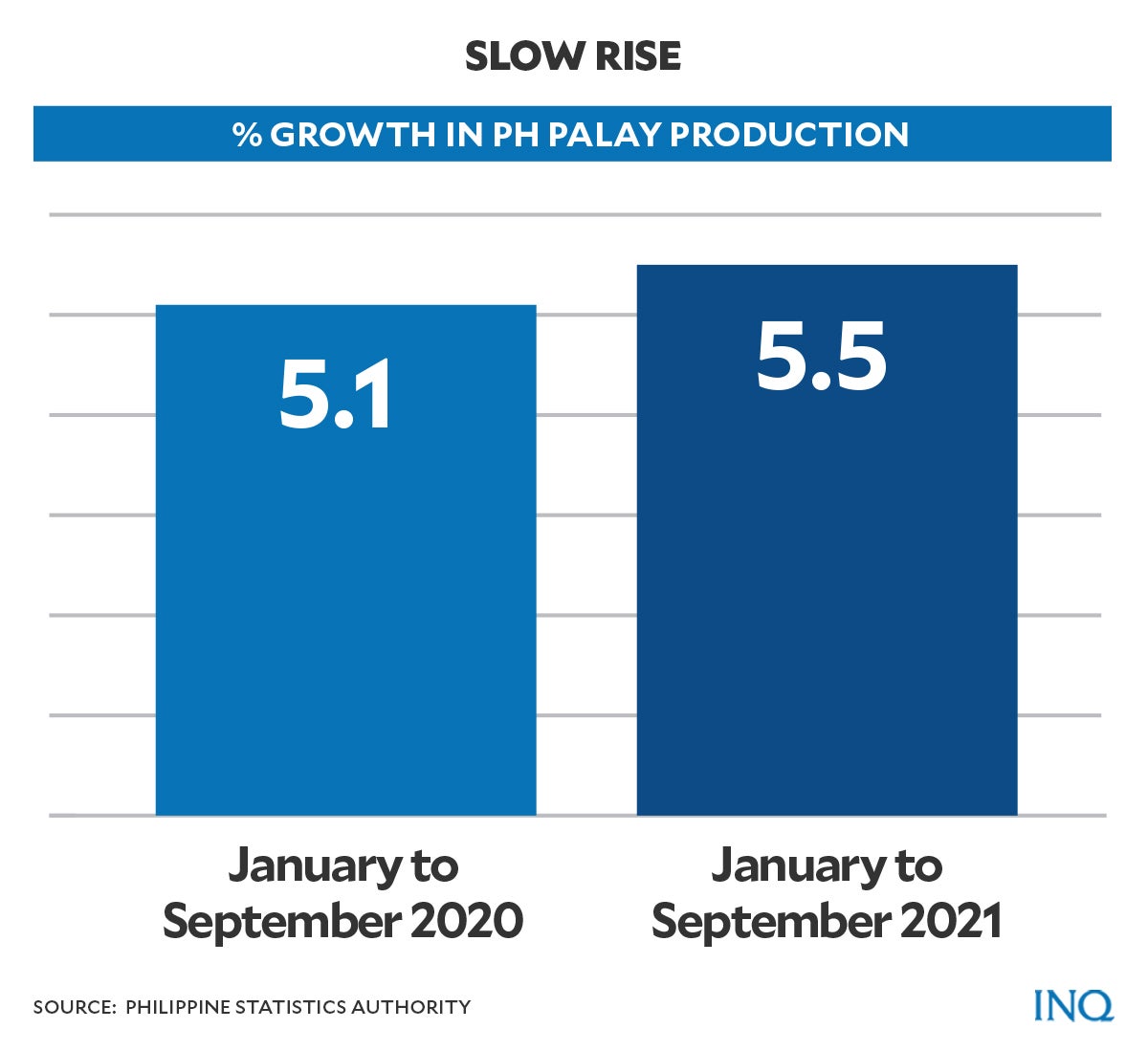 At current prices, the value of palay produced during the third quarter of 2021 was around P82 million.

Results of a survey released in September by Federation of Free Farmers (FFF) showed that in provinces like Pangasinan, Tarlac, Mindoro Occidental, Negros Occidental, Zamboanga Sibugay, Davao del Norte and South Cotabato, the production cost of palay ranged from P12 to P15 per kilo.

The production cost for palay was P14 to P15 per kilo in Sultan Kudarat province, according to the FFF survey results. 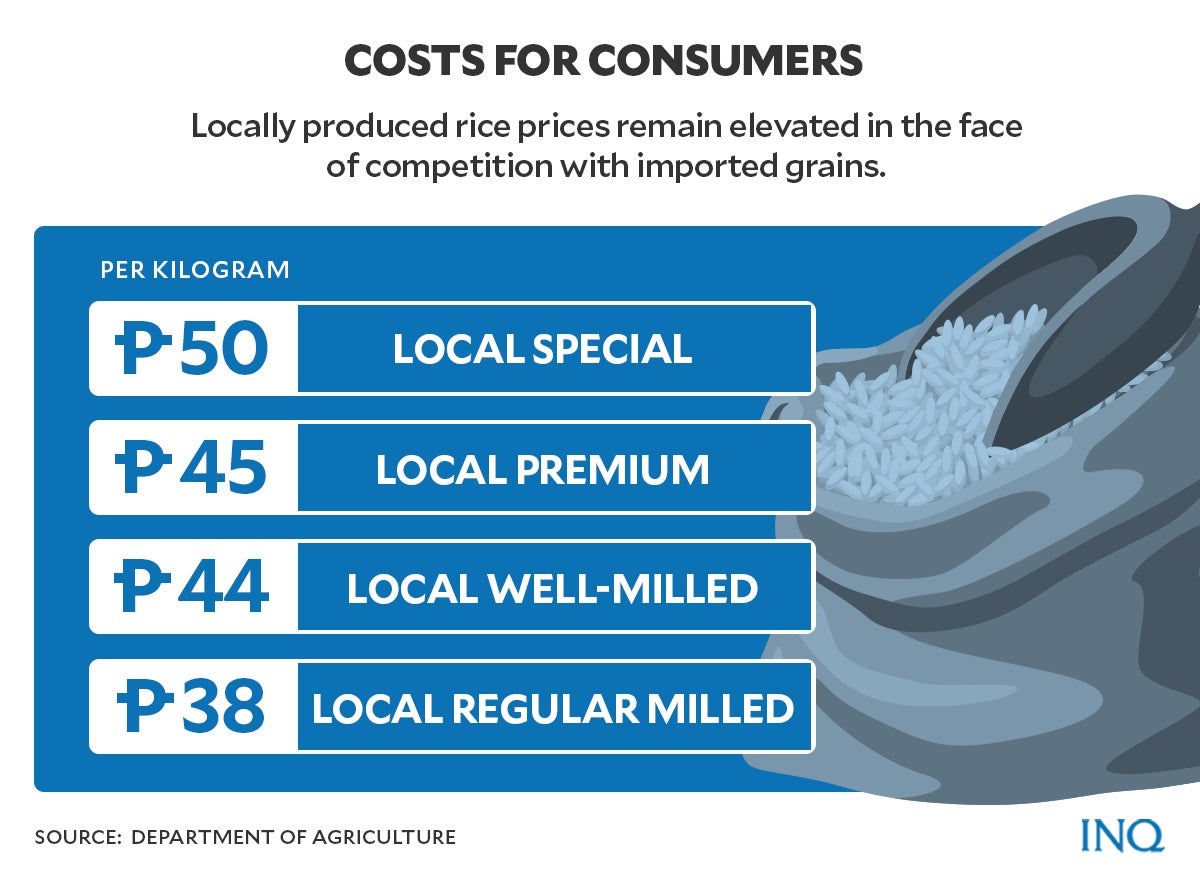 Data from the Department of Agriculture (DA) showed that as of Nov. 5, the retail prices for locally-grown rice in the Philippines were:

The low farm gate prices of palay were paired with the bulk importation of rice despite an increase in palay output in the country during the past few months. 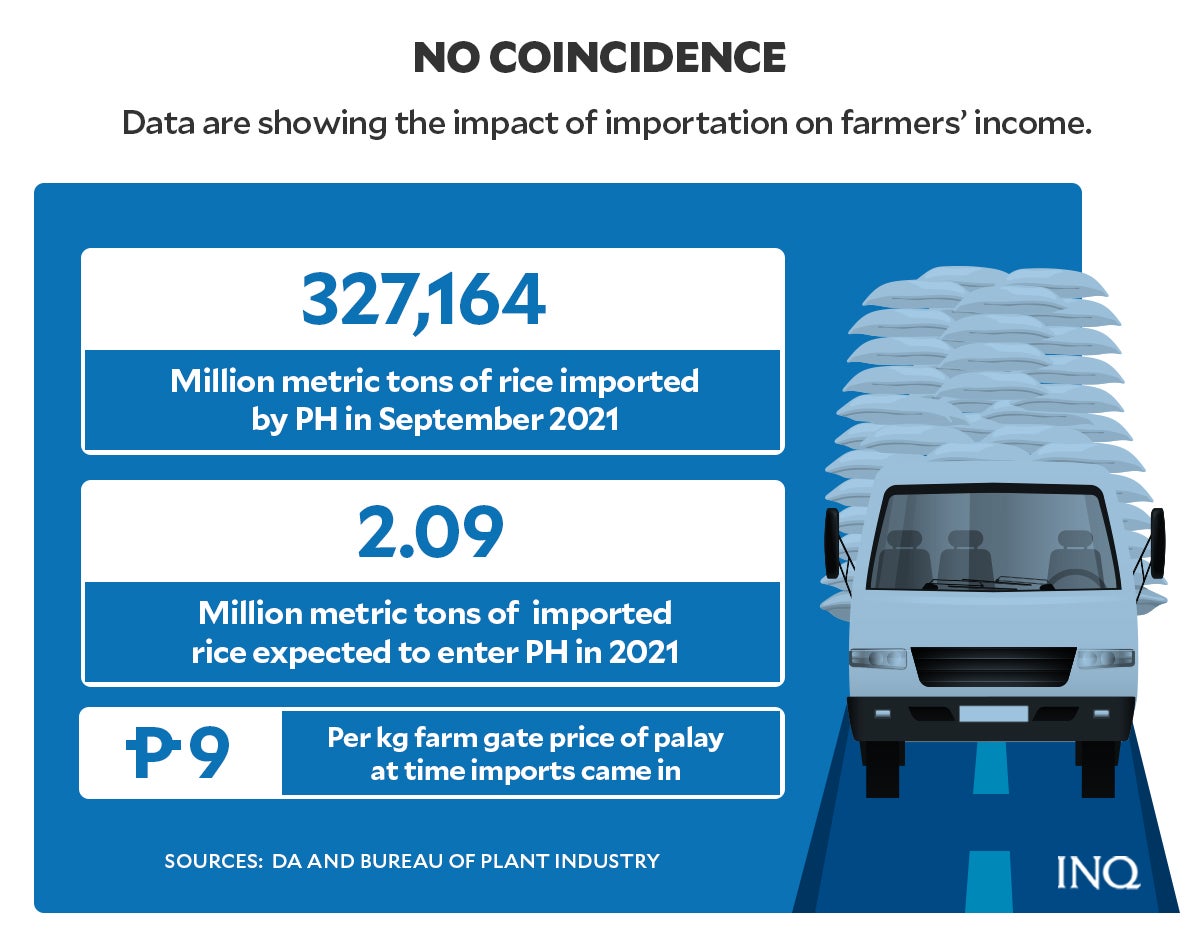 In September, at least 327,164 MT of imported rice entered the country’s ports, based on data from the Bureau of Plant Industry (BPI). This was also when farm gate prices of palay were at a low of P9 per kilogram in some provinces.

From January to September, around 1.99 million MT of rice arrived in the country. This is 7,000 MT short of last year’s import volume ceiling of 2.06 million MT. 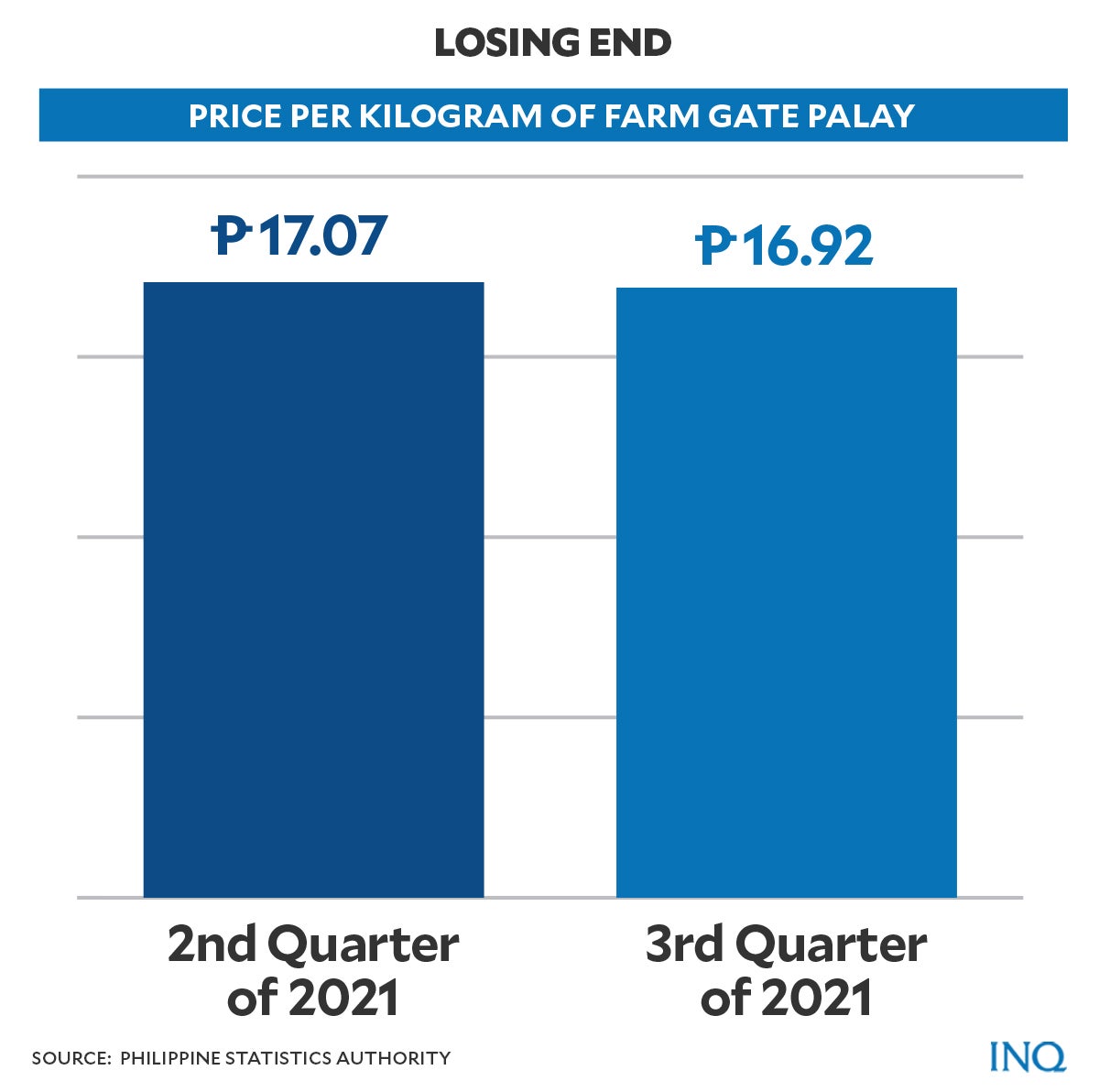 During the same period, at least 5,800 import clearances for 4.49 million MT of rice grown in Vietnam or Thailand were approved by the BPI.

According to the DA’s price watch, as of Nov, 4, the retail prices of imported rice were:

Imported rice is cheaper than locally produced rice which makes it a struggle for Filipino farmers to compete. Some farmers are left barely surviving with little to no income as production costs stood at around P12 per kilo.

The Department of Agriculture (DA) estimated that the country’s rice imports might reach 2.09 million MT this year. 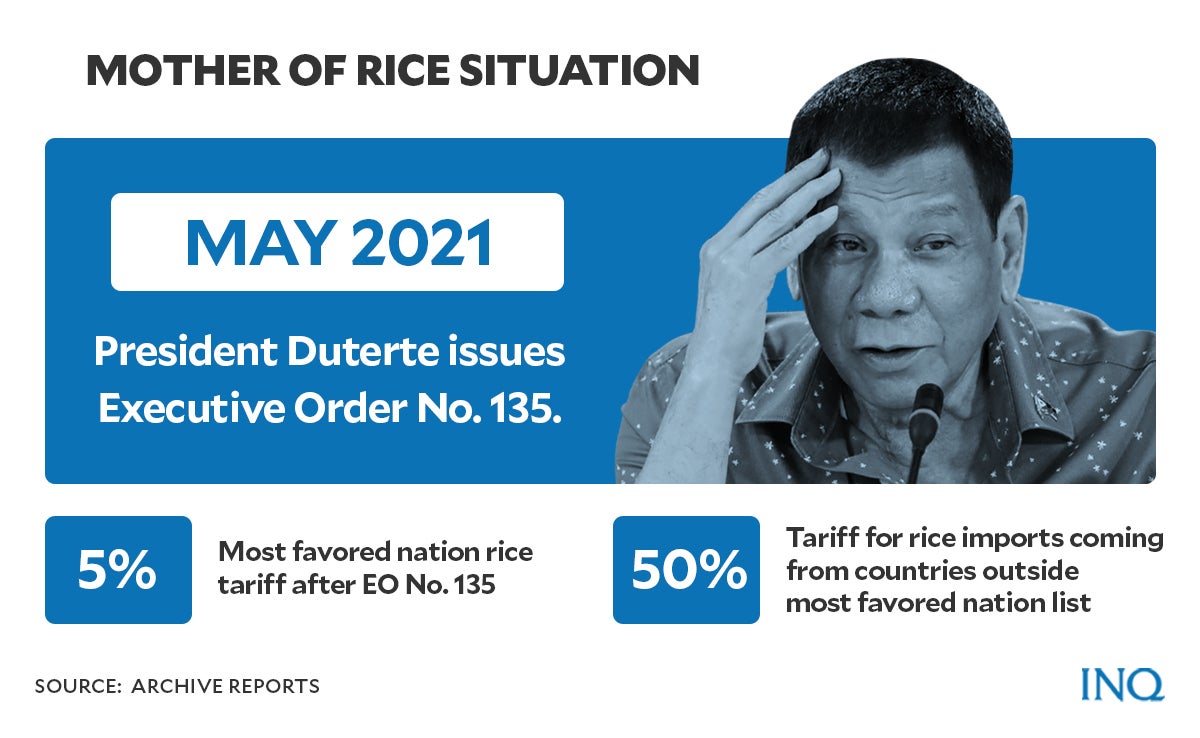 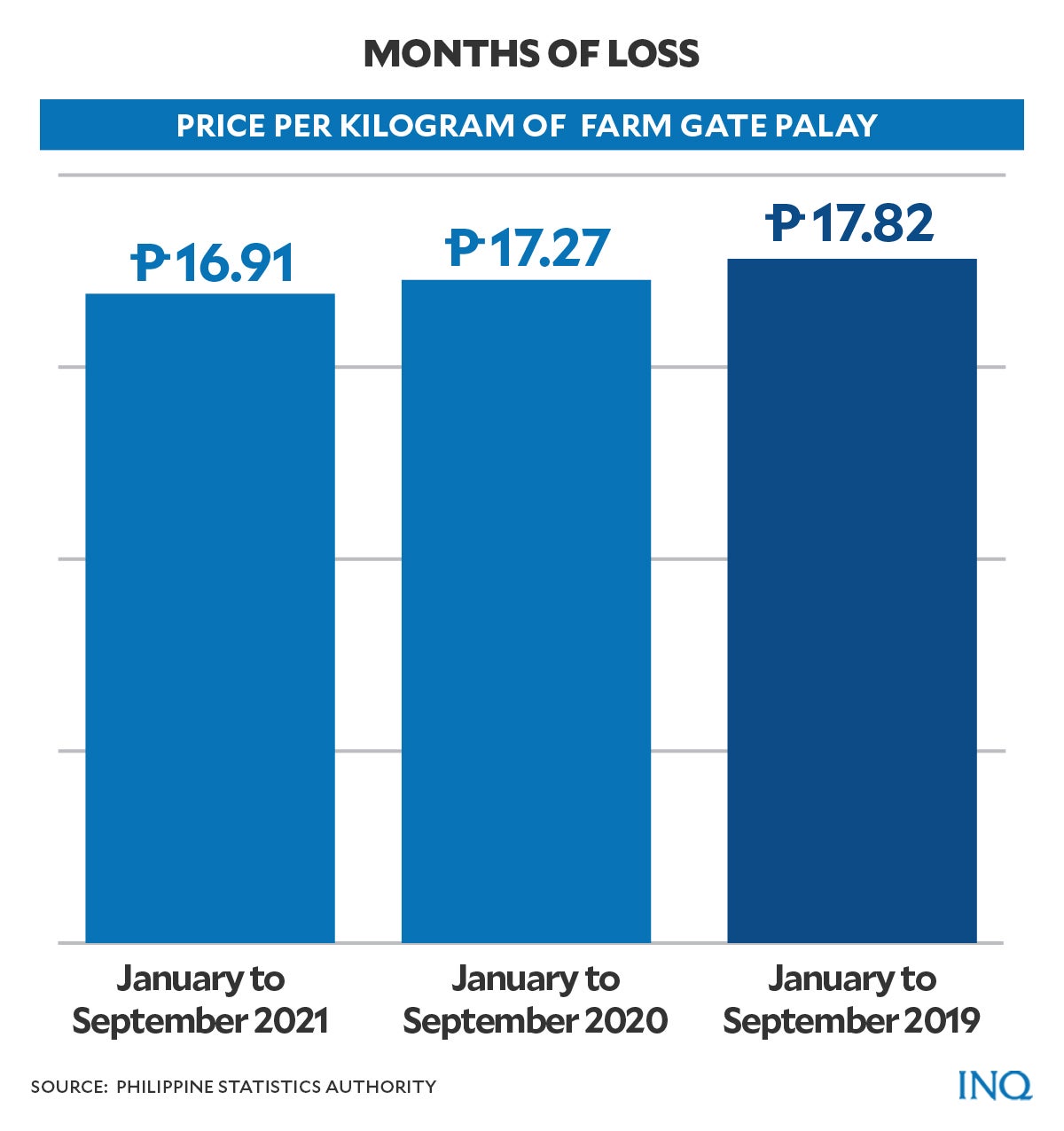 As palay prices continue to drop and were expected to further dip this November, the Federation of Free Farmers (FFF) urged Congress last month to review the rice tariffication law (RTL).

Congress has a “moral responsibility to promptly rectify any deficiency, or omission in the law before these bring more harm to our farmers,” said FFF national chair Raul Montemayor.

“They also need to address indications that the benefits of rice trade liberalization have been captured mostly by market intermediaries, while consumers have not benefited significantly from cheaper rice,” he added.

According to FFF’s analysis of data from the Bureau of Customs (BoC), from January to September this year, rice imports were undervalued by an average of P4,983 per ton.

It was four percent higher than the level of undervaluation in 2020, which resulted in a total revenue shortfall of P3.1 billion.

The group said the shortfall “is almost equal” to the forgone tariff for the whole of 2020.

Since the implementation of RTL in 2019, around P7.5 billion tariff collections were lost due to undervaluation.

“Undervaluation and misdeclaration of rice imports have actually worsened, despite assurances from BoC that they would adopt reforms in their classification and valuation procedures based on the FFF’s recommendations,” said Montemayor.

Undervaluation, FFF said, “does not only deprive the government of much-needed revenues, but also lessens the funds that are supposed to go to rice farmers.”

According to Food and Fertilizer Technology Center for the Asian and Pacific Region (FFTC-AP), around P98 billion worth of rice had been smuggled into the Philippines from 1986 to 2009.

The DA has recently called on local governments to help around 900,000 farm workers who have lost their jobs due to the series of typhoons that have devastated agricultural lands in the country.

According to the PSA, 862,000 farm workers were displaced in September, following the impact of Typhoon Jolina, which damaged over 30,000 hectares of agricultural land and destroyed P1.36 billion worth of agricultural infrastructure.

“But obviously, the task is too huge for DA to handle alone. The [local governments] should be mobilized as their primary mandate is to deliver basic services to their constituents.”