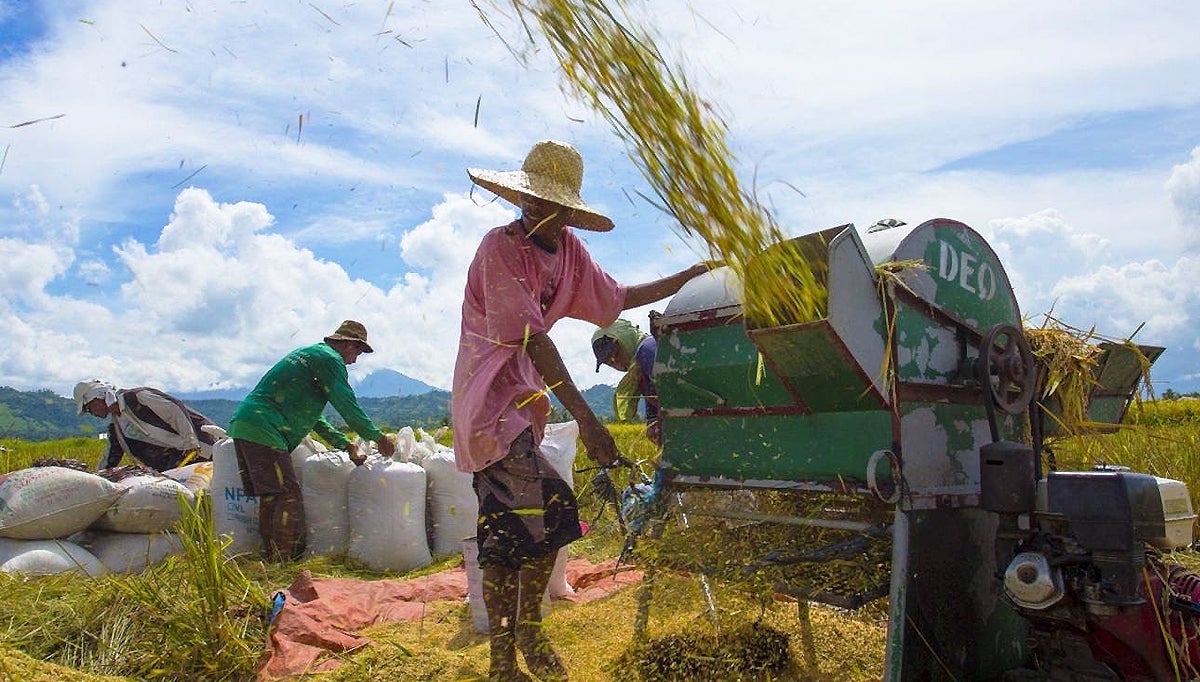 MANILA, Philippines—Prior to COVID-19 pandemic, the agriculture and fisheries sector in the country had been “stagnating.” The pandemic came in like a strong wave, hit the sector, and pushed it further from the shore—far from possible recovery.

“Under the pandemic, agriculture has been weakened further by transport and logistical breakdowns, aimless import liberalization, lack of health facilities to contain the virus spread, and poor distribution of amelioration assistance to the rural masses,” a group of agriculture and fisheries organizations said.

“We demand a reversal of this situation,” the groups said.

“Agriculture can and should play a leading role in national economic recovery and, more importantly, in ensuring social and economic development for all.  To achieve this, urgent policy reforms must be institutionalized and implemented with decisiveness,” the statement read.

As the next national elections draw nearer, the organizations listed major development challenges that President Rodrigo Duterte’s successor was likely to grapple with.

The next administration, the groups said, should transform agriculture “into an engine of economic growth, a generator of jobs, a social and economic stabilizer in the countryside and the cornerstone of the country’s food security.” 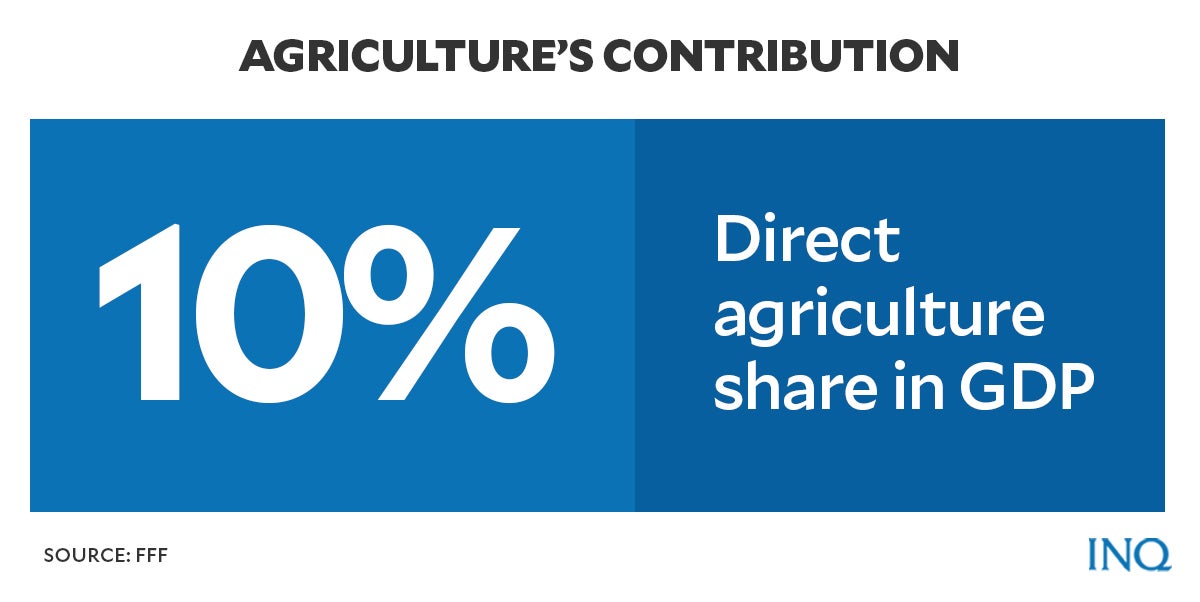 To guide the next leaders on this new challenge ahead of them, the organizations detailed the plight of farmers and fishermen and listed recommendations to improve the agriculture sector’s current condition.

Agriculture and fisheries sector, according to the group of agri-fisheries organizations, accounted for 30 percent of the country’s labor force.

This consisted of some 10 million small farmers — with three hectares or less of farm lands — farm workers, forest settlers, municipal fisherfolk, and other small-scale producers.

Based on the August 2021 Labor Force Survey (LFS) by the Philippine Statistics Authority (PSA), out of the 44.23 million employed persons in August, 25.1 percent were from the agriculture sector.

The Agricultural Indicators System (AIS) report released in June showed that the agriculture, forestry, and fishing sectors had a 10.2 percent contribution to the country’s gross domestic product (GDP) in 2020.

The gross value added (GVA)—used to measure the performance of the sector—in agriculture, fisheries and forestry in 2020 prices was P1.8 billion.

However, with the 25 percent contribution from activities dependent on agriculture — such as agro-processing and ancillary services — the sector’s total GDP contribution rose to 35 percent.

Unfortunately, despite improvements in direct and indirect contribution of the sector to GDP, the Department of Agriculture (DA) will only get two percent of the national budget for 2022.

Based on documents from the Department of Budget and Management (DBM), out of the proposed P5.024 trillion national budget for 2022, the DA will get only P72 billion next year. 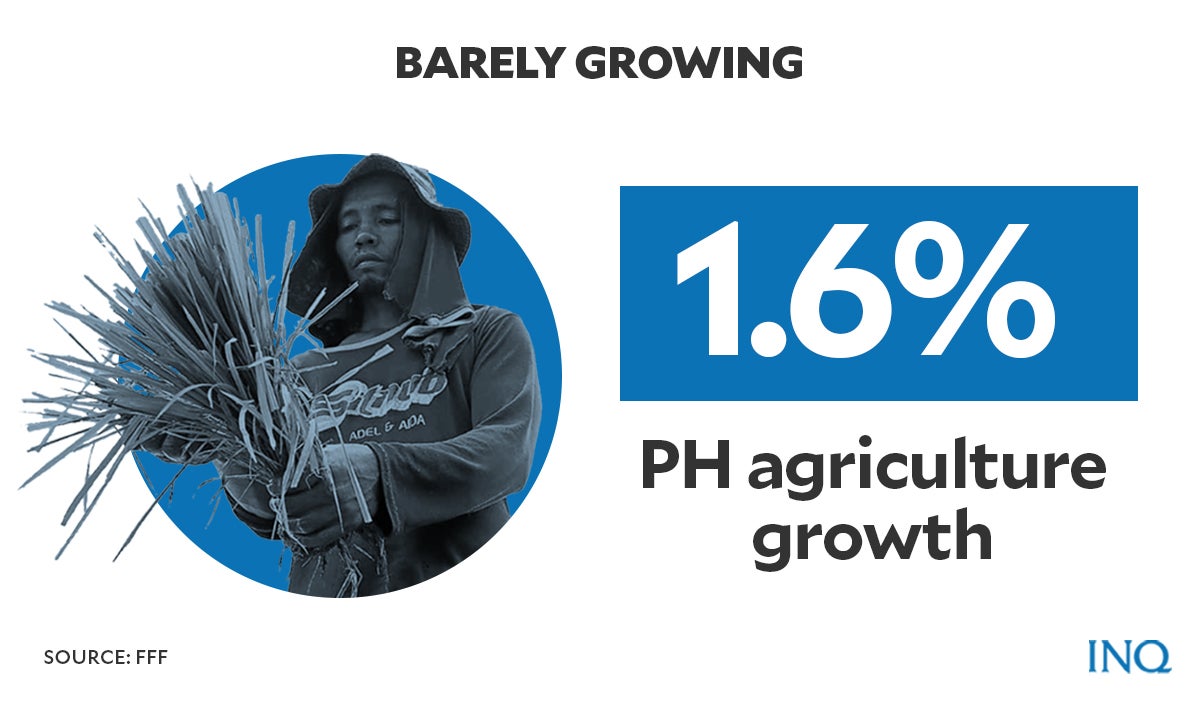 This was after the DBM rejected the DA’s proposed P250 billion budget for 2022.

According to Ibon Foundation, a non-profit research group, the “negligible budget” for agriculture reflected the Duterte administration’s “glaringly low prioritization” of the sector.

“The already dismal 3.6 percent average annual share of agriculture and agrarian reform in the 2017-2021 national budgets under Duterte has fallen to an even smaller 3 percent in the proposed 2022 budget,” the group said in a statement.

“This average is also the lowest since the Ramos administration (3.5%),” it added.

The group also noted that the government’s lack of support for the sector has worsened the decades-long decline of agriculture.

According to the Ibon Foundation, the agriculture sector grew by an annual average of 1.6 percent in 2017 to 2020 under President Rodrigo Duterte’s administration.

The sector’s annual average contribution of 9.8 percent of GDP in 2017 to 2020 was also the smallest among post-Marcos administrations.

The Philippines also had a $7.7 billion average annual agriculture trade deficit in 2018 to 2020 — the largest three-year deficit in the last four decades.

The group of agri-fisheries organizations also listed some of the major issues of the sector, which included lack of land tenure security by farmers.

According to the 2012 Census of Agriculture and Fisheries (CAF), Philippines holders or farm operators manage around 5.6 million parcels of land covering at least 7.3 million hectares. 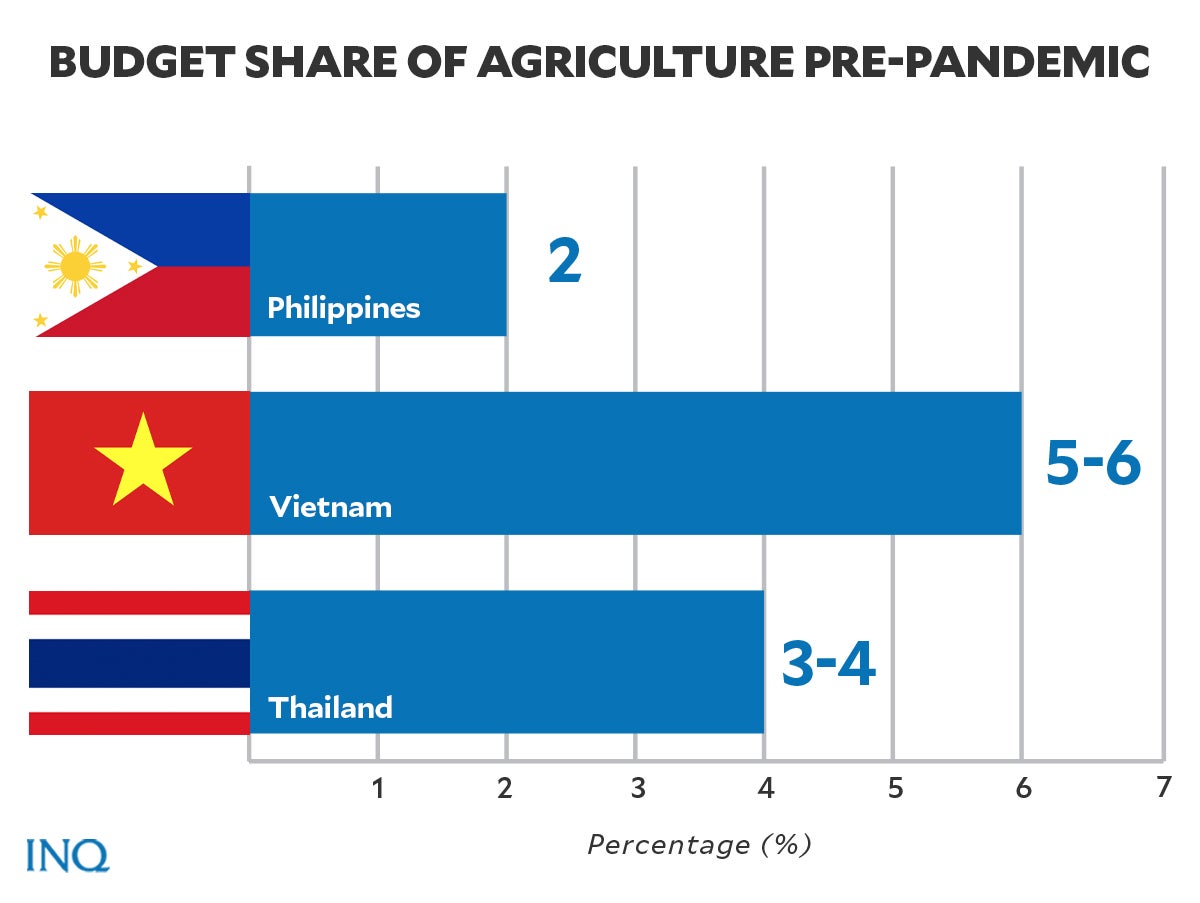 The PSA-led census also detailed that at least 46 percent of the country’s total holding or farm parcels were already fully owned by holders or farm operators.

According to the Department of Agrarian Reform (DAR), during the previous months hundreds of farmers have been granted land ownership after a wait of many years.

In March, 149 families received an 81.85-hectare government-awarded hacienda in Pili, Camarines Sur after a 27-year-ordeal against a private corporation. In the same month, 249 agrarian reform beneficiaries (ARBs) from Capiz province were awarded a total of 398 hectares of agricultural land.

The following month, DAR said 3,500 ARBs from SOCCSKSARGEN have also received Certificate of Land Ownership Awards (CLOA) from the department.

The farmers’ groups also raised as an issue limited catch of marginal fishermen because of “continuing encroachment by outsiders into municipal waters and fishing areas within the country’s territorial sea.” 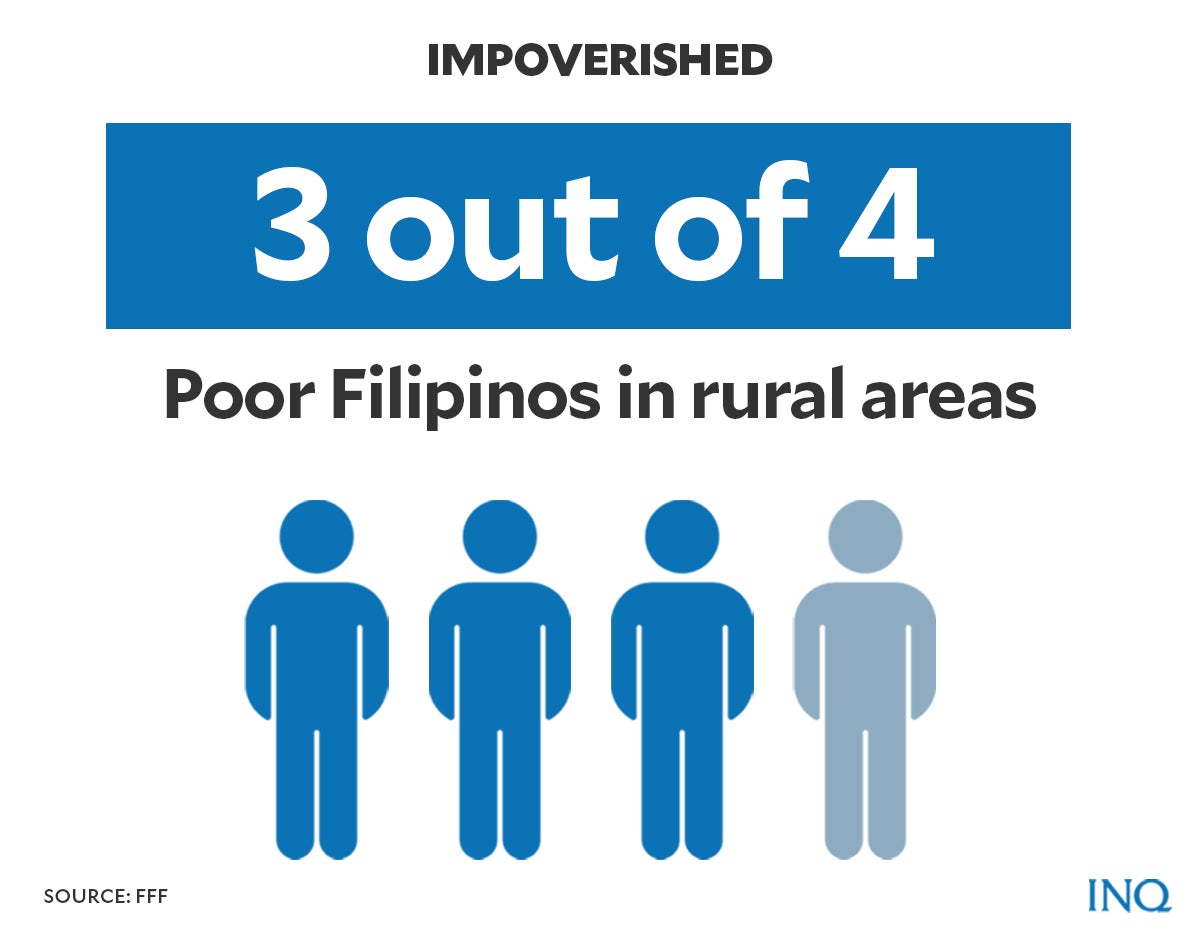 Other issues were lack of agricultural support services, limited processing of raw produce, inefficient marketing, transport, shipping of farm products. Also contributing to poverty in the agricultural sector were poor income of producers and shortage of local supply and high prices for consumers.

“The Philippines is a net food importing country,” the farmers’ groups said.

“In recent years, excessive importations of agricultural and fisheries products – without the proper safeguard measures and safety nets provided by law – have seriously depressed farmers’ incomes,” they said.

“Yet, consumer prices have fallen minimally,” they added.

Ibon Foundation said that the country’s dependence on food imports continued to escalate during the current administration due to the lack of importance given to programs to boost domestic agriculture.

The import dependency ratio, according to the group, has also increased significantly over the same period in the following products:

FFF and the other farmers’ groups also expressed lament over land conversion, degradation of natural resources including soil, water sources, forests and other natural habitats.

According to data by the DAR, a total of 97,592.5 hectares of agricultural land — the size of Metro Manila and Cebu City — were approved for conversion to non-agricultural purposes between 1998, the year the Comprehensive Agrarian Reform Law took effect, and 2016.

The approved conversion applications in DAR regional offices consist of 80.6 percent of agricultural land in Luzon, 7.8 percent in Visayas and 11.6 percent in Mindanao.

Pending applications for conversion, agricultural land reclassified by local government units, and illegally converted lands are, however, not included in the data. 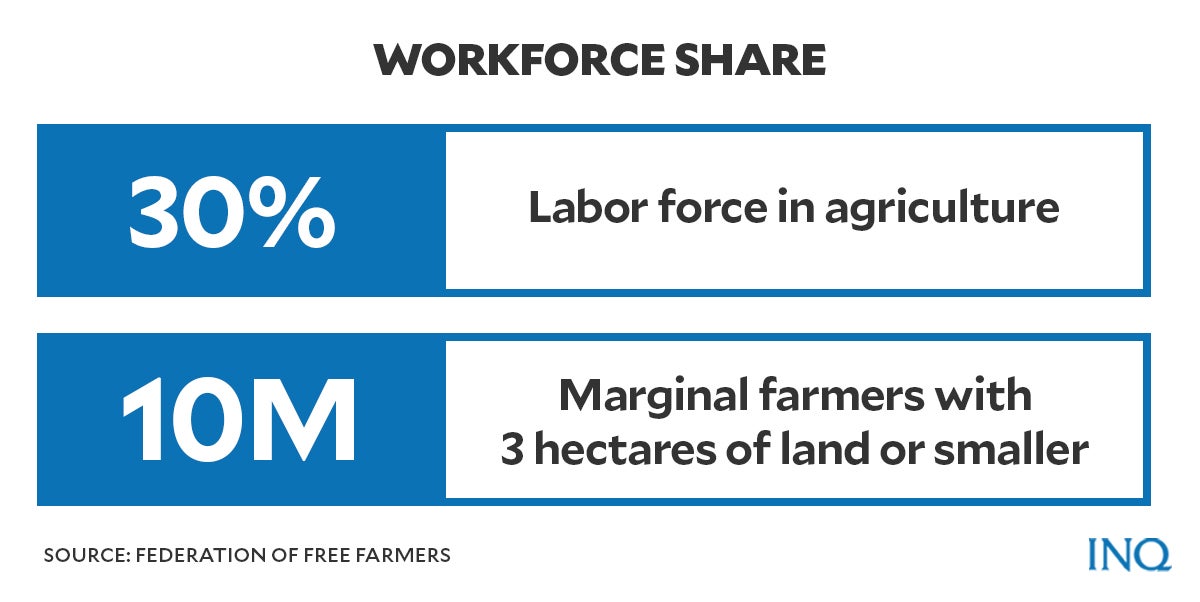 These issues resulted in widespread poverty and loss of livelihood for the country’s small farmers and fisherfolk.

“Three out of every four poor Filipinos are in rural areas,” said the groups.

According to the Ibon Foundation, the poverty incidence among farmers was 31.6 percent and 26.2 percent for fisherfolk—both much higher than the national average of 16.7 percent.

“Under the Duterte administration, an average of 328,000 agricultural jobs were lost annually from 2017-2020, which is the worst among the last six administrations,” the group said.

The farmers’ groups listed some of measures which they said were must-do by the next administration.

Some of these were:

Importation, the groups said, “must be a last resort.” Income from imported goods should be shared among producers and consumers. The Rice Tariffication Act must be reviewed and changed.

The DA, the groups said, should lead the shift from mono-cropping to diversified farming.

Rural credit and crop insurance must not be exceptions but the norm, the groups said.

“Mechanization, digital technology and appropriate innovations should be fast-tracked,” they said.

Province-led agriculture and fisheries extension systems must be fully implemented as these could help strengthen partnership between the DA and local government units.

Other recommendations by the groups for the next administration included:

“Women have a limited participation in areas like fisheries production, agricultural services and equipment or facilities,” the organizations noted.

Based on data from PSA, around 84 percent of the 5.6 million holders or farm operators were male while only 16 percent were female.

“Hence, this explains the nil percentage of female holders or farm operators in the country,” the report said.

Wage distribution by gender of farmworkers likewise favored males. Male farm workers can receive up to P335 salary per day while women farmworkers will only get P304.

The farmers’ groups called for equity, productivity and justice for a bigger women’s empowerment program in agri-fishery.