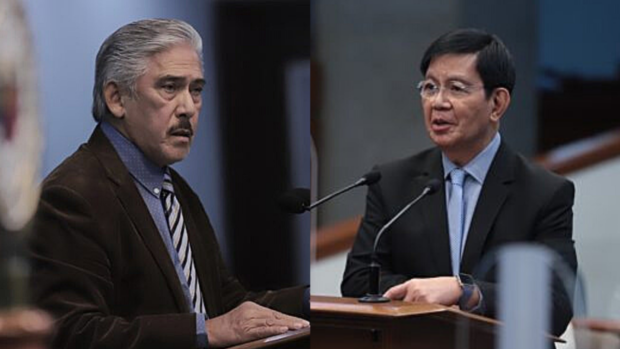 MANILA, Philippines — The national government must learn to move from resorting to lockdowns just to manage the COVID-19 pandemic, as both Senator Panfilo Lacson and Senate President Vicente Sotto III believe these measures are very detrimental to society.

Lacson and Sotto, who are seeking the presidency and the vice presidency in the 2022 national elections, favor the opening of the economy to revive industries hard-hit by the lockdowns, including the most recent one last August and September due to the COVID-19 Delta variant.

Sotto in particular said that lockdowns only serve to delay the transmissions — stressing that the right thing to do is to prevent infections in the first place.

Lacson said that with the bulk of vaccines that has arrived in the country, it could be a perfect time to open the economy again as the country can no longer sustain being under lockdown.

Lacson and Sotto’s statements came after they were asked about the national government’s recent moves to ease lockdown restrictions, as part of a continuous effort to revive the economy.

Since the last surge in cases, Metro Manila and other areas have gone down to either Alert Leven 3 or 2, with COVID-19 cases on the downtrend.  However, several public health experts have warned against complacency, because there are still COVID-19 variants being observed that may cause new surges.

However, Sotto also expressed concerns that the quality of education in the country may be spiraling down due to a lack of face-to-face classes for two school years — which can only be solved by opening schools again.

The tandem’s suggestions echo that of other presidential candidates, particularly Vice President Leni Robredo and Manila Mayor Isko Moreno, who have long advocated for a better COVID-19 response that would prevent lockdowns.

Last August 4, Robredo said that the lockdowns should just be a stop-gap measure, meant to temporarily stop the growing infections, not a permanent solution.  Then as early as February 21, she has urged the national government to open classes in areas where there are no COVID-19 transmissions or where cases are low.

For Moreno, in July 17, he has asked Filipinos to stop relying on lockdowns, as the government should be proactive in monitoring the Delta variant which was becoming a looming threat during that time.

Lacson and Sotto have been upfront with their platform, which is to provide local government units (LGUs) more leeway and power in managing their localities — from development projects and even COVID-19 response.

The tandem believes that decentralizing the national government — which has become too top-heavy — would usher in development for depressed sectors and rural areas.