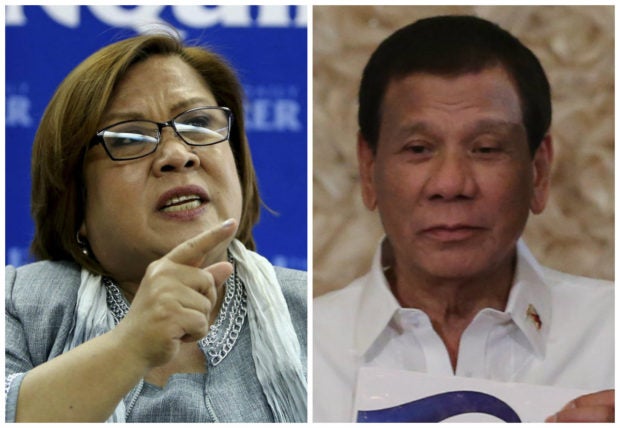 If President Rodrigo Duterte is tried for crimes against humanity for his administration’s bloody drug war killings, detained Senator Leila de Lima will be his first witness at the International Criminal Court.

MANILA, Philippines —President Rodrigo Duterte said on Thursday that detained Senator Leila de Lima would be his first witness at the International Criminal Court (ICC) if he is tried for crimes against humanity for his administration’s bloody drug war killings.

Even though Duterte said he would not cooperate with any investigation by the ICC since the court has no jurisdiction over the Philippines, he said he would like to go to the Hague and “give a speech.”

“I would love to go to where that Hague court is, without necessarily submitting to its jurisdiction. I would like to give a speech there,” in a speech during a meeting of the national and regional task forces to end local communist armed conflict in Palawan.

“But worse comes to worst, kung talagang may (if there’s a) trial, my first witness will be De Lima,” he added.

As to why he would ask De Lima to be his witness, he did not elaborate.

The President reiterated that the Rome Statute has never been binding because it has not been published in the country’s Official Gazette.

Additionally, he stressed that he would not be subject to any investigation or prosecution outside of the Philippines.

In an earlier speech on Thursday, he said he would never accept the jurisdiction of the ICC “even if hell freezes over.”

“They want me to go to prison. Well, maybe. But, it has to be a Philippine prison and I must be judged by a judicial court of the Republic of the Philippines and I must be prosecuted—like me when I was a prosecutor before—kailangan Pilipino ka (you need to be a Filipino),” he said.

(What is their problem? Why did they go here? That’s why I will never accept jurisdiction. Even if hell freezes over, I will not heed to their nonsense.)

In 2018, under threat of being sued at the ICC for the drug war killings, Duterte declared the Philippines’ withdrawal from the Rome Statute.

In an earlier ruling, the Supreme Court ruled that Duterte could not use the Philippines’ withdrawal from the Rome Statute to evade the ICC’s investigation of charges that he committed crimes against humanity in killing thousands in his brutal drug war.