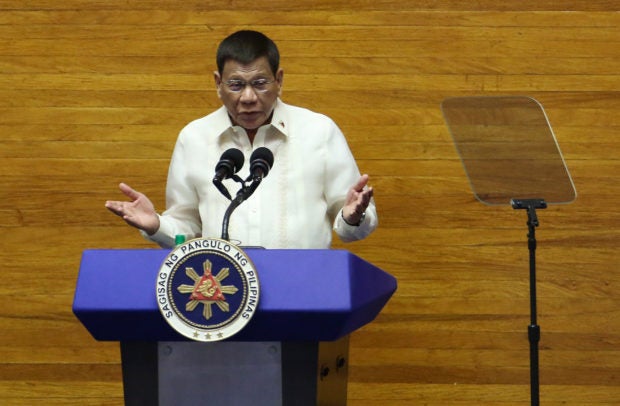 President Rodrigo Duterte gives his speech on his last State of the Nation Address at the House of Representatives in Quezon City on Monday, July 26, 2021.(File photo by NIÑO JESUS ORBETA / Philippine Daily Inquirer)

MANILA, Philippines — The Philippines’ signing of the Rome Statute, which established the International Criminal Court (ICC), has never been published in the Official Gazette and was, therefore, it never binding in the first place, President Rodrigo Duterte said on Thursday in a taped briefing on the COVID-19 situation in the country.

In 2018, under threat of being sued at the International Criminal Court for the drug war killings, Duterte declared the Philippines’ withdrawal from the Rome Statute.

“I did it just to impress upon everybody that there really was no law. When I withdrew, I was really withdrawing nothing, because until it [could be] established that there was publication [only] then it [would it become a] law,” he said.

The Supreme Court earlier ruled that Duterte could not invoke the Philippines’ withdrawal from the Rome Statute to skirt the investigation by the prosecutor of the ICC of charges that he committed crimes against humanity in the killings of thousands in his brutal drug war.

Malacañang has repeatedly said, however, that the government would not cooperate in the probe.