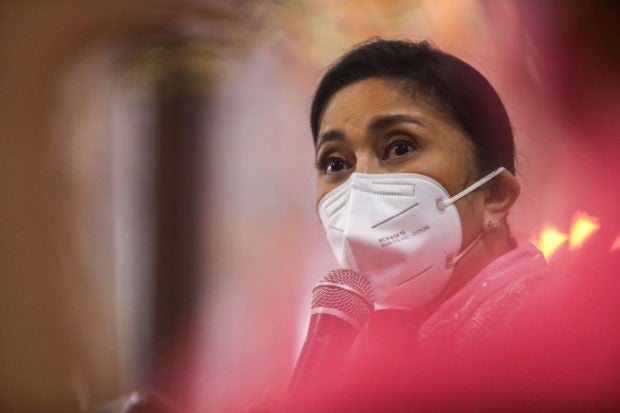 MANILA, Philippines — Vice President Leni Robredo has announced that she and her team would release a set of plans — formulated with the help of health experts and people on the ground — aimed at helping the country move past the COVID-19 pandemic.

Robredo said on Tuesday that she will be releasing the framework of the plan as her recent trips to various parts of the country like her visit to the Bicol Region the previous week really showed that the health crisis affected everyone.

(Tomorrow, we will release a video.  This is a framework of how we can be free from COVID, based on our discussions with experts, including epidemiologists, public health consultants, economists, and people from other sectors.)

(More importantly, we also formed our solutions from the actual experience of nurses, doctors, employees, and the Filipino people who have been enduring, sacrificing, and grieving during this pandemic.)

The Vice President, who is running for president in the 2022 national elections, also pleaded to her supporters to try helping people who have been affected by the pandemic in whatever way — from economic crises to getting infected, or even for people who lost loved ones to COVID-19.

(My call for you is as you wear pink tomorrow, please reach out to those who got sick, whose relatives died, and those who lost their jobs and livelihood due to COVID-19.  And the people had a hard time because of COVID-19.  Let us share in their challenges and understand the worries and uncertainty that bind us all.)

(Share the truth: If there is a clear strategy that would come out from taking care of people, we would be free from the pandemic.  For those who were with us during our office’s COVID-19 response, tell the stories: we are not just making plans based on promises only.  We have already proven that we can do it through a clean and orderly form of governance.)

Robredo’s supporters have launched a movement called “Pink Wednesdays”, where people who back the Vice President’s candidacy wear pink or share photos on social media adorned with the said color, in reference to the motif adopted for her campaign.

In the past, Robredo also lauded volunteers for helping set up feeding programs and assistance desks on her behalf, saying that these acts are a good way of being of service to people affected by the economic downturn.

READ: Robredo to supporters: ‘Pink’ must also be experienced, help others

However, her supporters have also come under fire for being elitist, and for being exclusive in their discussions with opposing camps on social media.  Robredo recently released reminders asking her supporters to calm down, saying that her campaign is rooted on inclusivity and not othering people who are not on their side.