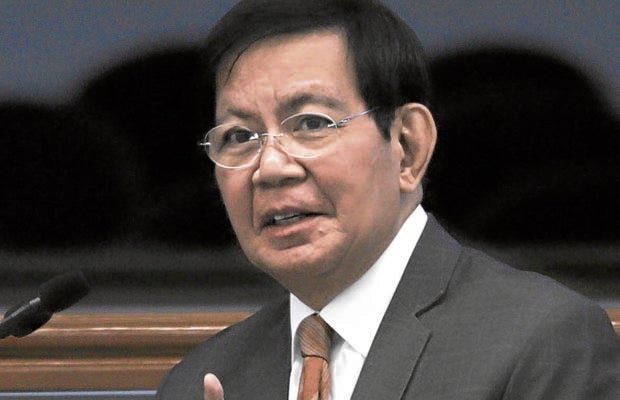 MANILA, Philippines — Presidential candidate Sen. Panfilo Lacson on Saturday night said the government “should encourage” mining in the country as long as firms are “responsible enough” in doing their business in the country.

“We should encourage …they are just lying underneath the ground,” Lacson said at the “Meet the Presidentiables” forum of Financial Executives Institute of the Philippines, referring to the untapped mineral wealth in the country.

Even if big mining companies manage their mining concessions with enough responsibility, small-scale mining remains underdeveloped because of corruption. Some small mining firms do not even pay the correct taxes. “So there goes the problem. Again, it involves corruption,” he said.

He said that if the government addressed corruption, “50 percent of the country’s problems will be gone” and pushed plans to digitize and automate government transactions to address the problem while renewing his proposal to exempt public officials from being covered by the Bank Secrecy Law, a proposal that has not passed Congress.

Lacson also favored entering in joint oil exploration deals so long as they complied with the constitutional requirements on ownership.

“If they adhere to the 60-40 provision when it comes to joint ventures, I’m all for it,” Lacson said.

“We are a very weak country militarily compared to China. The only way we can secure the area is through a balance of power … We rely on other countries as militarily strong as China,” he said.

He said the country should “seize the opportunity that other countries are also interested in securing the area,” citing the country’s alliance with the United States as “a potent weapon in our arsenal.”

Should he win the May elections, Lacson said he would suspend increases in oil taxes, but only as a “stop-gap measure” to address spikes in crude prices.

“There is no foregone revenue, but there is no increase anymore,” he said, noting that the Tax Reform for Acceleration and Inclusion law already authorized the Department of Finance to stop imposing more taxes on oil, he said.

“We can introduce some stop-gap measures in the meantime and let us see from there what we can do,” he said.

The national government should also “introduce some incentives for our transport sector” should oil prices continue to spike next year, he said.

“Our approach should be proactive, not reactive. We should rely on science driven by accurate data and not on pandemic politics,” he said. “These should be institutionalized at no cost to the people.”