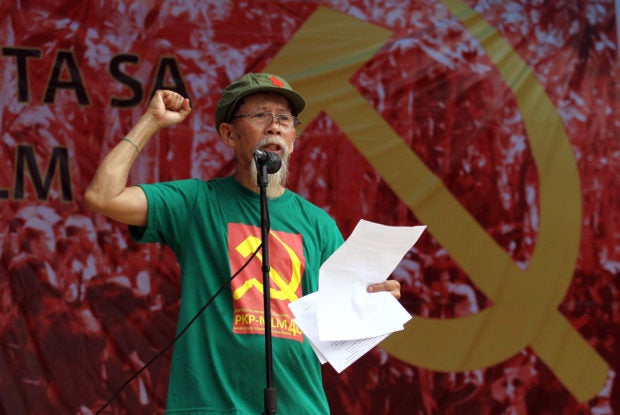 But photographs released by the military to confirm his identity showed the slain rebel leader noticeably clean-shaven.

Still, he had a distinct mole near his right ear that gave him away.

Madlos, 72, was one of two fatalities in an encounter around noon of Saturday between NPA rebels and government troops in the remote village of Dumalaguing in Impasugong town, Bukidnon province.

The death of Ka Oris, as Madlos is known to comrades, marks a turning point in the government’s campaign against the 53-year-old insurgency—or so the military seemed to suggest, as it emphasized his crucial role in the communist movement.

Brig. Gen. Ferdinand Barandon, chief of the 403rd Infantry Brigade, said Madlos was overseeing rebel operations in Impasugong when he and about 30 other rebels fired back at the advancing government troops.

“The [rebel] positions were fortified with APMs (antipersonnel mines), hence, we can assume at that time that they were protecting their top leadership,” he said.

“In order to protect our troops, we called for close air support and delivered airstrikes toward the [rebel] positions,” he added.

Following that assault, ground troops pushed back the rebels who later fled in their retreat.

The soldiers cleared the area and found two bodies with an M14 rifle, a KG9 rifle, ammunition and personal belongings scattered around them.

Madlos’ wife, Maria Malaya, in a statement to the media, however, refuted the military’s claim that there was an airstrike and a 30-minute gunfight between the rebels and government troops.

Malaya said Ka Oris and a medical aide left the town of Impasugong on a motorcycle at 8 p.m. last Friday when they were ambushed by soldiers before they reached the national highway. Both had gone out for Ka Oris’ regular medical checkup and were unarmed.

Brawner identified the other casualty as Eighfel dela Peña of the NPA’s National Operational Command (NOC).

Madlos was reported killed several times in the past only to turn up alive later. Brawner said the military would submit a sample of the slain rebel’s DNA for examination.

But Marco Valbuena, chief information officer of the Communist Party of the Philippines (CPP), said they were still verifying reports of Madlos’ death.

Madlos was a graduating agriculture engineering student at the Central Mindanao University when he joined the NPA in 1972, a week after the dictator Ferdinand Marcos declared martial law.

He spent 49 years in the movement, his last designations being spokesperson for the NOC and for the National Democratic Front (NDF) in Mindanao.

According to Barandon, Madlos was a high-ranking commander of the CPP-NPA “not only in Mindanao. He has command of the (CPP’s) regional committees nationwide.”

Brawner said: “We believe that with the death of Jorge Madlos we are going to see the start of the end of the NPA and the subsequent downfall of the CPP-NPA-NDF.”

He added that “Jorge Madlos is one of the few remaining senior leaders of the CPP-NPA and we believe that he is the one holding the NPA together.”

Col. Ramon Zagala, spokesperson for the Armed Forces of the Philippines, said Madlos’ “death will deter the activities and plans by the NPA for he can no longer direct the communist terrorists’ violent actions against our people.”

The military is now pursuing Madlos’ wife, also known as Myrna Sularte, secretary of the NPA’s North Eastern Mindanao regional committee, which makes her the highest-ranking rebel leader in the Caraga region, according to Brawner.

“I appeal to Sularte to surrender. It is futile to continue with the armed struggle,” he said.