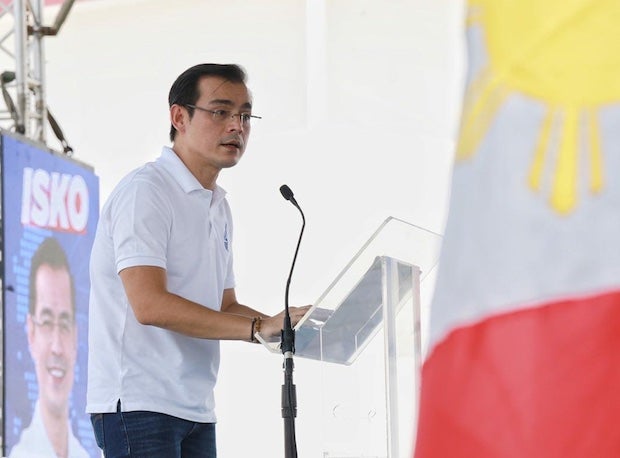 MANILA, Philippines — Manila Mayor Isko Moreno Domagoso on Saturday told Caloocan City residents that he is prepared for the presidency and the first thing that he will do as chief executive is the lowering by 50 percent the taxes that go with fuel and electricity.

Moreno said he is aware about the downside of his proposal which would mean a loss of P130 billion from the government’s income from taxes as pointed out by the Department of Finance.

Besides immediate savings for the household, Moreno said cutting taxes on electricity would also prevent manufacturers from shutting down, thus letting their employees keep their jobs and their livelihood.

“Ang bigger picture nyan: imagine the things that can be made by manufacturing, mga planta, they can sustain jobs. Instead of firing people, masu-sustain nila kasi ang laki ng savings nila,” Moreno said.

“Because yung cost of electricity, halos 50 percent nung buwis, na-save nila, then they can maintain whatever they have, how many employees they have,” he said.

“In fact, mas bababa yung power generation because one of the biggest sources to produce is utilizing crude or petroleum products. So, naturally nagti-trickle down siya. It’s common sense,” he said.

Towards the end of his speech, Moreno thanked Congressman Edgar Erice for inviting him and his vice presidential bet Dr. Willie Ong and three senatorial candidates to the consultation-dialogue which was well attended.

Moreno told the residents from North and South Caloocan that his senatorial ticket is easy to remember: Samira Gutoc, a Moro civic leader; Dr. Carl Balita, an educator and registered nurse; and Jopet Sison, who gives free legal assistance.

During a convention of local officials and volunteers in Caloocan City on Saturday, political leaders from the city’s second and third districts led by Caloocan 2nd District Rep. Edgar Erice and former Caloocan Mayor Enrico Echiverri expressed their support for Moreno’s presidential bid.

Erice is regional chairman of Aksyon Demokratiko for the National Capital Region. He is the party’s official candidate for mayor in Caloocan City. His candidate for vice mayor is PJ Malonzo.

Erice, a former Liberal Party stalwart, said the public should set aside conflicts among the country’s political parties and dynasties and choose a candidate whose performance is beyond these long-standing disputes.