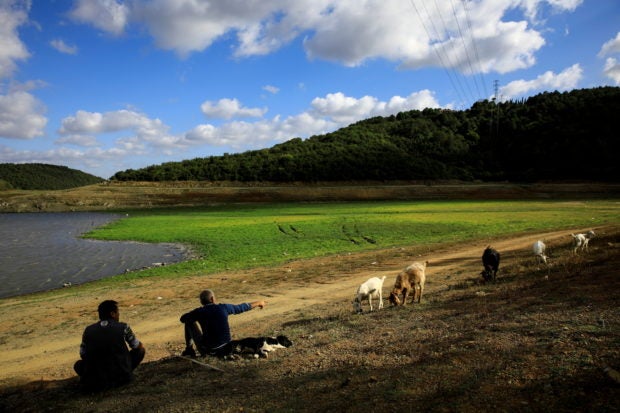 DIYARBAKIR, Turkey — Rain fell on Bicar Icli’s fields in southeastern Turkey for the first time in eight months last week, but he and other farmers are already counting the cost of a drought they blame on climate change.

Icli has not been able to plant his winter wheat crops due to the parched soils. Unless there is more rain in the coming weeks, he fears it will be too late.

“There is a serious problem here in my opinion, there is a much greater risk than in previous years,” said Icli, who has been working his fields in Diyarbakir province for five years.

As world leaders prepare to convene in Glasgow on Sunday for the U.N. COP26 climate summit, Icli’s woes highlight the problems facing farmers in Turkey and elsewhere due to extreme weather linked to climate change.

In an effort to limit their financial losses, Suleyman Iskenderoglu said he and other farmers were trying to make savings by skipping on fertilizer.

“How are we to produce under these conditions?” he said, as he looked over his sun-baked fields.

Besides the lingering drought, Turkey was hit by flash floods in its Black Sea region and massive wildfires in southern regions during the summer.

Environmentalists say climate change and aggressive farming methods have fueled the risk of water shortages, which surfaced in late 2020 as official data showed water levels at dams had fallen to record lows due to a lack of rainfall.

At Diyarbakir’s agricultural chamber, Chairman Abdulsamet Ucaman said farmers had seen their output fall by 60-70% this year from 2020.

“This has surpassed the level of concern, it is turning into a catastrophe,” he said.

“Turkey is not a water-rich country,” he said. “This data shows that our water potential, which we are already not rich in, will fall more in coming years.”

Earlier this month, Ankara became the last member of the G20 major economies to ratify the Paris climate accord.

Icli said he feared action to tackle carbon emissions in line with the agreement would be too late.

“Turkey signed the Paris climate agreement, but what will happen now?” he said. “We destroyed nature … so I don’t see the meaning of the climate accord after that.”