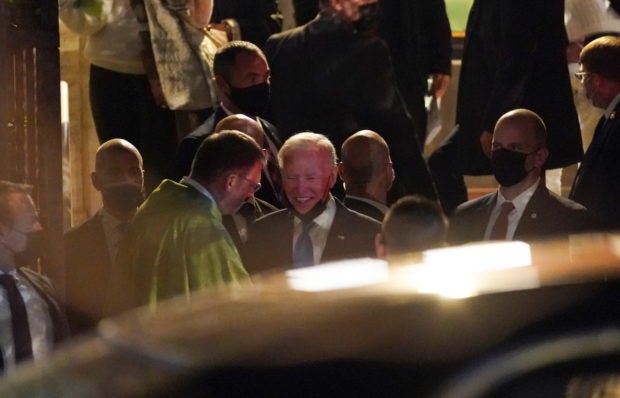 U.S. President Joe Biden speaks with a member of the clergy after attending St. Patrick’s Church during a break in the G20 summit in Rome, Italy, October 30, 2021. REUTERS

ROME — Joe Biden received communion while attending Mass on Saturday evening in the American church of Rome, a day after the U.S. president met Pope Francis and said later that the pontiff had told him he is a “good Catholic” who can receive the sacrament.

The Mass and Biden’s statement beforehand widened a gulf between Francis and conservative U.S. bishops who want to deny him the right to receive communion because of Biden’s support for abortion rights.

A person inside the church on Saturday told Reuters the president, who attended the Mass sitting in the back of the church with his wife Jill, received communion.

Biden regularly attends Mass and receives communion in Washington, where the local archbishop, Cardinal Wilton Gregory, has not made any moves to stop him.

Biden, the second Catholic U.S. president, has said he personally opposes to abortion but, as an elected official, cannot impose his views on others.

In Rome, where he was taking part in a summit of the G20 world’s richest nations, he attended the Mass at St. Patrick’s Church, near the U.S. Embassy.

Pope Francis is also the bishop of Rome, so Biden went to Mass and received communion in his archdiocese.

Catholics can attend Mass on Saturday night to fulfill their Sunday obligation.

Speaker of the House Nancy Pelosi, who is also Catholic, attended Mass in the same church earlier this month but had to leave early because of a security threat connected with people protesting in a nearby square against coronavirus vaccinations.

Pelosi goes to Mass in Washington but the archbishop in her home city of San Francisco, Salvatore Cordileone, has said public figures who support abortion should be denied communion in his archdiocese and has urged Catholics to pray for Pelosi’s “conversion of heart”.

Last month the pope, asked about the U.S. communion debate, told reporters abortion is “murder”, even soon after conception, but appeared to criticize U.S. bishops for dealing with the issue in a political rather than pastoral way.

“Communion is not a prize for the perfect,” the pope said. “Communion is a gift, the presence of Jesus and his Church.”

In June, a divided conference of U.S. Roman Catholic bishops voted to draft a statement on communion that some bishops say should specifically admonish Catholic politicians, including Biden. They take up the issue again next month.