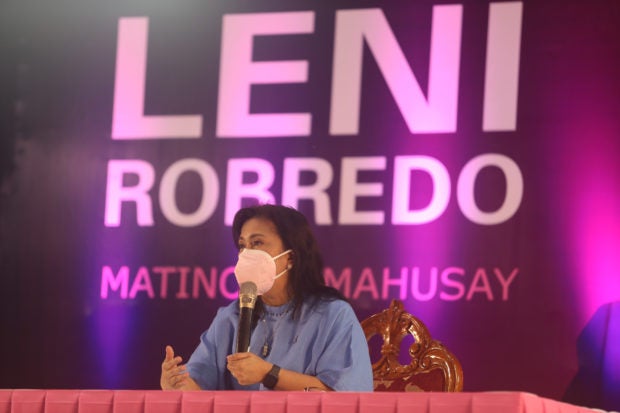 Vice President Leni Robredo discussed her platforms of governance and shared some of her proposals in addressing issues the country is facing today when she faced members of the media in a press conference held at the Sorsogon City Gymnasium in Sorsogon Province on Friday, October 29, 2021. (Photo by Charlie Villegas / OVP)

MANILA, Philippines — Another local chief executive — this time Mayor Noel Rosal of Legazpi City, Albay — vowed to support Vice President Leni Robredo’s presidential candidacy in the 2022 national elections, as she has supposedly shown resourcefulness in the face of adversity and low funding.

In a statement on Friday, Rosal said that he supports the candidacy of Robredo as she has shown what true leadership is about — finding a way to help her constituents even if resources appear so scarce.

“The time has come for us to be united in deciding  to elect our own leader — a leader who is humble in caring and governing.  She has shown that even when resources are scarce or even when there is none, if you are a true leader who is trusted and whose cause is for everyone’s welfare, then you are capable of achieving many things,” he said.

“During the pandemic, she has shown and even mobilized all sectors of our society whether rich, middle and even the poor that when we are all united and believe in the same cause, we can do everything for one another,” he added.

According to Rosal, the upcoming elections are very important as the chance to elect a leader who listens to the plight of the people — Robredo — may be a rare occasion.

“We should discern carefully because this might not come in our lifetime anymore. History will judge us that we failed our responsibility, not only as a Bicolano but as a Filipino, to elect a leader who listens, sympathizes and is concerned for everyone.

“She has shown that a leader who cares and is humble doesn’t need to have all the resources or money. What is important is that the people believe in you that you have good intentions.  So I am now openly asking all of us to be united not only for our family, not only for this generation but for our future generations,” he added.

Robredo has been in Bicol since Wednesday, moving from Camarines Sur, to Albay, and Sorsogon to implement some of her offices’ anti-poverty programs for the area.  Along the way, she also met with supporters and sectors who are supportive of her candidacy.

In a statement on Thursday, Ascutia said that he is picking Robredo and her running mate Senator Francis Pangilinan as they are good examples of ethical leadership in the country.

Lagman on the other hand highlighted that Pangilinan is the best running mate for Robredo, as Robredo’s good traits can also be found on the senator.

READ: In her return to Bicol, Robredo gets support from two more local execs

Aside from these officials, other politicians who also expressed support for Robredo include Muntinlupa Mayor Jaime Fresnedi, the Abueg siblings of Palawan, and Cagayan de Oro City Mayor Oscar Moreno.