‘No room for sloth’: Poe pushes for faster payout for drivers under service contracting program 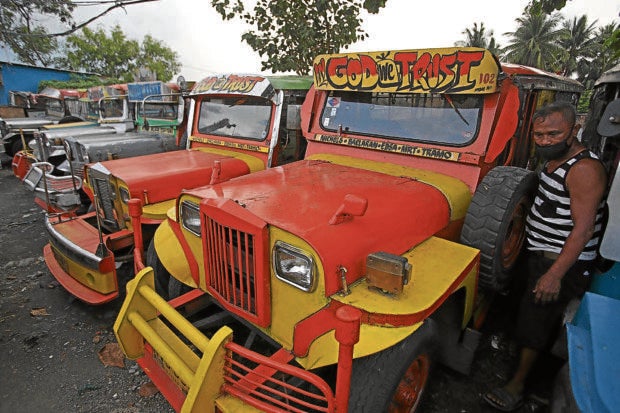 OLD RIDE The pandemic has sidelined jeepney drivers after public transport is restricted to contain the spread of COVID-19. — RICHARD A. REYES

MANILA, Philippines — Senator Grace Poe said Friday the national government should work faster to pay drivers of public utility vehicles (PUVs) under the service contracting program to aid them amid the rising prices of fuel.

Citing a statement released by the Land Transportation Franchising and Regulatory Board (LTFRB) on October 25, Poe said the agency has only released P539.6 million from September 13 to October 23 out of the P3.38 billion earmarked this year to settle unpaid incentives for drivers under the service contracting program.

Aside from the P3.38 billion budget recently allocated  to settle the unpaid incentives for drivers under the service contracting program, the LTFRB also reported that it has spent P2.289 billion out of the P5.58 billion from the program’s budget under the Bayanihan 2 which expired in June this year.

“We must put pedal to the metal in using the remaining billions under the program. There’s no room for sloth as our drivers struggle to find income and commuters jostle each other for the limited ride,” Poe said in a statement.

“The service has been rendered. The funds are available. The operators and drivers must be paid what’s due them,” she added.

Poe stressed the recent increases in the prices of fuel and its impact to drivers who are still suffering from the effects of the pandemic.

(Our countrymen in the transport sector are suffering due to the pandemic, the high prices of fuel and goods. We should not add to their struggles by making them wait for the payment for their services which they should have long received.)

The senator said the LTFRB should coordinate with the Land Bank of the Philippines to ensure proper crediting of the money to the payee drivers or operators without further delay.

Further, Poe noted that some organizations of bus drivers have said that payables to their members have reached P18 million at the minimum. She stressed that the government must give a definite response to the operators regarding the settling of the payables.

“We expect our disbursing agencies to act faster and see the urgency of settling their payables to the drivers and operators, who depend on this income for their livelihood. Bawat oras na lumilipas ay matagal na paghihintay sa gitna ng kanilang kakapusan,” Poe said.

(This is the real Catch 22—passengers are having a hard time commuting since vehicles are full. But the drivers do not have any incentive to go on the road due to the high prices of fuel.)