Comelec: Pacquiao cash handouts wrong, but not yet vote buying 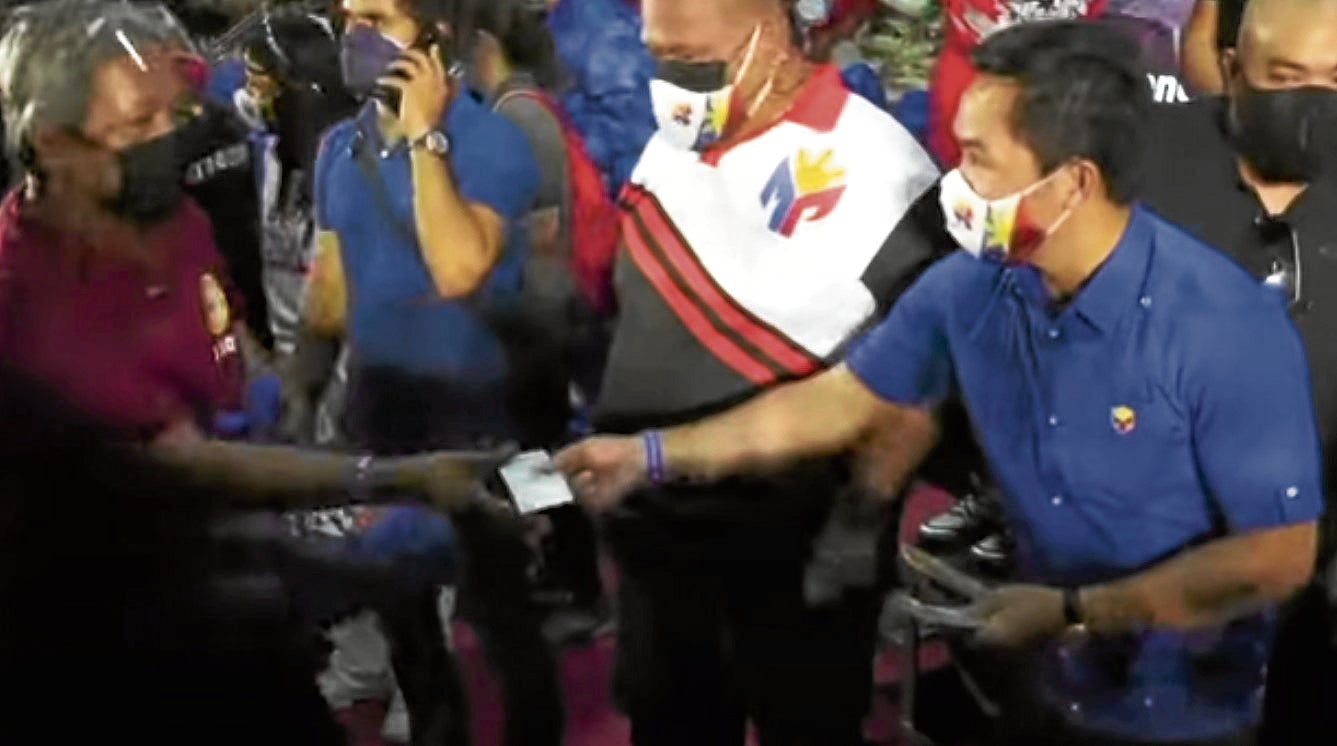 PERSONAL TOUCH A video grab released by the office of Sen. Manny Pacquiao shows the presidential aspirant handing out P1,000 in cash each to the people who showed up at a relief operation he conducted in Batangas province on Oct. 14, about a week after he filed his certificate of candidacy.

Presidential candidate Manny Pacquiao’s open distribution of cash to assorted groups is “wrong,” but the Commission on Elections (Comelec) is not considering it an election offense because the campaign period has not officially begun.

“We see something wrong with that, obviously, in the sense that we know that it’s going to impact how people think about the elections, how people are going to decide,” Comelec spokesperson James Jimenez said in a television interview on Thursday.

“But under the law,” he pointed out, “there’s not anything we can do about it because it is still not against the law. It is not yet considered vote buying.”

Should the billionaire senator continue giving out cash in his public events by Feb. 8, 2022, the official start of the campaign period for national candidates, “that would be vote-buying, absolutely,” Jimenez said.

While Pacquiao was giving away money in places he would visit, another presidential contender, Vice President Leni Robredo, advised voters to take the money offered by politicians but to vote according to their conscience—and was quickly rebuked by the Comelec in a tweet.

Vote buying is an election offense “regardless of financial situation or noble intentions,” Jimenez said.

Robredo was prompted to clarify that she was against the illegal practice of vote-buying and that she was talking about “realities on the ground.”

But now the Vice President is being accused on social media of actual vote-buying.

“Really? Me, of all people? (Ako pa talaga?)” an amused Robredo told reporters in Albay province, where she was making the rounds to thank her volunteers in her bailiwick.

According to the online posts, Robredo and her team tried to buy votes during the caravans backing her candidacy held nationwide last weekend. Her volunteers supposedly doled out food and cash with the request to the recipients that they vote for her in the 2022 elections.

Robredo shrugged off the claims, saying she, “of all people,” was being accused of vote-buying when “I don’t—and everybody knows this—even have money, and all the volunteers are doing this with their hands in their own pockets.”

She cited Solid Leni Bicol, the organization of volunteers that hosted her rounds in the region.

“I have not contributed a single peso to their efforts,” Robredo said. “And all over the country, name one group that has ever received money from us. If we can’t even help our volunteers, why on earth would we buy votes?”

Over the weekend, scores of volunteer groups held motorcades and caravans all over the country to kickstart the national campaign of Robredo and her running mate, Sen. Francis “Kiko” Pangilinan.

But photos of unknown origin surfaced online, accompanied by claims that Robredo’s volunteers had handed out food and money to bystanders for the purpose of buying votes for her.

Rival camps quickly used the allegations as a basis to criticize the so-called #Kakampinks, referring to the volunteers and Robredo’s campaign color of pink.

For Robredo, these posts are a “cheap shot” that is part of the broader, five-year “black propaganda” campaign waged against her by administration supporters in order to taint her character.

But she assured her supporters that her camp was taking these posts seriously. She mentioned legal groups that had volunteered to set up a system to report and take down fake news, and to mount legal action against the perpetrators if necessary

“As far as I know, all those reports alleging vote-buying to join the caravans have been collated already,” Robredo said. “But, at the same time, those who truly know me won’t buy this narrative.”