No victory declaration yet as COVID cases fall in PH 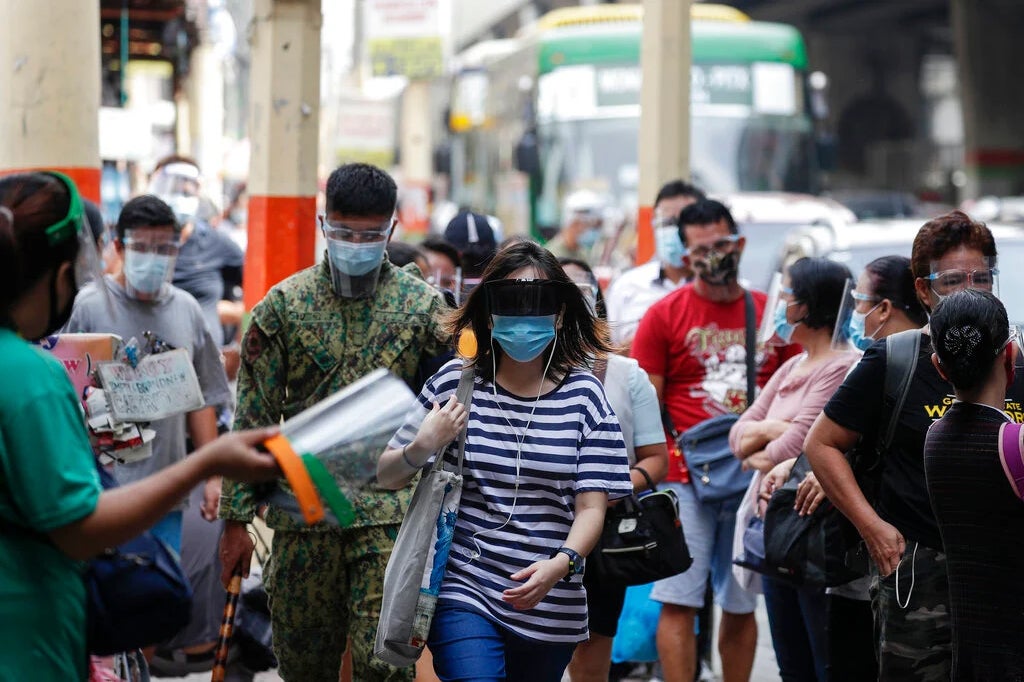 FILE PHOTO: People wear face mask and face shields to help curb the spread of COVID-19 as they walk along the streets in Quezon city, Philippines on Wednesday, Aug. 19, 2020. Philippine President Rodrigo Duterte has decided to ease a mild coronavirus lockdown in the capital and four outlying provinces to further reopen the country’s battered economy despite having the most reported infections in Southeast Asia. (AP Photo/Aaron Favila)

MANILA, Philippines—The number of daily coronavirus infections in the Philippines has been dropping dramatically over the past few weeks. While this could be good news, should it be taken as a sign of victory in the war on COVID-19?

In this report, we tried to look beyond the number of new COVID-19 cases to see whether the country is already winning its fight against the disease, which still has no known cure.

When the number of reported daily infections peaked last September, reaching an all-time high of 26,303—paired with then-increasing cases of the highly transmissible Delta variant—the Department of Health (DOH) had projected that the cases would peak again in October.

But last Oct. 11, the number of new cases dropped to 8,292. The figures have been going down since then. 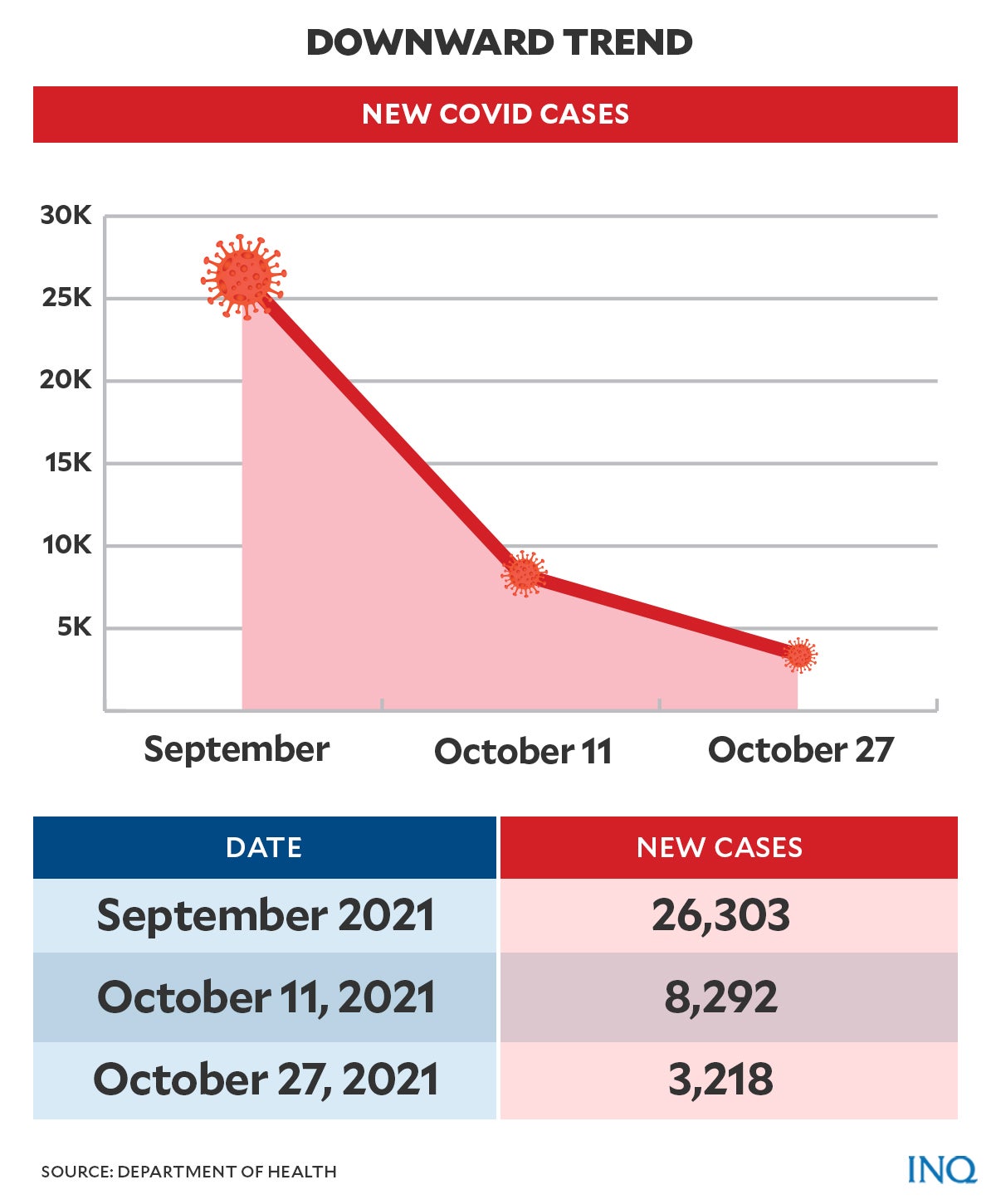 The number of active COVID-19 cases has also been dropping this month.

According to OCTA Research fellow Guido David, the seven-day average of new cases in the entire country from Oct. 20 to 26 likewise decreased to 4,848.

“Based on the current trends, cases could decrease to less than 2k by end of [November],” he added.

OCTA Research also saw a drop in the country’s COVID-19 reproduction number to 0.52. According to President Rodrigo Duterte, this was below the 1.00 deemed ideal by the World Health Organization (WHO).

Last week, David projected that the number of new COVID infections would decrease to the pre-Delta variant surge level by the end of October.

“Based on current trends, the country is tracking at less than 5k new cases (7-day average) by end of October with less than 1k in the NCR. This means we expect numbers to return to pre-Delta surge level by end of October,” said David.

The decreasing number of COVID-19 cases has eased the Philippines to low-risk status as of Oct. 25, according to DOH.

But despite the downtrend in daily infections, the Philippines has yet again landed on the bottom of the list of Bloomberg’s COVID Resilience Ranking report.

For the second consecutive month, the Philippines ranked last among 53 countries in the report with a score of 40.5—slightly higher than 40.2 in September.

Despite decreasing COVID-19 cases, the Philippines lagged behind its neighbor Southeast Asian countries due to its slow vaccine progress.

According to the Bloomberg report, the Philippines fared among “the worst on vaccine coverage” with only 26 percent of its population vaccinated.

In comparison, here are the number of people covered by vaccines in Asean countries on the list: 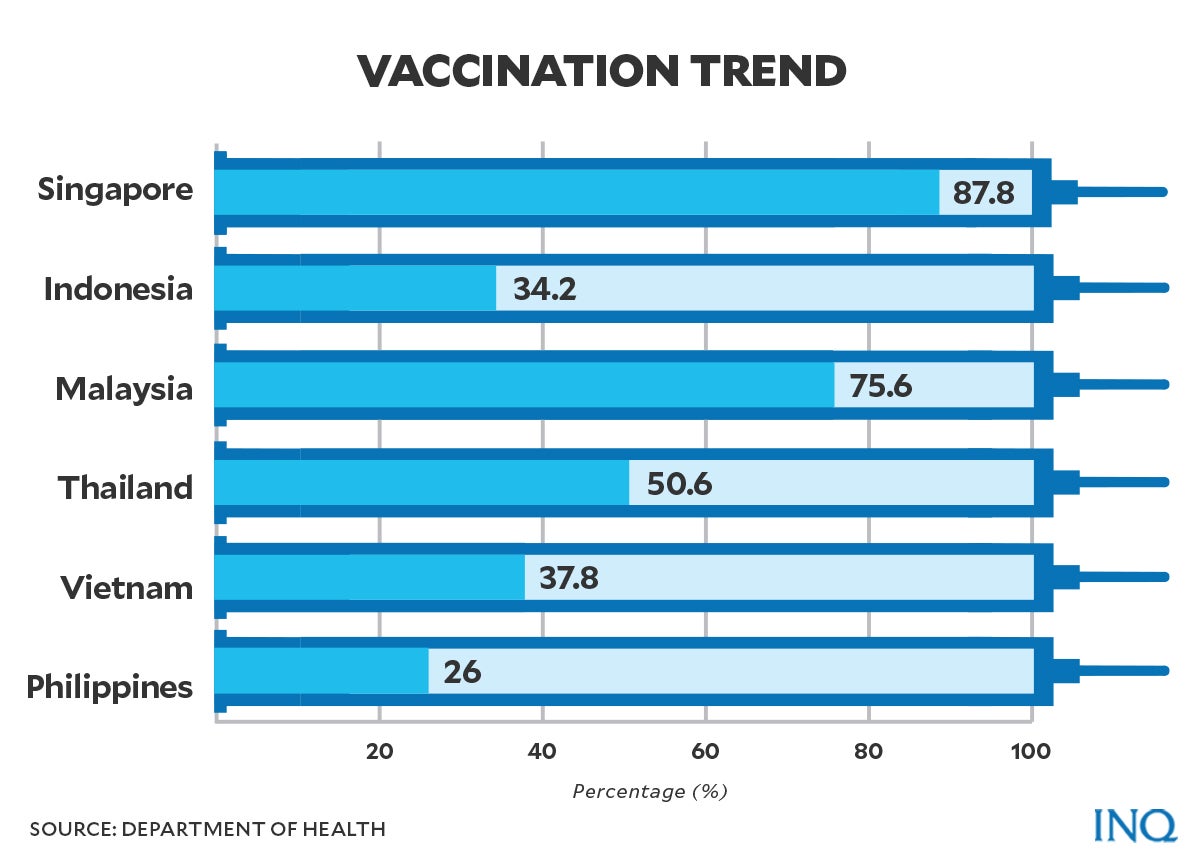 According to the group Bantay Bakuna, as of Oct. 23, the country has 94,678,340 total doses of the COVID-19 vaccine. The group said these doses could vaccinate at least 42.9 percent of the country’s total population, or about 47.3 million individuals.

If the seven-day average of 478,368 doses administered each day would remain consistent, the group said it would take seven months to achieve the government’s target of vaccinating 70 percent or 77 million people.

Amid slow progress, the government will soon begin its nationwide rollout of COVID vaccination for minors aged 12 to 17 years old.

Vaccine czar Carlito Galvez, a former armed forces chief of staff, said the National Vaccination Operations Center had told him the vaccination of minors could start as early as Nov. 3.

When Bloomberg released its report in September, Malacañang blamed the issue on vaccine shortage, which was also true in other Southeast Asian countries, according to presidential spokesperson Harry Roque.

“We are not surprised that the Philippines, together with other Southeast Asian countries such as Indonesia, Thailand, Malaysia, and Vietnam are at the bottom of the list, while countries which topped the list are developed countries such as Ireland, Spain, Netherlands, Finland and Denmark,” Roque had said in a statement.

“Vaccines are key towards defeating COVID -19,” he said.

“The Philippines is a classic case in point, where inoculation is highly dependent on the availability and stability of vaccine supplies,” he added.

READ: The cost of delayed vaccination

Although the Philippines had a lower number of deaths per one million people compared to Malaysia and Indonesia, David said the country’s high number of COVID fatalities remains “concerning.”

According to the Bloomberg report, deaths per million in Southeast Asian countries are: 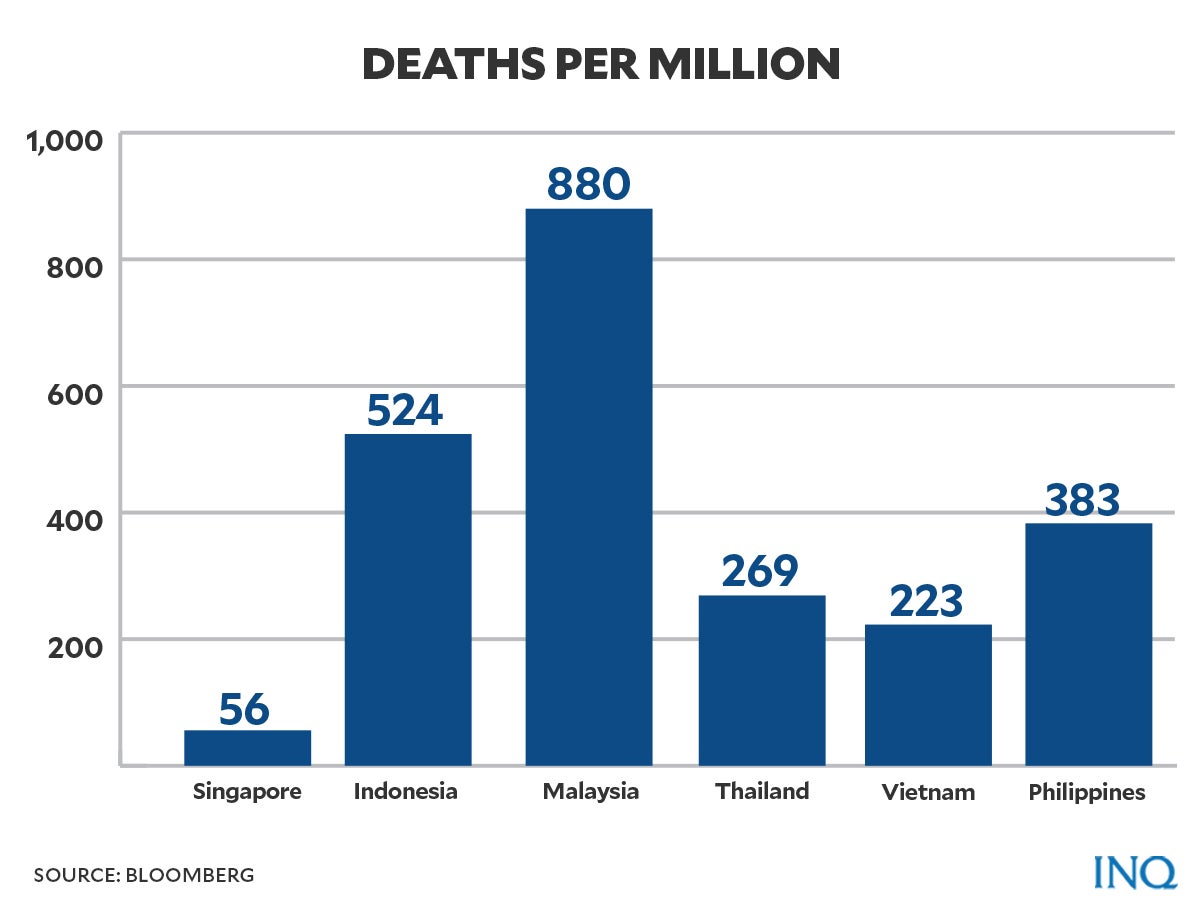 In August, the country had its highest COVID death toll since the pandemic started last year with 4,816 total deaths or at least 155 deaths per day.

It surpassed the previous record of 4,060 deaths in April.

In September, 3,893 people died of COVID, or an average of 144 per day. This made September the third deadliest month after surpassing the record in May with 3,842 recorded deaths or at least 124 deaths per day. 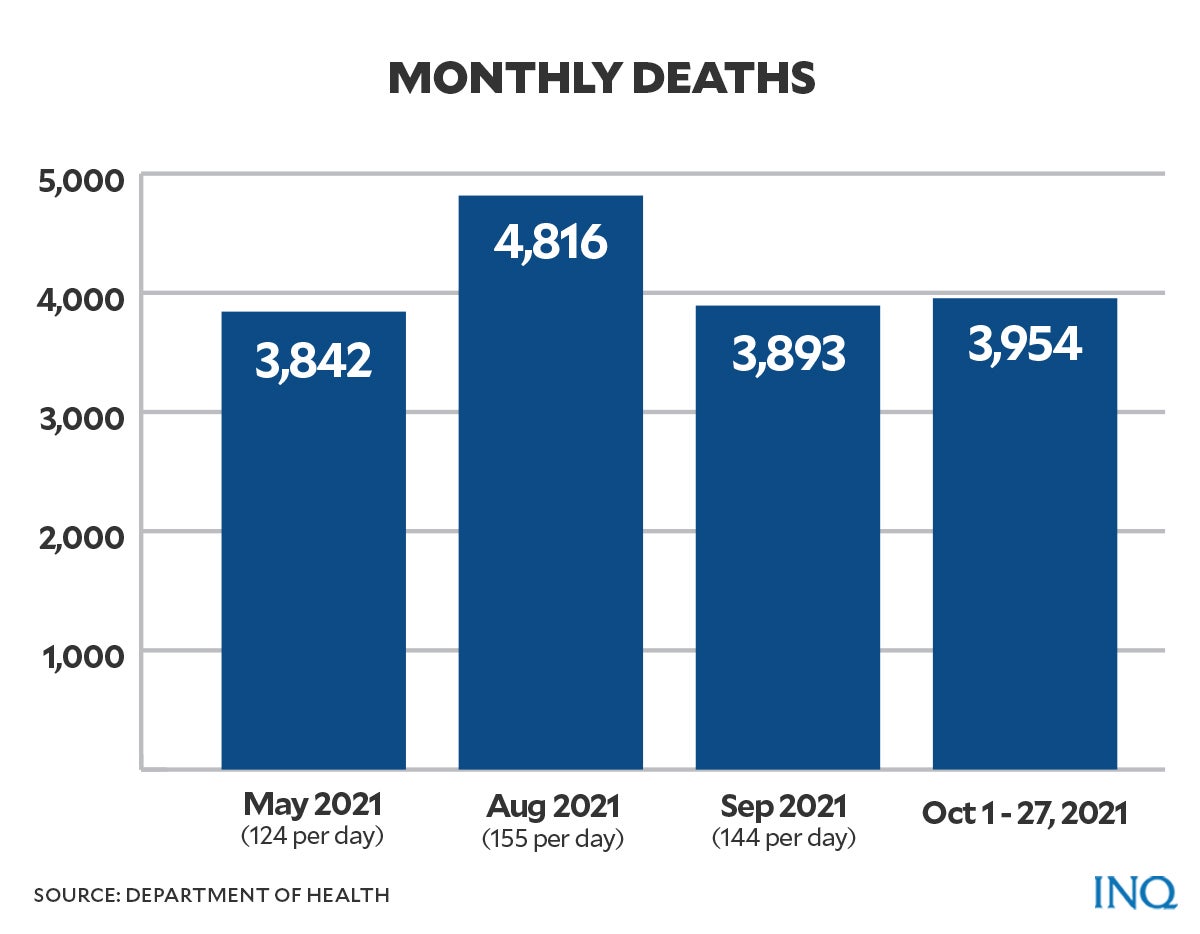 However, data from Oct. 1 to Oct. 27 showed that there are now a total of 3,954 deaths—which were already higher than the total fatalities recorded in September.

Although the Philippines is seeing a decline in the number of new COVID cases this month, the government has been reminding the public to not be complacent as the pandemic was far from over.

“Although the number of new COVID-19 cases reported in recent days has been declining, we should not be complacent,” the DOH reminded in its latest bulletin.

“Instead, let us continue to adhere to minimum public health standards and get vaccinated immediately,” it added.

However, in the past two weekends, many people failed to heed the DOH advisory and one case of that was driven by the government itself—overcrowding on Manila Bay’s controversial dolomite beach.

Over the weekend, reports said authorities have recorded over 4,000 individuals on portion of Manila Bay that had been covered with crushed dolomite rocks.

This was despite MMDA chair Benhur Abalos’ advice for people against overcrowding on the dolomite beach as it could lead to a superspreader, or a major source of infection, event.

Malacañang on Monday (Oct. 25) warned the public against overcrowding and law enforcers against negligence in the wake of people packing the dolomite beach.

“We are calling on the public to remember that we are still under a pandemic, even if our daily cases have started decreasing, COVID-19 is still present so we should not be complacent,” Roque said.

“We are also calling on the police in Manila, we need to enforce proper social distancing because the dolomite beach is for the enjoyment of everyone but we do not want it to be a source of a superspreader event,” he added.

“Just to keep them safe also, we would like to request that they take [pre]caution,” Antiporda said.

“They should go on self-quarantine, for now, to make sure that they did not contract any disease last Sunday,” he added.