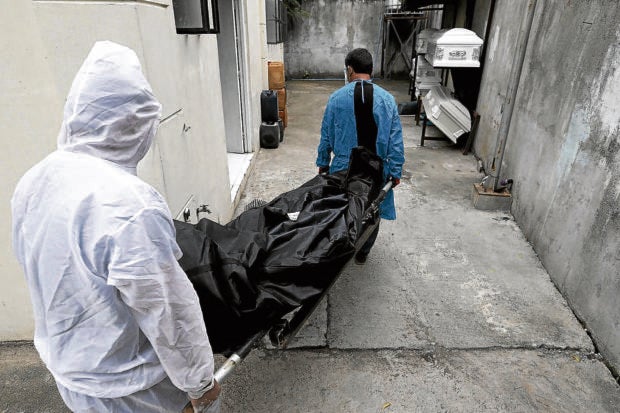 UNPRECEDENTED Workers are finding themselves busier than ever at New Life Crematorium in Biñan City in Laguna, where families who have lost loved ones to COVID-19 have to wait for at least two days to secure a slot. —RICHARD A. REYES (file photo)

MANILA, Philippines –An average of 155 people died each day in August due to the coronavirus disease, making it the worst month with the highest COVID-19 death toll of 4,816 since the pandemic started last year.

This surpassed the previous record of 4,060 deaths in April, or a daily average of 135 deaths. The third deadliest month was last May, when 3,842 people succumbed to COVID-19, or an average of 124 deaths a day.

According to data from the Department of Health (DOH), fatalities at the national level have been increasing since the last week of July.

COVID-19 cases and deaths increased by more than twofold this year compared to last year, she added.

However, the case fatality ratio, or the deaths among total cases, was lower at 1.47 percent compared to 2.47 percent last year.

The DOH maintained that the record death toll was not due to a failing healthcare system that had been overwhelmed with COVID-19 patients since August.

“We can’t directly attribute this to the lack of hospital [beds] and medicine because if we see the trend, the higher risk of dying is among the senior citizens and those with comorbidities,” Vergeire said. “The most plausible explanation for that is the number of deaths is increasing because the number of cases is also increasing.”

On Monday, the COVID-19 death toll climbed to 36,935 as the DOH reported 146 more deaths, including 53 people who were originally reported as recoveries.

More than 100 daily deaths have been reported for the ninth consecutive day.

Out of 71,770 who were tested on Sept. 18, 26.3 percent were confirmed positive for the virus. Five laboratories did not submit a report.

The DOH said at the national level and in some regions, the increase in cases had been slowing down. However, the country’s case classification and health system capacity remained at high risk.

“Cases may still continue to increase in the next weeks due to the higher transmissibility of the Delta variant,” Vergeire warned.

Of the 374 COVID-19 samples analyzed on Sunday, 85.3 percent were positive for the highly transmissible Delta variant.

Vergeire said more samples could be analyzed in the next sequencing run since the Philippine Genome Center staff would have ended their quarantine by then.

At the televised Laging Handa public briefing, Dr. Teodoro Herbosa, adviser to the National Task Force Against COVID-19, said the government was continuing to experience a slowdown in the rollout of vaccines in several areas of the country due to a shortage of vaccinators.

“Many of the vaccines that we ordered are starting to arrive. Supply is no longer the problem, the problem is that our doctors and nurses who are at the vaccination sites, they are also the doctors and nurses in hospitals. If the hospitals get filled up, or if hospital professionals are quarantined, they get pulled out from vaccination sites and sent back to hospitals with many cases,” he said.

Herbosa also disclosed that in some vaccination sites, some vaccinators got sick with COVID-19 and had to be quarantined.

He said the government was already addressing shortage of vaccinators by training nursing and medical students, as well as pharmacists and dentists, to administer shots.

He said the alert level system was also being used by countries such as Singapore and Australia, which declared that they had to “live or exist with COVID-19.”

“Through alert levels, it’s the people who will decide if they want to go to a place with a high risk of catching the disease. So when we are informed, it’s like during a typhoon, you don’t go to the river. If you leave near one, you evacuate when the water is rising to escape the flood,” he said.

He said granular lockdowns were also the better approach to controlling the spread of COVID-19 in Metro Manila after the DOH found out that only 11 percent of the geographic area of the National Capital Region (NCR) contained 80 percent of the cases.

He said the “hot spots,” once identified, could be subjected to granular lockdowns to contain the spread of disease while the rest of Metro Manila could continue with their economic activities.

On the estimate of OCTA Research team that the cases in Metro Manila might have already peaked, Herbosa said this seemed to match reports from directors of COVID-19 hospitals “that their patients are no longer coming from NCR but from neighboring provinces.”