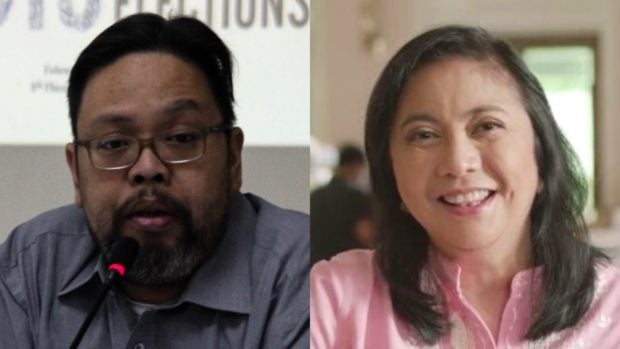 MANILA, Philippines — The Commission on Elections (Comelec) maintains that vote buying is an illegal act even if the person who accepts the bribe from candidates will vote according to what he or she deems right.

“I disagree with the notion of taking the money and voting according to your conscience,” Comelec spokesperson James Jimenez tweeted on Wednesday.

“Vote buying is an election offense regardless of financial situation or noble intentions. No one should do that and it should not be suggested to voters,” he added.

Jimenez’s tweet appeared aimed at Vice President Leni Robredo, who told her supporters on Tuesday that one may take money offered by politicians — because it could be taxpayer money, anyway — but vote based on one’s conscience.

Robredo, an independent presidential candidate, has since clarified her remarks that she said had been “taken out of context.”

She told a press conference in Naga City on Wednesday that she was against vote buying — “but looking at realities on the ground, it happens.”

She also said she was among those fighting the illegal practice.

“You can’t blame people who accept money because they’re struggling to make a living,” the Aksyon Demokratiko standard-bearer said in a statement on Wednesday.

“But Filipinos are smart. They know to distinguish between leaders who truly sympathize with them and those who are fake,” Domagoso said in Filipino.

“Politicians should not belittle people’s understanding. Filipinos are smart,” he said.

In a virtual meeting on Tuesday with “kasambahay” (domestic helpers) supportive of her candidacy, Robredo said they could take money from politicians so long as they voted according to their conscience.

She said vote buying was “definitely wrong, but as I always tell people, take the money. Take the money because that’s [taxpayer] money.”

Her remarks moved certain netizens to express concern that she was tolerant of vote buying, an election offense under the Omnibus Election Code.

On Wednesday, the vice president made it clear: “I do not condone vote buying.” But she underscored the wide gap between the law and its enforcement and said “our eyes should be open to the realities on the ground” where enforcement is lax and the chance of prosecution slim.

She cited her own experience filing vote buying charges against the Villafuertes, the dominant political family in Camarines Sur province, in 2013 when she was seeking a congressional seat.

She said she had “a lot of evidence that proved there was vote-buying,” but the case was eventually dismissed by the prosecutor.

“What we should be doing is that even if there are people who accept bribes, they should not vote for the person as if they owe them something,” Robredo said.

She said that was the context of her Tuesday remarks. “[But] what I am saying is that authorities should enforce the law well because the actual offenders in this crime go scot-free,” she added.

Robredo also said the people were under no obligation to vote for politicians dispensing money in exchange for votes.

She said there was “no way for anyone to know who you voted for, [so] don’t feel pressured into voting for that person.”

Vote buying is a rampant but “silent” practice especially in impoverished areas, mostly because law enforcement is weak and authorities very rarely go after the bribers themselves.

Robredo’s stance on vote buying is not exactly extraordinary.

Apart from Domagoso, yet another presidential candidate, Ferdinand Marcos Jr., has also encouraged people to take the money and to vote wisely.

Robredo was in Naga City to lead the inauguration of the headquarters of Solid Leni Bicol, a volunteer group and movement supportive of her candidacy.

Regarding the challenge of Sen. Manny Pacquiao to his fellow presidential candidates to engage in a face-to-face debate, Robredo said she was agreeable to it.

Pacquiao issued the challenge during his visit to Benguet province on Tuesday.

“I agree with Senator Pacquiao. A face-to-face debate is good. I am looking forward to that debate challenge,” the Vice President said.

She said it was not ideal for candidates to merely exchange statements on social media because important issues would not be clearly explained when individual opinions were aired all at the same time.

—WITH REPORTS FROM DONA Z. PAZZIBUGAN AND DJ YAP