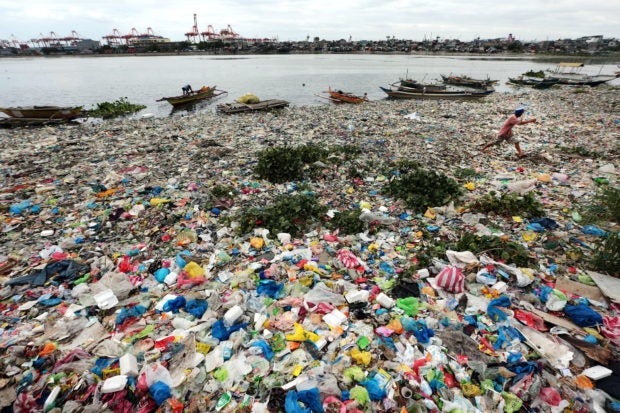 MAJOR POLLUTER The 2021 Oxford University’s Our World in Data report says about 80 percent of global ocean plastic comes from Asian rivers, and the Philippines accounts for a third of that. Plastic waste literally covers some of our coastal areas as can be seen in this January 2019 photo of the shores of Baseco in Tondo, Manila. —GRIG C. MONTEGRANDE

MANILA, Philippines — Climate and youth activists, fisherfolk, a former lawmaker, and environmentalists asked the Supreme Court on Wednesday to stop a “ticking ecological time bomb” by directing the government to take a major step in curbing plastic pollution, which it was supposed to have done 20 years ago, to prevent potentially irreversible damage to the environment.

In a petition, the group urged the court to issue a writ of kalikasan and a writ of continuing mandamus, citing government negligence that had allowed “the unabated emission of millions of tons of plastic waste into every nook and cranny of the Philippine archipelago.”

The writ of kalikasan is a legal remedy for persons or organizations whose constitutional right to a balanced and healthful ecology is being violated. The continuing mandamus would specifically compel the National Solid Waste Management Commission (NSWMC), to list banned plastic products.

Under Republic Act No. 9003, or the Ecological Solid Waste Management Act of 2000, the NSWMC was mandated to prepare a list of nonenvironmentally acceptable products and packaging (Neapp) within a year of the approval of the measure. It has not published the Neapp since the passage of the law, which was authored by then Sen. Sergio Osmeña III, one of the petitioners.

The petitioners also asked the high tribunal to issue a temporary environmental protection order to prohibit the manufacture, sale, distribution, and use of Neapp.

“After 20 years of thumb-twiddling, it has become abundantly clear that the respondents could not be bothered to avoid or diminish the threat of plastic pollution in line with the precautionary principle. Just as well, the future for the youth-petitioners who will be here long after older generations have passed remains bleak,” the petitioners said.

“To put an end to the runaway existential threat, the petitioners come seeking extraordinary relief so that their progeny—their generations yet unborn—may be given a fighting chance of being born at all into a world that is not drowning in plastic,” they said.

The petitioners asserted that the state must uphold its stewardship of the country’s ecology. The respondents’ inaction had caused direct injury due to plastic pollution like fishermen “catching less fish and more plastic” and constant and worsening floods, they said.

Undersecretary Benny Antiporda, spokesperson for the Department of Environment and Natural Resources (DENR), said that the implementing rules and regulations on the Neapp was being finalized.

The environmental group Ecowaste Coalition has been demanding that the NSWMC and DENR act more urgently, and was the first to seek the immediate release of the Neapp list.

Without the list, the prohibitions under RA 9003 cannot be imposed, particularly on manufacturers of plastic products.

“Had the respondents taken their mandate seriously, they would have, among other things, long ago prepared an effective list of Neapp and thereby enforced the statutory prohibition under the law,” according to the petition.

Several studies have already singled out the Philippines as the largest contributor to plastic emissions in the world, emitting over 356,371 metric tons of mismanaged plastic waste annually.

A 2015 report by international group Ocean Conservancy said the Philippines produces 2.7 million metric tons of plastic waste annually and was the third biggest marine plastic polluter in the world.

Global Alliance for Incinerator Alternatives reported in a 2019 study that the country disposes of 163 million plastic sachets and 45.2 million pieces of thin-film plastic bags daily.

Based on the 2020 Philippine brand audit by the environmental group Break Free from Plastic (BFFP), eight major companies engaged in manufacturing food, beverage, and personal care products have been the top plastics polluters in the country in the previous three years. The group’s analysis showed that the majority of the plastic trash collected in 2020 was from products by Universal Robina Corp., Nestlé, and Colgate-Palmolive.

In August this year, Nestlé Philippines reported the completion of its first year of “plastic neutrality” by collecting, coprocessing and diverting from the environment over 27,000 metric tons of plastic waste. This amount is slightly more than the plastic packaging that it had put out in the market over the past year.

A 2021 report by the Oxford University’s Our World in Data showed that approximately 80 percent of global ocean plastic comes from Asian rivers, and the Philippines alone contributes a third of that total.

The Pasig River alone provides up to 6.43 percent of ocean plastic originating from rivers, the report said.

The government’s own figures recognize that plastic waste accounts for 10.6 percent of all solid waste in the country and that it is set to “increase indefinitely.” Much of this is single-use plastics such as sachets and shopping bags.

These then flow into 4,280 rivers and into the ocean, where it has “exposed an uncountable number of humans and wildlife to hazards that will last for up to thousands of years in the environment,” the petitioners warned.

Alexandra Cousteau, an adviser to Oceana Philippines international, one of the petitioners, said that fears of ingesting plastics are “very real.”

“We now have microplastics not only polluting the ocean but falling from the sky in raindrops,” she said.

Oceana is the largest international organization advocating for ocean conservation.