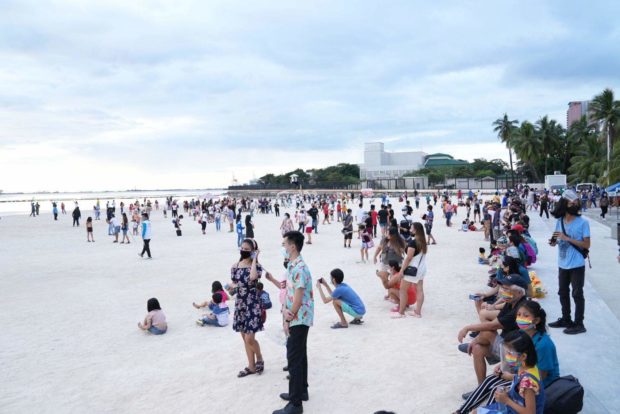 MANILA, Philippines — The ground commander of Manila Bay’s dolomite beach was relieved from his post following the crowding of visitors in the area, the Department of Environment and Natural Resources (DENR) announced on Wednesday.

Environment Secretary Roy Cimatu said Director Jacob Meimban Jr., who was relieved as the area’s ground commander, will be replaced by Reuel Sorilla, Director for the Environmental Law Enforcement and Protection Service.

“Being the commander, he takes full responsibility for what happened. While appreciating the gesture of that, kailangan imbestigahan pa din naman [we still need to investigate],” Cimatu told reporters in a press briefing.

Health protocols like social distancing were reportedly violated as thousands of local tourists flocked to the artificial beach  since it reopened to the public two weeks ago.

Some experts say the crowding in the area last Sunday alone could be a venue for super spreader events.

DENR Undersecretary Benny Antiporda said the agency admits the minor lapse that happened at the beach area but there were officers who immediately addressed the situation and enforced the minimum health standards.