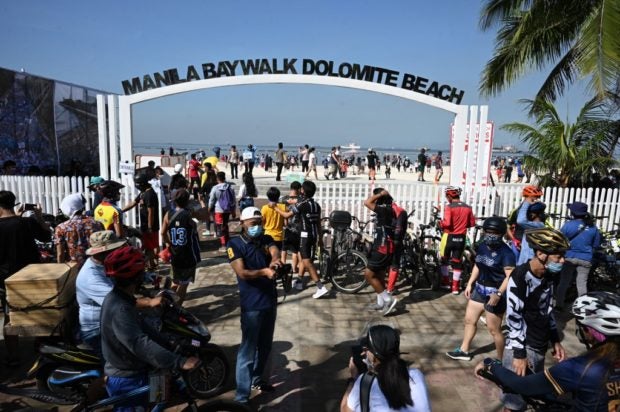 MANILA, Philippines — Manila City Mayor Francisco “Isko Moreno” Domagoso challenged the Inter-Agency Task Force for the Management of Emerging Infectious Diseases (IATF) on Tuesday to file charges against officials of the Department of Environment and Natural Resources (DENR) over incidents where people are seen overcrowding at the dolomite beach in Manila Bay.

Moreno said while Manila Bay is located in their city, jurisdiction of the dolomite beach is with the DENR due to the agency’s ongoing rehabilitation project in the area.

“Ang ironic kasi dyan, sila ang nagpapatupad, sila rin ang lumalabag tapos iisipin nila na susunod ang tao [It’s ironic because they are the ones supposed to implement (rules) yet they are the ones who violate (it) and they think the public would still follow them],” Moreno said in an interview with ABS-CBN News Channel.

“I’m challenging agencies of government under IATF to file charges in violation sa mga kapwa nila (against their fellow agencies in the) national government,” he added.

According to Moreno, due diligence must be observed especially when such events—such as the overcrowding at the dolomite beach—could serve as a superspreader amid the pandemic.

“If due diligence was done by DENR, in this case. I’m calling the IATF, to charge those people in DENR for violating our rules. If we cannot implement it within their offices, then there is no point to implementing sa mga taumbayan [implementing it to the public],” Moreno said.

(We are giving the public a hard time yet those violating are those in the national government.)

On Sunday, there were reports that authorities have recorded over 4,000 individuals at the dolomite beach — which sits on one section of the rehabilitated Manila Bay.

The DENR, however, said marshals had been deployed in the beach area to remind the visitors about the health protocols being imposed.

The dolomite beach, a project of the DENR, is being promoted as a possible tourist spot.