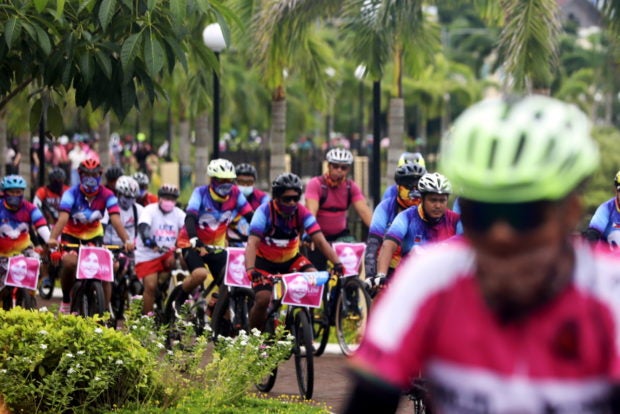 COLOR-COORDINATED Around 400 bikers in Iloilo City show up on Saturday for their version of the “people’s caravan” for Vice
President Leni Robredo and her bid to be the country’s next leader in the May 2022 elections. —ARNOLD ALMACEN/ILOILO CITY MAYOR’S OFFICE

MANILA, Philippines — Motorcades of various forms and sizes—but all tinged with pink—were held in about 25 provinces and cities on Saturday morning as a show of support for Vice President Leni Robredo and her quest to be the country’s next leader.

Volunteers collectively calling themselves on social media as “kakampinks’’ mounted what they called people’s caravans for Robredo as well as her running mate, Sen. Francis “Kiko” Pangilinan, who maintain that they are the “true opposition” in the May 2022 national elections.

In separate video messages posted on Facebook, Robredo and Pangilinan thanked the organizers for revving up “the beginning of a long journey” going into the polls. The official, 90-day campaign season for national candidates won’t start until Feb. 8 next year.

Boats and carabao, too

In Talisay City in Cebu, several fishermen joined the caravan in the water, adorning their boats with pink flags.

A carabao with a pink ribbon on its horns was also photographed in Sumilao, Bukidnon province.

Iloilo City Mayor Jerry Treñas, who on Friday pledged support for Robredo in a Facebook post, said on Saturday that his “most bike-friendly city cycled their support to a compassionate leader.’’

Sen. Risa Hontiveros, one of the 12 senatorial candidates in Robredo’s slate, joined about 450 bikers in this “Bike for Leni” event.

In Baguio City, a man sporting a “Leni” tattoo stood out in the crowd that cheered the hundred or so vehicles that joined the motorcade.

Anthoniuz Paulite, a florist, took off his shirt to reveal Robredo’s face tattooed on his back. He was part of the “pedestrian” contingent of Robredo supporters who lined the sidewalks of downtown Baguio, many of them wearing pink and purple flower garlands.

In Olongapo City, about 200 vehicles turned up for the caravan.

Gene Vincent Perez, who represents Lawyers For Leni (LFL), a subgroup within the Olongapo for Leni 2021 Coalition (OFLC), said their campaign started small on Tuesday but was soon overwhelmed by pledges of support.

In Pampanga, more than 800 vehicles drove through the City of San Fernando, the towns of Mexico and Magalang, and Angeles City.

Arnel Sicat, one of the organizers, said the participants were not allowed to stop or get out of their vehicles as part of the event’s safety and health protocols.

In Tarlac City, 800 vehicles motored around the city for three hours and were showered with pink confetti on F. Tañedo Street by business owners, said Jessie Abella of the Liberal Tarlac Madiskarte group.

About 200 vehicles also hit the road around the boundaries of Isabela and Cagayan.

In Quezon province, the intermittent rains and gloomy skies failed to stop the local pro-Robredo motorcade from covering the stretch of Maharlika Highway from Tiaong to Tagkawayan towns, said Jay Lim, media officer of the local group “QueLeni Tayo.”

Collection boxes and motorcycle helmets were passed around in Tagkawayan to receive donations for the “Piso for Leni” campaign.

In Oriental Mindoro, 14 vehicles took part in the motorcade dubbed #ArangkadaTRoPa Team Robredo-Pangilinan and organized by activist priest Fr. Edwin Gariguez. In Calapan City, more than 200 vehicles rolled out for the campaign.

In Bulan town in Sorsogon, 300 vehicles joined the caravan, while about 300 more turned up in Ligao City and Tiwi town, Albay.

In Iligan City, the roadshow of solidarity included street vendors, workers, business people, professionals and farmers. In Camiguin, a small group of fishermen did its part with a fluvial parade.

In Davao City, President Rodrigo Duterte’s hometown, where the locals are waiting to see whether his daughter, Mayor Sara Duterte, would change her mind and join the presidential derby, about 50 cars and motorcycles chose pink as their political color.

“Not all people in Davao City are DDS (Diehard Duterte Supporters),” said lawyer Romeo Cabarde Jr., one of the local Robredo supporters.