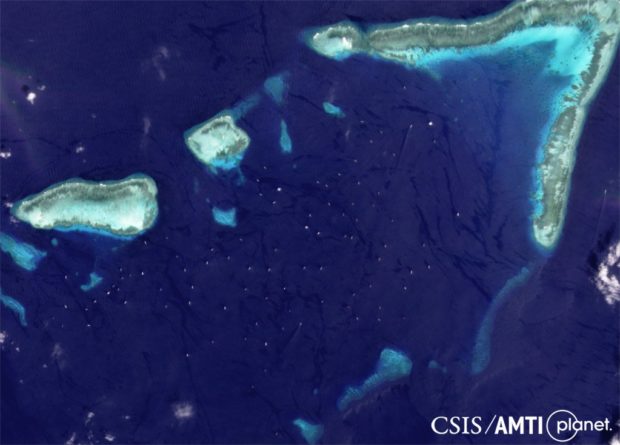 Now and then: over 150 vessels were visible at Union Banks on October 17, while only a handful were present on August 8. (ASIA MARITIME TRANSPARENCY INITIATIVE)

MANILA, Philippines — Chinese ships linger in the West Philippine Sea despite diplomatic protests filed by the Philippines, according to a Washington-based think tank.

“When international outcry or patrols by other claimants convince them to leave a disputed feature, they disperse to nearby reefs for a time. But their overall numbers in the Spratlys remain consistent,” the Asia Maritime Transparency Initiative (AMTI) of the Center for Strategic and International Studies said in its latest report released Saturday.

For instance, the number of Chinese militia vessels at Iroquois Reef dwindled after the Philippines filed diplomatic protests last Sept. 30.

The ships, however, only ended up at another area of the West Philippine Sea, part of the South China Sea which belongs to the Philippines.

“This is evidence of the Chinese militia’s shell game in the Spratlys Islands,” the AMTI said.

Iroquois Reef is located at the southern end of Recto (Reed) Bank, an area northeast of the Spratlys Islands believed to be rich in oil and gas, located some 125 nautical miles off the coast of Palawan.

According to satellite images analyzed by the AMTI, the Chinese boats first arrived at Iroquois Reef in mid-April, just after the 200 massed at Julian Felipe (Whitsun) Reef dispersed.

The reef is within the Philippines’ exclusive economic zone.

The AMTI said the Chinese ships at Iroquois Reef, which were 40 to 50 meters long, were no more than 5 through early June. It increased to 15 by June 15 and doubled to an average of 30 in late July.

The average number of vessels fell back to 15 in August before rising again to 30 in late September, it said.

The AMTI noted a drop of Chinese ships after the Sept. 30 diplomatic protest: 35 vessels visible in satellite imagery on Oct. 2 but only 5 were present by Oct. 17.

The ships on Pagkakaisa Banks, which include Julian Felipe Reef, have increased in the past three months, the AMTI said. Most of the ships were Chinese but Vietnamese coast guard and fishing boats were also spotted.

Satellite imagery showed an average of 40 vessels visible in the northern half of Pagkakaisa Banks in August. By September, over 100 boats were spotted. It was more than 150 by October 17.

“In comparison to the massing at Whitsun Reef in March, these vessels are spread more evenly throughout the northern half of Union Banks, with relatively few at Whitsun itself,” the AMTI said.

The nature of Chinese militia vessels is quite tricky.

Most pose as fishing vessels, but are not actually into fishing. Militias are being used to aggressively enforce China’s territorial claims in the South China Sea, including West Philippine Sea, without sparking overt war.

Formally, they are part of China’s armed forces.

The Philippines has increased its patrols in the West Philippine Sea early this year in response to the Chinese incursions.

The presence of Philippine ships, however, is nowhere near the scale of China’s deployment and almost-permanent presence of its coast guard and militia.

“China’s strategy is to wear other countries down by sheer numbers, strength, and staying power. It wants other countries to simply relent and accept Chinese power as inevitable and unstoppable; hence what it is doing is a form of imposition and coercion,” Dr. Jay Batongbacal, director of the Institute for Maritime Affairs and Law of the Sea, told Inquirer.net.

A total of 153 out of 211 diplomatic protests filed by the Philippines in the last five years were filed in 2021 alone, according to a recent statement of the Department of Foreign Affairs.

“The Philippines filed another protest on October 20, this time about Chinese vessels challenging its patrol ships in the Spratlys with horns, sirens, and radio communications. If this massing of militia vessels at Union Banks continues, more diplomatic protests are likely to follow,” the AMTI said.

Batongbacal said that aside from filing diplomatic protests, the Philippines could also work together with other nations to expose and reject China’s aggressive actions in the West Philippine Sea.

“Diplomatic protests alone will not make them leave; protests serve to clearly establish and document the country’s legal and political position,” he said.

“The Philippines should continue to document China’s activities in the West Philippine Sea, day after day, year after year. But more than protests, it should also take other actions in concert with other nations to shine a light upon and clearly reject China’s behavior,” he went on.

An example of action that the Philippines could take would be calling out China’s illegal, unreported and unregulated fishing (IUUF) activities within the EEZ of other countries in all available international forums, Batongbacal said.

Another is to continually show the world China’s IUUF and maritime militia activities. The Philippines can also begin talks with other countries to closely monitor and exchange info and expose Chinese maritime activities that damage and overexploit the marine environment, he said.

China claims almost the entire South China Sea through its nine-dash line, although the Hague-based Permanent Court of Arbitration has ruled against it.

President Rodrigo Duterte has downplayed China’s aggressive behavior in the West Philippine Sea in attempts to pursue friendly ties with Beijing for economic investments and loans.