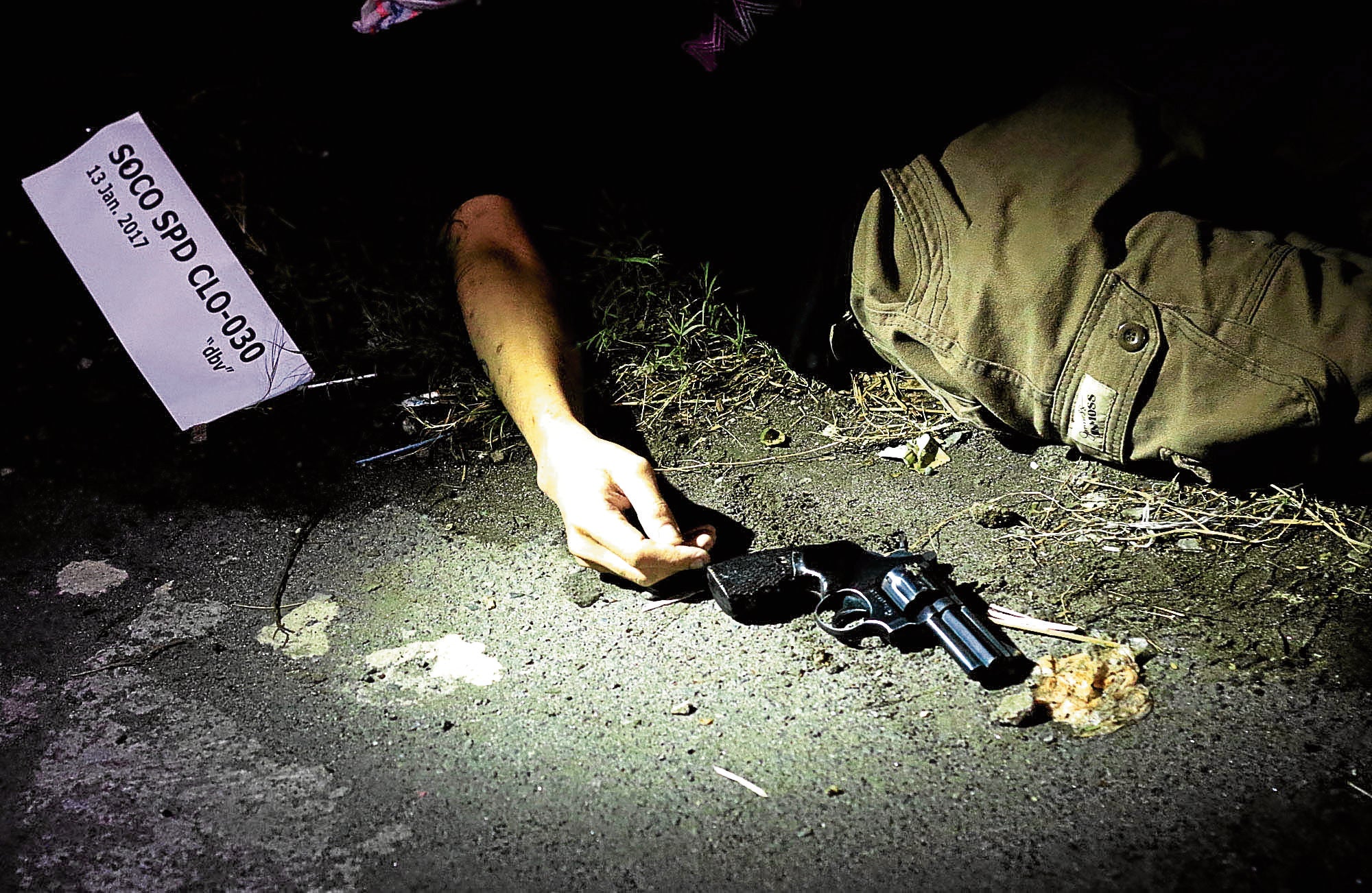 ‘MIXED BAG’ In its case summary, the Department of Justice counted 58 victims, not all of them drug suspects, killed between late 2016 and September 2020. —INQUIRER FILE PHOTO / RICHARD A. REYES

The teenager was shot thrice; a paraffin test showed that he had not fired a gun. The Philippine National Police Internal Affairs Section (PNP-IAS) found that “excessive force appeared to have been used by the police operatives.”

Despite the findings, all the policemen were cleared of administrative liability except for one—presumably the officer that fired the gun, who was suspended for 60 days.

Alcantara’s death is among the 52 cases of summary killings under President Duterte’s “war on drugs” that the Department of Justice (DOJ) wants to reopen, to press criminal charges against the policemen involved.

According to the case summary released by the DOJ on Wednesday, there were 58 victims, not all of them drug suspects, who were killed between late 2016 and September 2020.

Rights and legal groups noted patterns of police abuse and impunity in the case summary, and called on the DOJ and the PNP to conduct a full, good-faith investigation of the thousands of killings under the drug war.

The PNP chief, Gen. Guillermo Eleazar, welcomed the release of the case summary, but did not address the issue of why criminal charges were not filed against the erring cops. Instead, he promised cooperation with the case buildup being conducted by the National Bureau of Investigation and the PNP itself.

The New York-based Human Rights Watch (HRW) observed that the penalties for the erring policemen were “remarkably light.” In most of the cases reviewed, the cops got off with suspension ranging from 22 days to six months.

There were about 12 instances of demotion; nine, dismissal from service; and one, a mere reprimand.

The DOJ named the victims but not the policemen involved.

Justice Undersecretary Adrian Sugay said some of the 52 cases had been filed in court and some investigated at the prosecutor’s level.

“Some actually involve cases that have undergone preliminary investigation and are even with a trial court, such as the killing of Carl Arnaiz,” Sugay said.

Two junior cops executed Arnaiz, 19, in Caloocan City on Aug. 18, 2017, after accusing him of robbing a cabbie.

Per the DOJ case summary, the two cops were meted a 50-day suspension despite the PNP-IAS finding that they had deliberately killed Arnaiz, who was shot five times in the chest.

“The execution-style killing of [Arnaiz], as narrated by the taxi driver who was the robbery victim, was attested to by another eyewitness… who positively identified the respondents as the perpetrators,” the DOJ said, quoting the PNP-IAS finding.

“The fact of intentional killing was confirmed by the physical evidence and the findings of the medicolegal officers from the Public Attorney’s Office. The police operatives were found to have employed excessive force and violence,” the DOJ added.

According to Sugay, Police Officers 1 Jeffrey Perez and Ricky Arquilita, who were charged at the Regional Trial Court of Caloocan City Branch 122, are still at large.

The Inquirer reported earlier that Arquilita and Perez were arrested in 2018. Perez is still in the custody of the Valenzuela city jail; Arquilita died in 2019 after contracting illnesses behind bars.

Sugay said the NBI would cross-check the status of the 52 cases with its records.

“The list of 52 cases submitted to us by PNP and PNP-IAS is a mixed bag. They simply gave us cases that, upon verification, involve findings of administrative liability done by the investigative arm of PNP-IAS,” he said.

The DOJ case summary showed that in many cases, the policemen could not support their claim that the victims had fired first, whether through paraffin or ballistics tests or an autopsy, and the victims were shot multiple times.

The case review was part of the DOJ’s promise to the UN Human Rights Council that it would look into alleged abuses in the conduct of the drug war now being investigated by the International Criminal Court (ICC) for possible crimes against humanity.

HRW senior researcher Carlos Conde said the case summary “indicated a disregard for procedures, perhaps an intent to cover up what happened.”

Several of the cases occurred in southern Luzon (Cavite, Laguna, Batangas, Rizal), considered among the deadliest hot spots of the drug war.

Conde welcomed the DOJ’s move to make the cases public. But he pointed out that the review of 52 of the thousands killed in the drug war “hardly qualifies” as compliance with its promise to the UN.

For National Union of Peoples’ Lawyers president Edre Olalia, the “paltry number and the inordinate lateness” of the review showed that the DOJ was merely “going through the motions.”

Among Malacañang’s defenses in resisting the ICC probe is that the Philippine domestic mechanisms are working, and that drug war suspects are being prosecuted under the criminal justice system. (See related story on Page A4.)

But the case summary showed that the review was a “last-ditch effort to hide the fact that our system is unwilling and unable to sufficiently investigate and prosecute crimes against humanity,” said the legal group Ideals, one of the organizations that had offered assistance to drug war victims since 2016.

Conde agreed, saying: “Based on these 52 cases alone, it is clear that the drug war is an illegal, murderous state policy being carried out by a police force that has been commanded by the President himself to disregard due process. These violations are not, by any stretch of the imagination, the conduct of ‘a few bad eggs’ in the PNP.”

House Deputy Minority Leader and Bayan Muna Rep. Carlos Zarate said that with the DOJ findings, it now “behooves Congress” to conduct an inquiry into the extrajudicial killings for which he had filed “so many resolutions” that were ignored.

Zarate said reforms should involve, not only the internal policies of the PNP, but also existing laws that should be strengthened or changed to deter further abuse and lapses.

“These findings are a challenge to the House leadership to conduct hearings for oversight and in aid of legislation,”he said.

For Bayan Muna chair and senatorial candidate Neri Colmenares, the DOJ findings were “damning, but not at all surprising.”

“One death is simply too much, and these 52 deaths show a grim image of irregularities. This information confirms what we already know of the PNP’s abuse of power in conducting operations under Duterte’s brutal drug war. But more importantly, the 52 cases, and there are definitely more, only show that the drug war is not the success the Duterte administration paints it to be,” Colmenares said in a statement.

Eleazar said the PNP, through the interior department, had been cooperating with the DOJ review.

“We defer to our secretaries on what decisions they will make regarding these cases in the interest of truth, transparency and justice,” he said.

It took more than three months for the DOJ to release the results of its review. Both Eleazar and Guevarra hedged on who would release the case folders, saying it needed the President’s clearance.

With the opening of information on the cases reviewed, Eleazar urged the victims’ families to “submit their complaint-affidavits, or present witnesses to make the criminal cases to be filed against them by the courts stronger.”

“I assure the public of the PNP’s full cooperation with the NBI. There will be no cover-ups and we will make everyone involved accountable,” he said. —With reports from Dexter Cabalza and Julie M. Aurelio