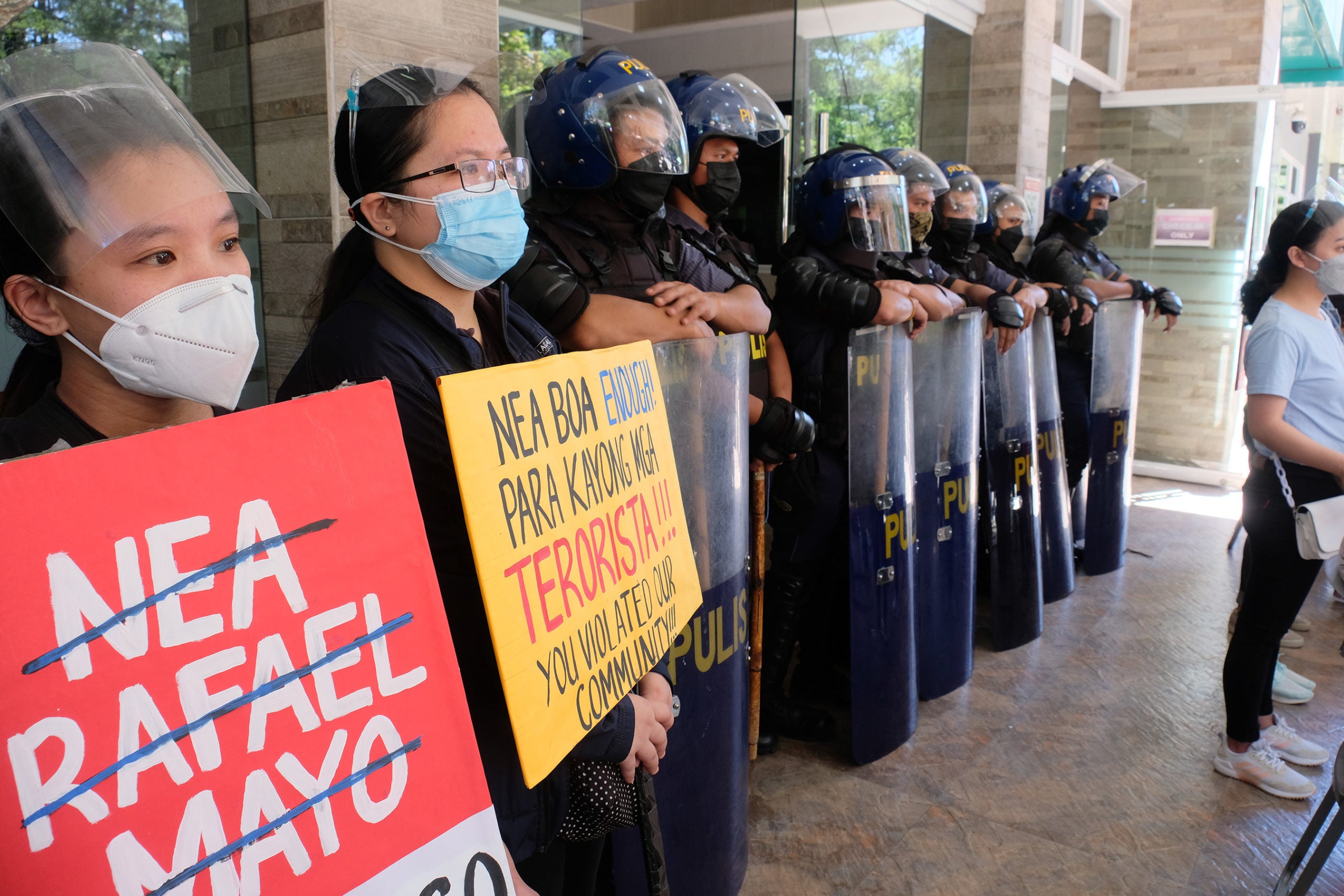 DEFIANCE Employees and members-consumers of the Benguet Electric Cooperative on Wednesday join a protest rally to retake the utility’s offices in Baguio City two days after its takeover by the National Electrification Administration and policemen. —NEIL CLARK ONGCHANGCO/CONTRIBUTOR

BAGUIO CITY—Officers and employees of the Benguet Electric Cooperative (Beneco) took back their headquarters on Wednesday, two days after it was forcibly taken over by policemen deputized by the National Electrification Administration (NEA).

Around 50 policemen broke into the Beneco offices on South Drive here to provide access for lawyers Omar Mayo and Ana Maria Paz Rafael Banaag. Mayo was NEA’s designated caretaker of the power utility while Banaag, a former Malacañang communications official, was endorsed as the general manager.

Both Mayo and Banaag were not around when more than a hundred protesters representing the Beneco Employees Labor Union (Belu) and Beneco members-consumers marched to the utility’s headquarters at 9 a.m.

Banaag, a former assistant secretary at the Presidential Communications Operations Office, was appointed general manager in August despite protests over her alleged ineligibility. That position was held by Melchor Licoben, who was promoted in 2020 from deputy manager by the Beneco board following a succession process.

Beneco consumers had organized an “Occupy Beneco’’ activity to peacefully take back the utility’s offices.

The police tried to stop the protesters but they relented after a surge of people managed to enter the Beneco building.

Licoben ordered an inventory of documents and equipment as soon as the employees secured the building. Initial reports indicated that duplicate keys of Beneco vehicles and a component of its security camera system were missing.

Beneco lawyer Delmar Cariño said they would pursue charges against the NEA for the Monday takeover, adding to several lawsuits already pending in various courts against Banaag and the NEA board composed of Energy Undersecretary Emmanuel Juaneza, Alipio Badelles, Agustin Maddatu and Rene Gonzales.

But Mayo, in a telephone interview, said: “The rule of the mob prevailed.”

He said he was in Beneco’s office in La Trinidad, Benguet, when Licoben and the employees entered the Beneco building on South Drive here.

Mayo said he had informed the NEA board about what happened and was waiting for instructions.

The city council earlier summoned Mayo, the Cordillera police and the National Bureau of Investigation to an inquiry it will launch on Oct. 25. NBI agents were seen securing Banaag in September.

On Tuesday, the so-called power bloc at the House of Representatives had asked Philippine National Police chief Gen. Guillermo Eleazar and Interior Secretary Eduardo Año to investigate why Cordillera policemen were used to break into a power utility without a valid court order.

“The role of the PNP shall be limited to the maintenance of peace and order, crowd control and the security of [a court sheriff] or the equivalent officer of a quasi-judicial or administrative body,” according to an Oct. 19 letter from Representatives Presley de Jesus (Philreca), Adriano Ebcas (Ako Padayon), Sergio Dagooc (Apec) and Godofredo Guya (Recodoba).

Mayor Benjamin Magalong said he discouraged the Army from intervening after the NEA asked the military to augment the police force securing the Beneco building.

Licoben said Beneco started restoring its services starting Wednesday as he apologized for the “slowdown” in their response time for repairs and other emergencies since Mayo took control of Beneco.

Shortly after learning about the takeover, Beneco employees staged a sit-down protest on Monday when they were prevented from entering their offices. Some Beneco employees resumed their duties on Tuesday but they performed their tasks through a work-from-home arrangement.

Belu has consulted its lawyers about pursuing legal action against the NEA, believing that employees were its targets of retaliation for defying the agency, said Belu president Jefferd Monang.

Some employees complained that they had been under surveillance while union officials were summoned by the NEA and four Beneco directors who supported the regulator to explain their alleged insubordination, said Mark Anthony Amisola, Belu vice president.

Belu may also sue the NEA or Mayo for recruiting new workers to fill up supervisory and rank-and-file positions, apparently to replace more than 200 Beneco employees.

Nathaniel Lacambra, director of the Department of Labor and Employment in Cordillera, said he would investigate the incident.

Lacambra said employees must not be terminated or replaced unilaterally, especially if they were caught in the middle of a leadership feud and did not know who to follow.