Senate to probe BSP on auditing accounts of PEP 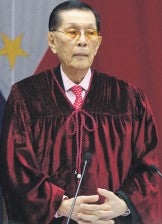 Revelations in the impeachment trial of Chief Justice Renato Corona have prompted the Senate to inquire into the central bank’s power to audit accounts of a politically exposed person (PEP), fearing this practice in totalitarian regimes infringed on the Filipino’s basic right to privacy.

Senate President Juan Ponce Enrile and other senators on Wednesday moved for the committee on banks to look into the power of Bangko Sentral ng Pilipinas (BSP) to classify people as PEP and audit PEP’s accounts.

“If it’s true that they accessed somebody’s account without complying with the requirements of the law, why should we tolerate that? The people are involved; deposits are involved; our banking system is involved,” Enrile said on the floor.

“This is a serious matter. Only totalitarian countries can look into the private affairs of people. We’re not, we’re a democratic country,” he added during a plenary interpellation on bills amending the Anti-Money Laundering Act presided by Senator Loren Legarda.

On Monday, Philippine Savings Bank (PSBank) president Pascual Garcia III said a representative of the Anti-Money Laundering Council (AMLC) had asked for photocopies of Corona’s signature cards during an audit, and that a team from the BSP and AMLC conducted a bank-wide audit of PSBank records.

The disclosure raised the possibility that the AMLC leaked photocopies of Corona’s signature cards to the prosecution.

According to Garcia, PSBank was advised to put the notation PEP on Corona’s records and that under AMLC rules, elected and appointed public officials were considered PEP and should be classified in bank records as such.

Senator Panfilo Lacson pointed out that BSP’s classification of PEPs and the audit of their accounts stemmed from BSP Circular No. 706 issued on Jan. 23, 2011.

Enrile responded and said: “If that is so, then we will ask them to explain how many people they have examined in violation of Republic Act No. 1405 (Bank Deposits Secrecy Act) and Republic Act No. 6426 (Foreign Currency Deposit Act), and send these guys to jail!”

Senator Edgardo Angara said: “We will. Give them a lawyer first.”

Senate Majority Leader Vicente Sotto III observed that while the circular was issued in early 2011, the BSP began auditing accounts of PEPs in September 2010, as Garcia had testified on Monday.

Angara moved that the committee on banks inquire into the scope, implications and source of authority of the BSP in classifying individuals as PEPs.

Angara inquired on the floor about the implications of the classifications of PEPs by BSP, and Enrile responded by saying that foreign banks don’t accept deposits from politicians because of PEPs.

Hearing this, Angara remarked: “It’s worse than I thought. This in effect constitutes a special witch-hunt for PEPs. You can be the subject of an audit, and your accounts could be the first to be examined. You can’t think of a worst case of invasion of your privacy than this because there is no authorization from the court.”

He added: “I thought this would imply deprivation or withdrawal of credit. It’s worse than deprivation of credit. I’ll join my colleagues in asking the banks committee to look into this administrative fiat.”

“We welcome the investigation because it’s an imputation (that) something’s wrong in the banking system and definitely the Bangko Sentral ng Pilipinas will not agree to that,” presidential spokesperson Edwin Lacierda said in Wednesday’s news briefing.

Lacierda said both the BSP and AMLC had denied getting access to Corona’s bank records.

“And that’s the reason why they came out with a strong statement, as well as the Anti-Money Laundering Council,” Lacierda said. “They have to clear their names and if an investigation will push through, certainly I believe BSP will be more than willing to appear before the investigation and explain the process.” With a report from Norman Bordadora