Senate race: Familiar, old and new faces mix it up 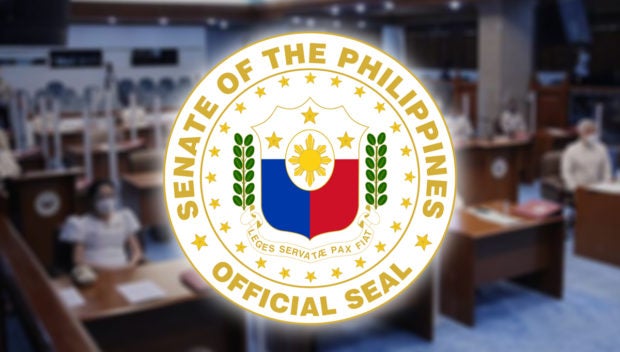 MANILA, Philippines—Following the week-long filing of certificates of candidacy (COC) and certificates of nomination and acceptance (CONA) for the 2022 national elections, aspirants for Senate seats have been listed by the different candidates for president and vice president.

The senatorial lineups were a mix of old names in politics, new faces and a combination of long-time allies and old foes on one list.

In the end, only 12 senatorial candidates will be able to secure coveted seats up for grab in the upper chamber of Congress.

In case you missed it—or if perhaps you are looking for a collated list of the Senate slates—below are the senatorial candidates who were endorsed to run under the tickets of presidential and vice-presidential candidates.

READ: COC filing week: The old, the new, and the future 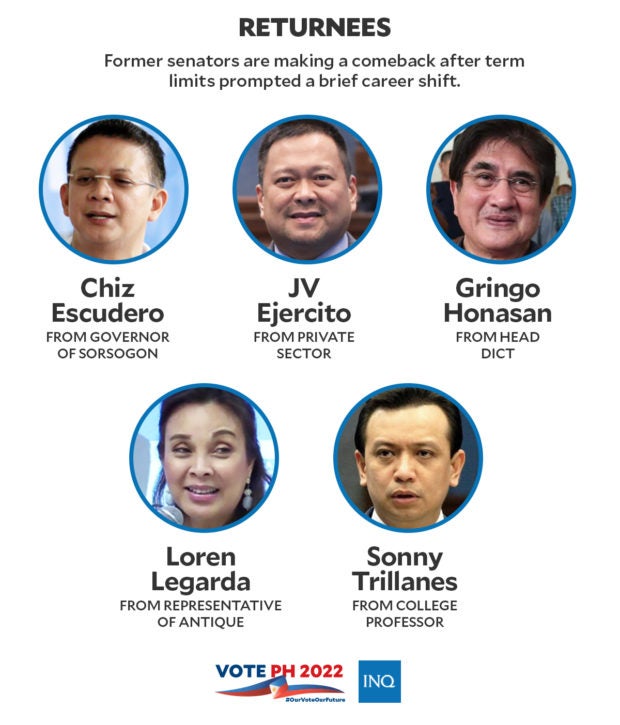 First off is the list of candidates who are included in the senatorial slate of Vice President Leni Robredo and Sen. Francis Pangilinan.

The list stirred controversy over two candidates who were known as foes in the past—Binay and Trillanes. 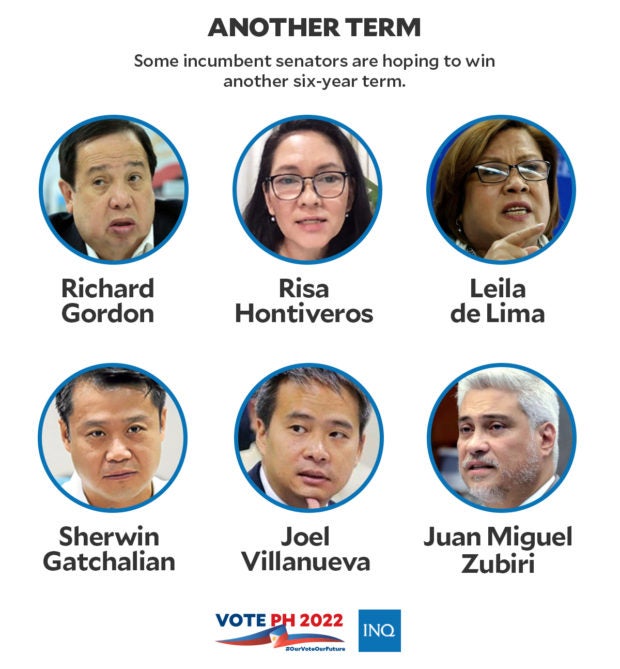 The animosity between the two prominent politicians stemmed from a Senate investigation into alleged corruption in Makati City, which was then headed by Binay.

Still, despite the differences and past feuds among her senatorial aspirants, Robredo said the candidates have committed to work together.

“When we look at the 11 candidates in our slate right now, they have different experiences and history. But what’s most important is when we asked for unity, their readiness to set aside their past was there,” she said at a press briefing.

“I believe no one is perfect among us, including myself. No one is perfect but what’s most important is the commitment and readiness to sit and listen to the different perspectives and craft a plan and agreement to operationalize our aspirations. They were the ones who showed us that readiness,” she added.

Many also noticed that senatorial candidate and former Bayan Muna Rep. Neri Colmenares was missing in the almost complete lineup. 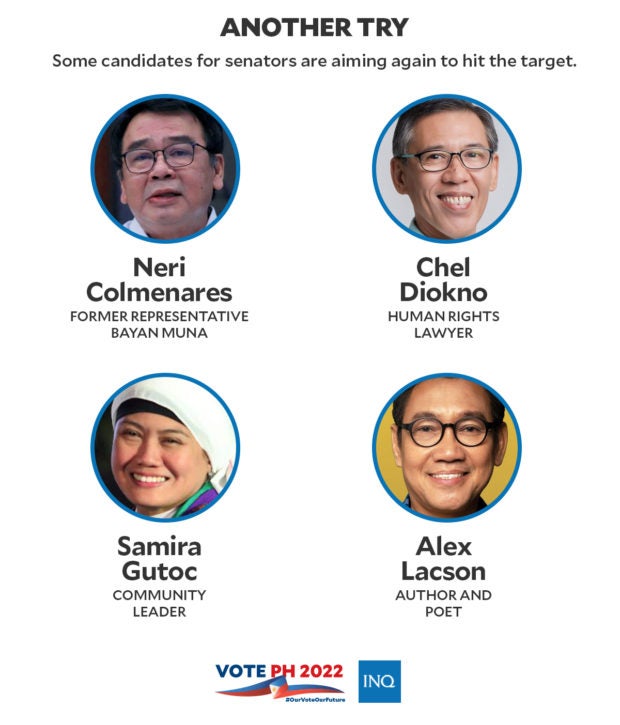 The activist politician, who can still be included on Robredo’s senatorial list which only has 11 candidates as of now, said he understood Robredo’s list.

“Vice President Leni Robredo’s decision on who to include in her senatorial slate is her prerogative as the presidential candidate. My non-inclusion in her slate at this time is based on what she thinks is best for the interest of her candidacy,” Colmenares said.

Next, the senatorial lineup of Sen. Manny Pacquiao’s faction in the PDP-Laban party. 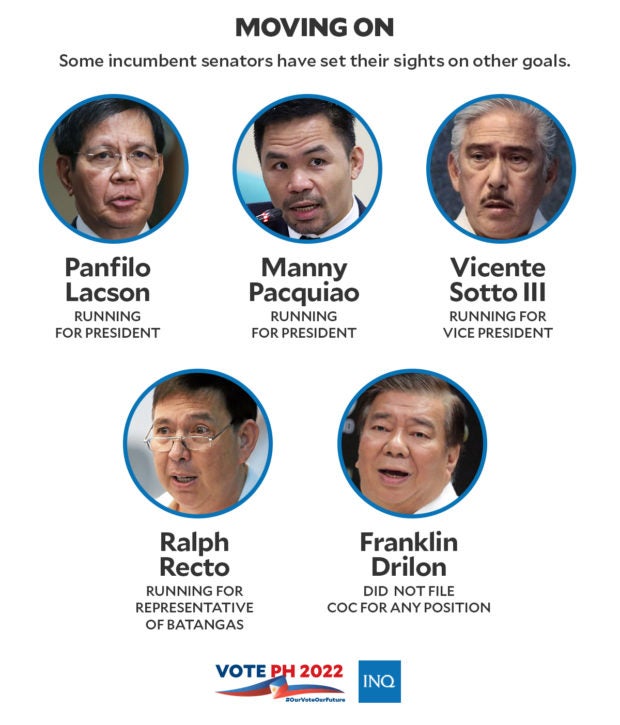 Pacquiao, who had filed his COC for president alongside his running mate deputy Speaker and former Manila mayor Lito Atienza, announced 10 names in his senatorial ticket—which likewise included some guest candidates.

“We have a senatorial lineup. We did not complete it because there are many guest candidates for senators and we are not cornering them… they can choose to be guest candidates,” Pacquiao said earlier.

Their senatorial slate include: 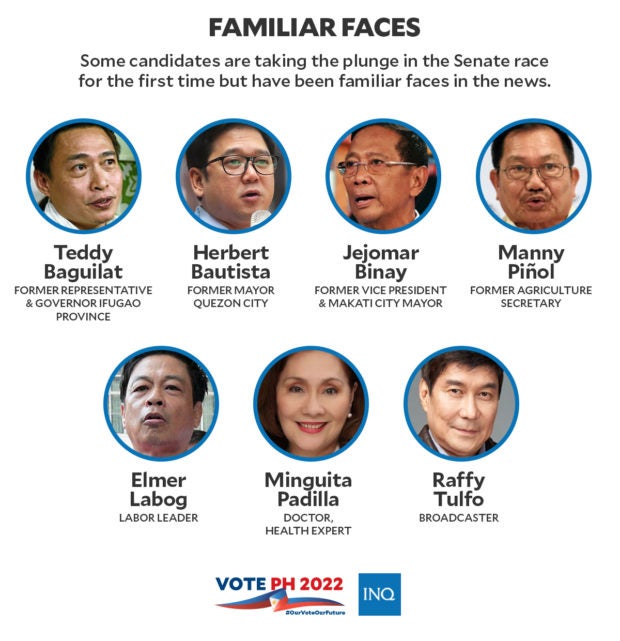 Lacson earlier said he and his running mate were planning to adopt 14 deserving senatorial candidates, instead of only 12.

“Our initial plan is to adopt all 14 and we are only adopting them and we will campaign because we feel that they are the ones qualified to go to be elected as senators of the republic,” he said.

Presidential aspirant and veteran labor leader Ka Leody de Guzman, who will be running under Partido Lakas ng Masa (PLM) party, also publicized the candidates whom he chose to be in his Senate slate.

Among the names that he endorsed were his party mates including:

He likewise expressed support for the following candidates, who are not running under his party:

“They are not my party mates but I trust them very much,” De Guzman said in a tweet.

“This is not transactional politics. I trust their vision for our country,” he added.

Senatorial candidates under the umbrella of Aksyon Demokratiko party were in the Senate lineup of Manila City Mayor Francisco “Isko Moreno” Domagoso and his running mate Doc Willie Ong.

Former senator and presidential candidate Ferdinand “Bongbong” Marcos Jr., son of the late dictator Ferdinand Marcos, has yet to announce his Senate ticket.

Most of the senatorial slates from the different presidential and vice-presidential tandems included so-called “guest candidates.” 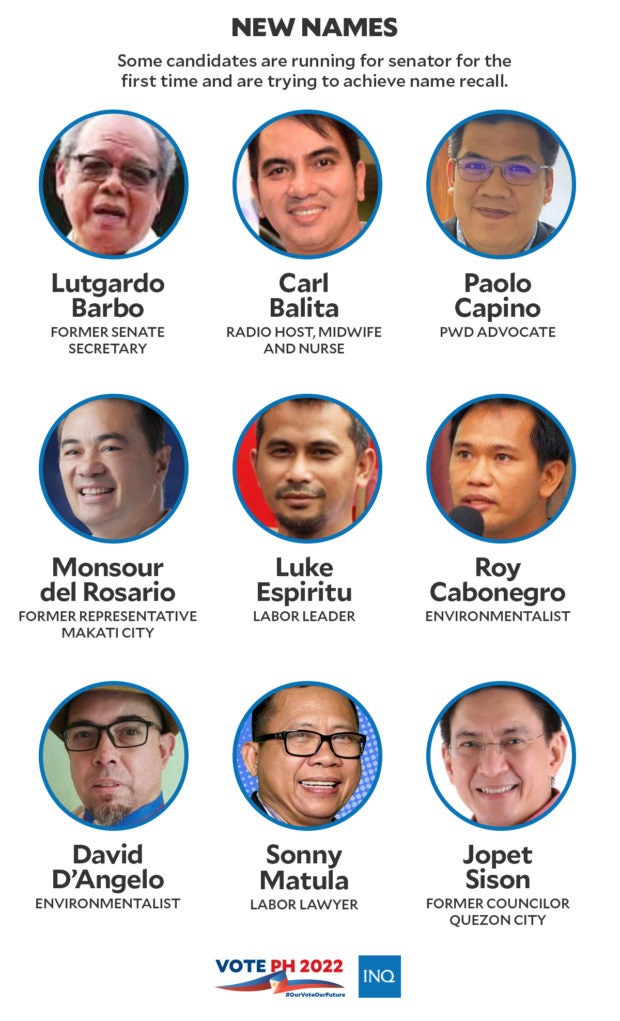 Under Section 70 of the Omnibus Election Code of the Philippines, “a political party may nominate and/or support candidates not belonging to it.”

However, prior to the 1985 Omnibus Election Code, guest candidacy was almost prohibited by the late dictator Ferdinand Marcos.

The first section under Presidential Decree No. 1661 stated that it is “unlawful for any registered or accredited political party to nominate and/or support as its official candidate any person belonging to another accredited or registered party unless he has affiliated with the nominating party within six months before the election.”

The presidential decree signed by Marcos on Jan. 3, 1980, was amended on the very same day, effective under the issuance of Presidential Decree No, 1661-A.

On January 26, 1980, the decree was further amended to read as follows:

“SECTION. 1. Guest Candidacy. — It shall be unlawful for any registered or accredited political party to nominate and/or support as its official candidate any person belonging to another accredited or registered party unless he has affiliated with the nominating party unless he has affiliated with the nominating party at least six months before the election: Provided, that a person who participated as an officer in the campaign of a political party, group or aggrupation in the immediately preceding elections shall be deemed a member of such party as of the date of the political campaign, for purposes of nomination as official candidate of such party in succeeding elections.”

Among the incumbent senators from the 18th Congress who are running for reelection were:

Some candidates were previously elected as senators and are hoping to return after term limits drove them into a hiatus:

Some familiar names, who either ran in previous elections or are well-known personalities in politics, also entered the senatorial race.

While familiar faces flooded the senatorial lineup, there were still new names included in the mix, such as: