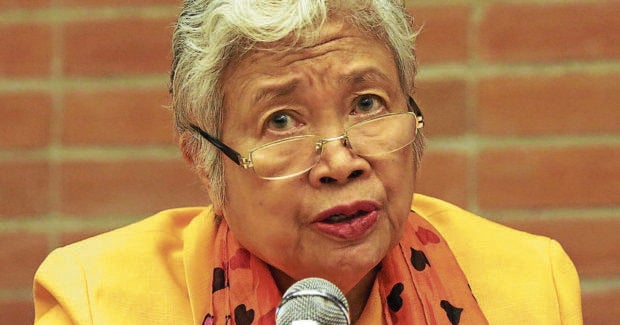 MANILA, Philippines — A new hybrid of gumamela has been named after Education Secretary Leonor Briones.

As part of its Women in Public Service series, the University of the Philippines Los Baños (UPLB) named the Hibiscus rosa-sinensis after Briones to recognize her contributions in basic education reform and for setting the standard for public servants.

Glenn Gregorio, director of Southeast Asian Regional Center for Graduate Study and Research in Agriculture, nominated the Department of Education (DepEd) chief while the UPLB screening committee on naming hibiscus, mussaenda and other ornamental plants endorsed her appointment.

“I am humbled and deeply honored to have a wonderful variant of gumamela named after me. As a nature lover and educator, I appreciate UPLB’s Women in Public Service series that recognizes outstanding Filipino women in government,” Briones said.

The education secretary emphasized in her speech the need to teach research in basic education to nurture the students’ appreciation of science, nature, culture, and the arts.

Briones, 81, for most of her professional career has been teaching children in church schools and students in undergraduate, master’s and doctoral studies.

She is also a professor emeritus at the UP National College of Public Administration and Governance since 2013. She specialized in civil society studies, fiscal policy, Philippine administrative system and public fiscal administration.

At the DepEd, she led the Sulong EduKalidad campaign that is focused on enhancing the quality of basic education in the country.

Amid the pandemic, she oversaw the development of the learning continuity plan, which is DepEd’s effort in ensuring continuous learning while protecting the health and well-being of teachers, learners and staff.

However, an alliance of student councils and publications from high schools and universities expressed dismay at the recognition given to Briones.

The Rise for Education UPLB cited the noninclusive approach of the online distance learning setup, adding that Briones, along with Commission on Higher Education Chair Prospero de Vera “turned blind to the students’ clamor” on the safe reopening of classes. INQ