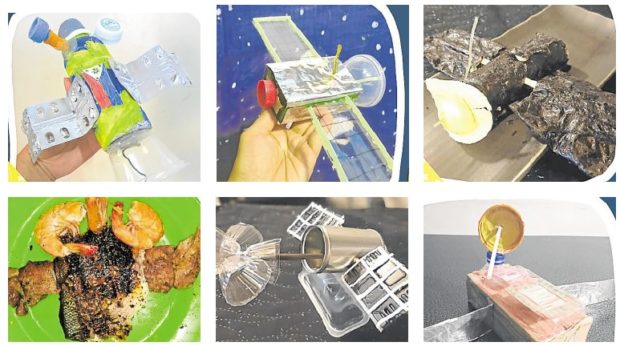 As part of the World Space Week celebration, kids age 9 and 10 years old took part in the agency’s “Build Your Own Model Satellite” event earlier this month.

The winning piece in the recyclable materials category used an old bottle as the body of the satellite while medicine blister packs and bottle caps served as the spacecraft’s other components.

For the edible category, the satellite model that used sushi and nori emerged at the top spot while the other entry used daing na bangus as the satellite’s body, and shrimp and fried pork became the vehicle’s equipment.

Aside from the competition, Ariston Gonzalez, engineer of the country’s Diwata microsatellite, also held a virtual lecture to introduce the participants to the development of satellites.

Gonzalez underscored the importance of building these spacecraft for Earth observation, internet, telecommunication, navigation, and habitation purposes such as the International Space Station.

“We hope that this will further spark more curiosity to learn more about space science and help discover new knowledge and new ways to improve our understanding of the moon, the stars, the planets, and the universe,” said Ruby Cristobal, Chief Science Research Specialist of the Department of Science and Technology, during the closing program.

Joseph Gutierrez of the Department of Education’s bureau of curriculum development urged the participants to continue learning, adding that with their new knowledge on artificial satellites, he is looking forward to seeing these children as future space scientists.

“Building out of something is an ability that may come naturally but can also be developed given the right conditions, especially with the support of parents. We hope to see our next generation of space scientists from these kids,” he said. INQ