Biden says policing is as hard as ever, vows reform 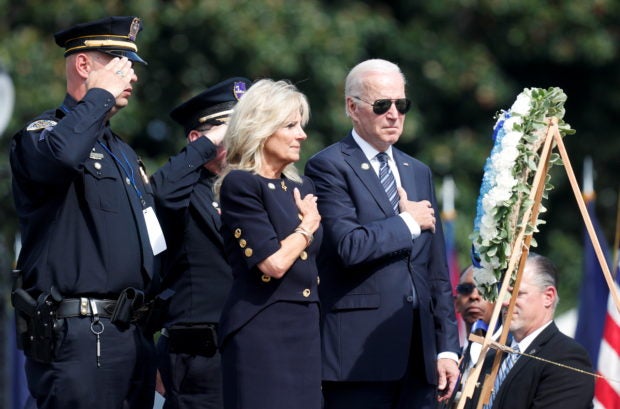 WASHINGTON — U.S. President Joe Biden on Saturday vowed to move forward with policing reform, telling a gathering honoring slain officers that their profession is called on to do too much.

“We expect you to be everything,” Biden said in a speech in front of the U.S. Capitol, mourning 491 law enforcement officers who died at work in 2019 and 2020. “We expect everything of you.

“And it’s beyond the capacity of anyone to meet the total expectations,” he said. “Being a cop today is one hell of a lot harder than it’s ever been.”

Biden’s own drafting of his remarks came as he learned of a shooting earlier on Saturday in Houston, which left one deputy dead and two injured. Biden expressed sorrow for the incident.

Biden has been a loyal ally to law enforcement, dating back to his days in the Senate when he crafted a 1994 crime bill with their help.

But his support for broad reforms following the 2020 murder of George Floyd in Minneapolis by an officer created some tension with police groups opposed to some of the reforms promoted by Democrats.

Efforts to reach a bipartisan police reform deal failed in September, marking a setback for the Democratic president, who campaigned on taking such action.

Biden on Saturday credited the FOP with “sincerely trying to reach an agreement.” He added, “We haven’t gotten there,” but “must” do so.

The president said he would work to get police departments the support and funding they need. Biden has already asked Congress for hundreds of millions of dollars to help law enforcement agencies with training and recruitment,

Biden has also said he will explore further executive actions he can take to help hold police officers accountable for breaking the law. Officers, he said, need more backup from mental-health and other professionals to deal with issues they face on the streets.

Biden credited law enforcement agencies with upholding U.S. democracy during the Jan. 6 riot at the Capitol.

And he repeated his proposed measures to reduce gun violence, including against officers, a set of efforts that has also largely stalled given insufficient support in Congress, which Democrats control by only narrow margins in both chambers.

Nearly 50 officers have been killed this year by gunfire, according to the FOP, more than in all of 2020.

The National Peace Officers’ Memorial Service began in 1982 as a small gathering of approximately 120 survivors and supporters of law enforcement. It has since turned into a series of events, attracting thousands of officers and the families of victims to the nation’s capital each year.

The White House issued a proclamation ordering flags to be flown at half-staff at public buildings on Saturday.