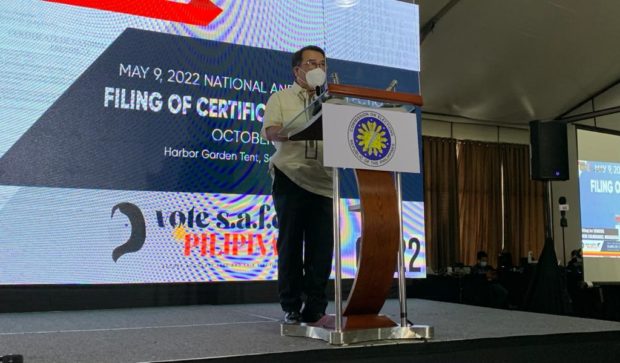 File photo shows Bayan Muna chairman and former Rep.Neri Colmenares after he filed his certificate of candidacy (COC) for senator.

In a statement, Colmenares said the endorsement of Pacquiao for him and Kilusang Mayo Uno Chairman Elmer Labog, who also joined the senatorial race, is “a sign that he (Pacquiao) recognizes the need for candidates in the Senate that will push for the legislative agenda of workers, the farmers and the marginalized sectors in  our country today.”

“I wish to thank Sen. Manny Pacquiao, for including me as one of the guest candidates in his senatorial slate,” said Colmenares.

“The recognition and support of a presidential candidate, like Sen. Pacquiao, is very important for candidates like me who rely on the support of ordinary Filipinos in our campaign. We value such unconditional endorsement,” he added.

Colmenares likewise thanked De Guzman for including him in his senatorial lineup.

“I am glad that he considers me, and KMU Chairman Elmer Labog, as candidates who carry the interest of the workers in our country and deserving of the support of the workers and the people,” the former Bayan Muna party-list  lawmaker said.

“While we continue to push for the unification of the opposition in the country to defeat the efforts of Duterte and Marcos to return to Malacanang in 2022, the inclusion of pro-people candidates in the senatorial slates of different presidential candidates is certainly a very positive development,” he added.

Colmenares earlier said his non-inclusion, so far, in the senatorial lineup of Vice President Leni Robredo will not distract him in pushing for people’s agenda.

Robredo earlier named 11 candidates in her senatorial slate and said she wants the 12th member of her lineup to represent the marginalized sector.