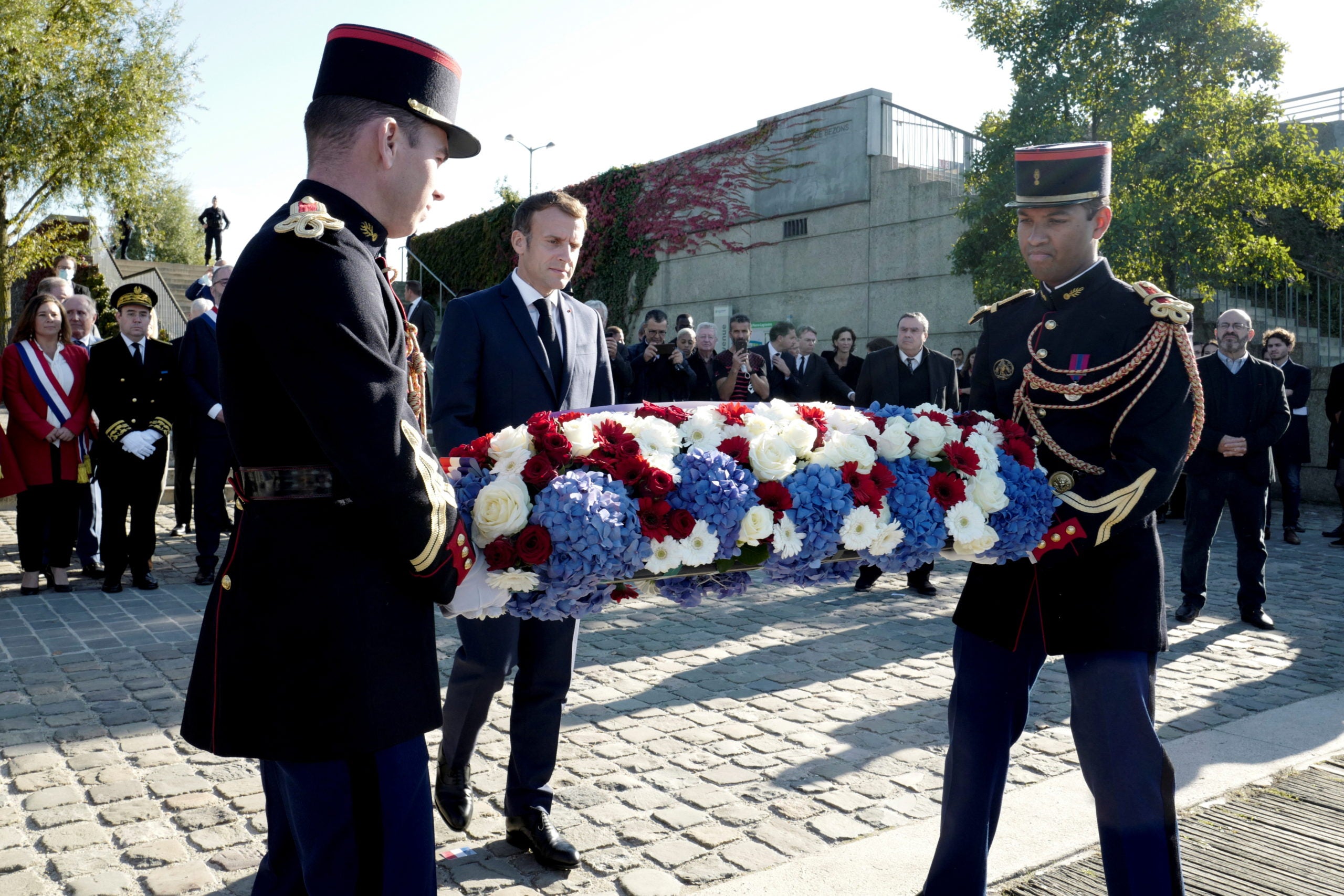 French President Emmanuel Macron lays a wreath near the Pont de Bezons, Bezons bridge, during a ceremony commemorating the 60th anniversary of the massacre of October 17, 1961. Rafael Yaghobzadeh/Pool via REUTERS

PARIS — Emmanuel Macron on Saturday denounced as an “unforgivable crime” a bloody crackdown on Algerian protesters by police in Paris 60 years ago, the strongest recognition by a French president of a massacre in which many bodies were thrown into the River Seine.

On Oct. 17, 1961, under the orders of then Paris police chief Maurice Papon, police attacked a demonstration by 25,000 pro-National Liberation Front (FLN) Algerians protesting against a curfew imposed on Algerians.

The march was repressed “brutally, violently and in blood,” Macron’s office said in a statement, adding that some 12,000 Algerians were arrested, many were wounded and dozens killed.

Macron attended a ceremony commemorating the anniversary at the bridge at Bezons, west of Paris, from where some Algerians had started their march and where many bodies were recovered from the Seine.

“He admitted the facts: the crimes committed that night under the authority of Maurice Papon are inexcusable for the Republic,” the Elysee Palace statement said.

The massacre, which took place during the war against French rule in Algeria, was long denied or concealed by French authorities. The first commemorations of the event were organized in 2001 by the mayor of Paris.

The precise number of victims was never established, with some historians putting it at over 200 dead.

This year’s commemoration takes place amid diplomatic tensions between Paris and Algiers.

Early this month Algeria recalled its ambassador to Paris, citing comments attributed to Macron, who was quoted in the Le Monde newspaper as saying Algeria’s rulers had rewritten the history of its colonization based on “a hatred of France.”

Read Next
France pays tribute to teacher beheaded over Mohammed cartoons
EDITORS' PICK
Metro Manila to remain under COVID Alert Level 2 until December 15
Legarda: Ending Violence Against Women, a cause for all
A delightful blessing!
Duterte open to making jabs mandatory; Cabinet mulls ‘pressuring’ the unvaccinated
IATF tightens border control, suspends entry of fully vaxxed nationals from ‘green’ countries
Villar Group gears up for AllValue Shopping Party on Dec. 3; around P 1-million promos and discounts up for grabs
MOST READ
Quiboloy warns of ‘much worse than Omicron virus’ if his ‘persecution’ is not stopped
Bongbong Marcos’ conviction in tax case not a crime involving moral turpitude — lawyer
Marcoleta defends pol ads on ABS-CBN
IATF tightens border control, suspends entry of fully vaxxed travelers from ‘green’ countries
Don't miss out on the latest news and information.