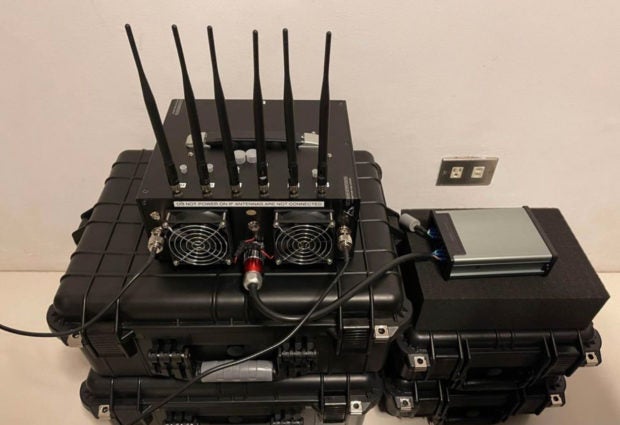 UNREGULATED A radio gear like this, which is used for text blasts, is illegally being sold on e-commerce sites—and right under the nose of the National Telecommunications Commission. —CONTRIBUTED PHOTO

MANILA, Philippines — Both the National Telecommunications Commission (NTC) and the telecom companies must explain how “fraudsters” were able to hack the government’s emergency text blasts and send campaign materials, Senator Grace Poe said on Friday.

Poe said in a statement that they passed Republic Act No. 10639 or the Free Mobile Disaster Alerts Act or Republic Act 10639 to ensure that people are informed of possible natural and man-made disasters and not for campaign materials.

“We passed the Free Mobile Disaster Alerts Act or Republic Act 10639 to protect our people through prompt warnings in the event of natural and man-made calamities,” Poe said.

“Emergency text alerts can save lives. They must not be used by fraudsters that could endanger the safety of our people,” she added.

The senator’s statements came after several individuals got emergency messages last October 6 which appeared to be campaigning for former senator Bongbong Marcos, who is running for president in the 2022 national elections.

This came amid Marcos’ filing of his certificate of candidacy before the Commission on Elections.

According to Poe, who is chairperson of the Senate committee on public services, they are expecting NTC’s investigation to be quick yet at the same time thorough.

“We expect the investigation of the NTC to be swift but thorough to yield results that would also curb the proliferation of illegal devices used in spreading misinformation,” she explained.

“It is also incumbent for the country’s telecommunications companies to explain how the messages were sent in the guise of emergency alerts.  We must safeguard our people against spammers and scammers that could plague the wireless messaging services,” she added.

Critics of Marcos and his father, late dictator and former president Ferdinand Marcos, asked for an investigation on the issue.  But the Marcos camp also said they want a probe as they believe these are the work of sectors trying to sabotage the former senator’s presidential bid.

READ: Use of emergency alerts for Marcos’ campaign is meant to derail his candidacy, lawyer says

Marcos is running in the 2022 national elections under the Partido Federal ng Pilipinas (PFP), vowing to provide a unifying leadership in the country.  However, several sectors critical of his family’s reign during the martial law era said that even Marcos’ candidacy is an affront to the victims of abuse and killings.